It has been discovered that Tom O’Carroll, who has been convicted of child sex offences and campaigned in the past for the Paedophile Information Exchange (PIE), managed to join the Labour Party in his current home town of Barrow. This horrified local MP John Woodcock, whose energy of late has been mainly deployed in rubbishing his own leadership and then asking why the party is not united in attacking the Tories. 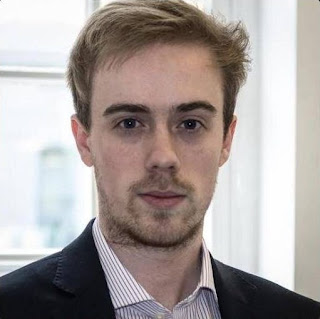 Still claiming to be a journalist. No, don't laugh

O’Carroll has now been suspended by Labour, but in the meantime the right-leaning press has been creatively retelling his presence on the membership list, with the most creative spin being applied by the perpetually thirsty Paul Staines and his rabble at the Guido Fawkes blog, where newly anointed teaboy Alex “Billy Liar” Wickham has lived up to his nickname in no style at all and used the ruckus to do a little smearing.

“Labour Suspends PIE/Hacked Off Supporter” tells Wickham’s headline, going on to explain “O’Carroll, who has a string of convictions for child sex offences, is also a backer of Hacked Off, attending their event in parliament with John Cleese last year”. The lobby event, held in Committee Room 14, was, to no surprise at all, open to anyone who could figure out how to use the EventBrite website to get a ticket. Including Wickham.

So if O’Carroll was there, it did not mean he was a “backer” of campaigning group Hacked Off. Indeed, the clueless Wickham then makes that very point: “Guido was in the room but failed to spot him among the crowd”. The “Guido” in question was Wickham, whose presence was rumbled and duly ridiculed, before he sulked out. By his own logic, Alex Wickham is a “backer” of Hacked Off.

I’ll go further: if O’Carroll was there - and Wickham, as so often with the Fawkes rabble, fails to pony up any evidence to support his claim - his status at that event was the same as that of the Fawkes teaboy. Indeed, the diminutive and rodent-like Wickham, in his over-large coat - if only they sold them in your size, eh, Alex? - did look just a teensy bit creepy as he hunched furtively over his smartphone.

Why, then, given he is standing in an extremely draughty glasshouse, is Wickham smearing Hacked Off in such an easily debunked way? Ah well. Here two considerations enter. One, despite the Fawkes folks losing their Sun column recently, they retain their position as press establishment sell-outs. As a result of this, smearing Hacked Off is de rigueur. It is one of the hoops through which they must periodically jump.

And two, the Fawkes modus operandi features a vindictive streak, something Staines has engendered over the years. Wickham’s presence, and the way he was using it to spread his mixture of falsehood and misinformation, was exposed and he was roundly condemned for his puerile tactics. For that, there has to be payback, however lame the result.

The Fawkes rabble scrape the barrel once again with their smears and dishonesty. For this, their media masters might throw them a biscuit. No change there, then.
Posted by Tim Fenton at 10:31

I stopped following the great Guido yesterday. Used to be quite funny, like a parody account, but as they don't seem to see the humour in them trying to pass themselves off as journalists, and not being journalists, not getting how important facts are, and just saying something does not make it true. Alex called me a twat last week. But be fair, I did call him an idiot. Which he did not deny......

@jelltex
I wouldn't worry - give it a couple of years, all he'll be famous for is being Brooks Newmark's pussy... ;-)

Good move. Those vulgar excuses for men have debts with karma.

His head smashed in
And his heart cut out
And his liver removed
And his bowels unplugged
And his nostrils raped
And his bottom burnt off
And his penis split and his...

Bravely taking to his feet
(I never did!)
He beat a very brave retreat
(All lies!)
Bravest of the brave, young Wickham!
(I never!)

They're not journalists; they're a bunch of rich idlers passing off second hand gossip from Westminster insiders they once went to school with as breaking news. That's some of it anyway. The rest is mistaking being rude to people online for actually doing a job.

If I met Fawkes and Wickham
I'd tell them where to stick em
One of them a fatty
One of them liked batty?

If your looking for the truth
They are infecting the youth
Lots of smears and heaps of tears.
Hanging out with Ginger beers