Still unable to go full Europhobia on its readers, the Super Soaraway Currant Bun has today used the upcoming EU referendum as a way of advancing the pretence that it is on the side of the little people, all those small business folk, like the white van men in championed briefly last year when it chimed with bashing the Labour Party. The only problem is that the hypocrisy is all too clearly on view.

Foreign. But not like the kind of foreigners who were born in Australia and hold United States citizenship. The double standards just keep on coming: “is Mr Cameron blind to the public rage against big corporations and bankers since the recession?” Big corporations. But not the kind of big corporations that ran the now-defunct Screws, which was as close as the press got to a criminal enterprise masquerading as a newspaper.

Big corporations. But not the kind that strong-arm Governments into green-lighting the takeover of that 61% of Sky that they do not already own. And it gets worse - a lot worse: “Buddying up with a few dozen selfinterested [sic] millionaires to browbeat the little people is not a good look”. Self-interested millionaires. But not the kind who run most of the press, and shit on the little people at will, just to flog a few more papers. 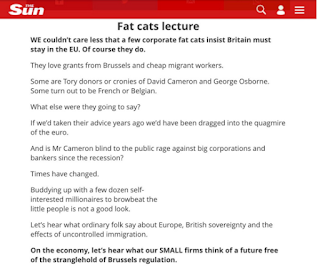 The Sun is in a difficult place right now. The hacks can’t tell which way the wind is blowing, but they want to pick the winner. And they dearly want Cameron on side for their next Sky bid. All of that with a fast declining readership. Couldn’t happen to more deserving shower.
Posted by Tim Fenton at 10:31

All it needs is for the Murdoch scum to be omitted from bidding for footy TV rights.

Then we can start to fumigate our national culture to rid us of its current Murdoch/Rothermere stink.

But let's face it: Any nation that even marginally pays for and supports the propaganda activities of a tenth rate OzYank boot boy and his brats deserves all it gets, including the corrupt rat hole that is Mistake-on-Thames.

Interesting that the S*n is also using the torygraph method of "no comments allowed" when ever it says something it knows the general public, including on the right, are going to slate.

The torygraph has a blanket ban on comments when ever IDS pronounces his "beliefs", likewise the S*n has a blanket ban on its editorials... cant let the plebs disagree with their betters now can we, especially when most of the comments would be pointing out how Murdcock (a rich evil cnut, and - worse - a non-dom tax avoiding "forenner") is always trying to tell us what to think and believe.

Likewise, the second issue on the page of Doctors strikes... it knows its going to lose the argument to the plebs, so dare not let the plebs have a say.

I see Rupe has been bugging up Michael Gove on Twitter, saying something about principles. Ha ha ha.......sigh.

I wonder if any of the S*N journalists (I use that word because I can think of no other to describe what they are supposed to do) would like to investigate this little nugget?