The Sun’s alleged “Westminster Correspondent” Harry Cole has today taken out his automatic tabloid outrage quote generator to pen a monumentally lame hatchet job on actor Emma Thompson, who has committed the heinous crime of Being In Possession Of One’s Own Opinions With Malice Aforethought, as well as being suspected of Long Term Membership Of The Labour Party With Intent. 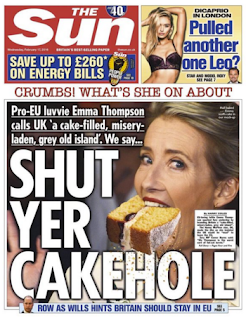 As Ms Thompson’s opinions are not in accordance with his own, her presence has clearly caused Master Cole considerable distress, so much so that he and his fellow Murdoch doggies have brought forth the headline “Crumbs! What’s She On About … Pro-EU luvvie Emma Thompson calls UK ‘a cake-filled, misery laden, grey old island’. We say SHUT YER CAKEHOLE”. As Sir Sean nearly said, I think we got the point.

The ecstatic moment of headline creation was clearly too much for the Sun’s subs, who then make the elementary howler of calling the author of this turgid dirge “Harry COLES”. Still, the readers will be none the wiser - as usual. So what campaign event had Ms Thompson spoken at? Well, she hadn’t: she was talking at the Berlin Film Festival. 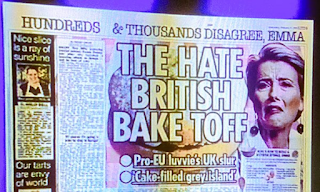 And what had she said that so offended Master Cole? “I feel European even though I live in Great Britain, and in Scotland as well … So of course I’m going to vote to stay in Europe. Are you kidding? Oh my God, of course. It would be madness not to. It’s a crazy idea not to”. She expressed her personal view. She is entitled to do that.

But that thought was not allowed to enter as the Flannelled Fool (for it was he) roped in a series of Tory MPs to give him quotes, from the repellent Stewart Jackson, through nominally Tory MEP Dan, Dan The Oratory Man, to James not-very-Cleverley and creepy Conor Burns. All passed severely adverse comment on the idea that someone who disagreed with them should be allowed to air their views in public. 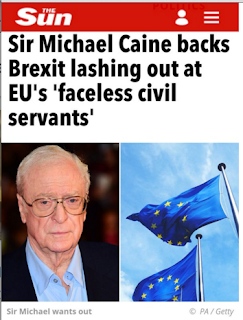 ... with another rule for another actor

Then, to top all of that, the print edition tells of “THE GREAT BRITISH BAKE TOFF”, at which point bullshit detectors everywhere should be sounding long and loud. Who is writing this hatchet job? Why, an alumnus of Tonbridge School, that’s who: Master Cole’s alma mater charges more for boarders than Eton. He’s no room to call “toff” on anyone.

It gets worse: the Sun is being doubly hypocritical in going after Emma Thompson after they rolled out the red carpet for Michael Caine, who did not get called an “overpaid luvvie” when he expressed his personal opinions about the EU. But then Caine, who like Ms Thompson is a double Academy Award winner, favours leaving the EU, not staying in, which chimes with the accepted wisdom (cough) at the Sun right now.

That “wisdom” holds, roughly, that those wanting to leave the EU are distinguished actors whose opinions we should all respect, while those taking the opposite view are jumped-up “Champagne Socialists”, ripe for having their reputations trashed by over-nourished mouth artists who long ago left their principles at the door. No surprise there, then.
Posted by Tim Fenton at 15:17

Slightly off topic but here goes:
3rd consecutive day their front page has had a Revenant connection. Wonder why....

Seems to me the Falklands threatened by Corbyn is a classic 'dead cat' story as things don't go so smoothly with those European chaps.CCHQ can't get their tax dodging media owners onside even if it involves telling lies about Corbyn plus finessing the legacy of the saintly Margaret.

Just a case of jealousy, for the unachievable heights, of the low life who also have to write hate speech for owners who seek to counter any adverse opinion to their own especially when it comes from an intelligent source.

so how does The Sun know "hundreds of thousands disagree Emma" and in a population of approx. 64 million so what?

They have "ways and means" you know. #taps nose and winks surreptitiously.

And if the information gleaned doesn't tie in with the perceived wisdom of the owner they just make it up c/o their fiction department i.e. Master Harry with research gathered from his cake eating ability (although that would be hundreds and thousands).