Brexit Gang Of Six - No Thanks

After yesterday morning’s cabinet meeting, those ministers who wanted to campaign for Britain to leave the EU were free to do so. But who were these towering figures? Among those the Outers wanted to lead their campaign, Theresa May and Sajid Javid have both decided to back Cameron. Who would lead? We soon found out: just six of the 30 who attend cabinet fetched up at the Vote Leave campaign. 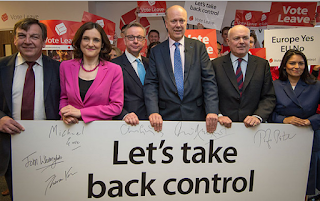 Would you buy a used car from any of these people?

And what a motley band they were: Priti Patel, self-promoting MP for Witham, who has endeared herself to all those hardworking Brits by smearing them as not just “idlers”, but “the worst idlers”, for a start. Then there is Chris Grayling, removed from his former role as Justice Secretary on the minor technicality of his being terminally inept. And someone called Theresa Villiers, who most people haven’t heard of.

This left just three allegedly major figures, the most well-known of whom was Michael “Oiky” Gove, whose very presence will drive most of the education profession into the Remain camp. Gove has written an apologia for his being out of step with his pal Dave, in which he claims without a hint of irony that “The EU is built to keep power and control with the elites rather than the people”. One elite is missing there, eh “Oiky”?

Gove was, before his entry into politics, a journalist and indeed leader writer for the Murdoch Times. This has served him well: he has a ready-made network of conduits through which stories can be leaked, and his press pals have wasted no opportunity to talk up his allegedly wonderful education reforms, while denouncing anyone objecting to them as rotten lefties and blinkered fifth columnists.

Michael Gove knows all about elites, as he is part of one of the biggest: the press establishment. Moreover, his former patron Rupert Murdoch despises the EU, a body which actually tries to hold power to account. No wonder Gove is dancing to the tune of His Master’s Voice. And then there is the pathologically dishonest Iain Duncan Cough, who has waded into the EU debate with characteristic lack of subtlety.

Duncan Cough has told that the UK could risk “Paris style attacks” by remaining in the EU. His intervention has echoed the sentiments of Nigel “Thirsty” Farage, and far from offering hope and optimism, has decided to frighten the voters by raising the spectre of Scary Muslims (tm). He also talked about “open borders”, except we don’t have one.

And finally there was John Whittingdale, still looking happy and optimistic, despite the very real prospect of Natalie Rowe getting the story that the Independent spiked into the public domain. We know that Ms Rowe has the photos, and that whatever they show would not be good for Whitto. Yet the Outers are depending on his presence.

How appealing is that half-dozen? Not appealing at all, thanks. With Michael Gove in the lead, it will come over like an appeal for votes from Elmer Fudd. The thought enters that Cameron would be well rid of the lot of them come late June.
Posted by Tim Fenton at 15:20

Looking at the wider list of Outers and one finds all the psychos, liars and swivel-eyed loons. Lord Lawson? Liam Fox? And from the other side the appalling Kate Hooey. There must be a small island in the mid Atlantic we can give them.

Ship them all to the Falklands where they can celebrate Margret Thatcher in perpetuity. (Although it was her "Wider Europe rather than deeper" to appease the swivel eyed that has resulted in the current immigration situation)

Just reading their opinions and looking at them tells you all you need to know about this gang and their type.

No wonder they're held in contempt by anybody with a sense of fairness and decency.

Thing is, I agree this lot are 'Nasty Party' creeps - but I'm still voting out

Thing is, I agree this lot are 'Nasty Party' creeps - but I'm still voting 'out'

I look at that photo and think 'fairground'. Get them all and you win the cuddly monkey.

I have seen a report that describes Gove as an "intellectual heavyweight".
You couldn't make it up.

Compared to Grayling and Duncan Smirk, I suppose he is.