Thirteen climate activists who participated in a campaign of non-violent direct action which resulted in some flights being unable to take off and land at Heathrow Airport recently were told at their trial to expect a custodial sentence. Such an action would have been unprecedented. There was widespread concern at what was seen as an escalation in the kinds of punishment being meted out to such protesters. 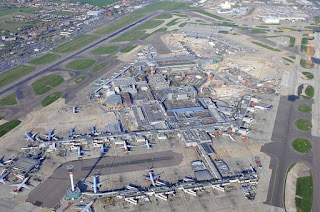 But not everyone was concerned: out there on the right, there were some ready to cheer the thought that the hated greenies would be carted off to the clinky in short order. I mean, someone might have had their holiday delayed, which of course never happened to anyone else, ever. Someone could even have missed a business meeting. For this, the full force of the law had to be brought to bear on the perpetrators.

This characteristically unpleasant rant, written by the sneering James “saviour of western civilisation” Delingpole, told “what’s really unjust is this: thousands of holidaymakers and business travellers making their way to the airport to catch planes only to miss their flights because a bunch of spoiled trustafarians, unemployable Environmental Sciences graduates and professional wasters have gone and cut through the perimeter fence”.

There was, unfortunately, more: “only an utter loon would argue that the right to free protest extended to being given a free pass to ruin people’s holidays, disrupt their business meetings, jeopardise security and cause millions and millions of pounds of economic damage”. Good to see Del Boy getting his terms of abuse direct from Fox News Channel (fair and balanced my arse). 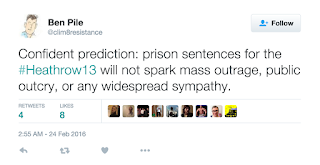 And on he ranted: “Scratch any green and what you’ll find underneath is an anti-capitalist kill-joy. For far, far too long these wanky, tinpot, hairshirt totalitarians have been dressing up their war on Western Industrial Civilisation as a moral crusade endorsed by science and justified by the greater cause of saving the planet … It is not, and never has been, anything of the kind … They’re self-righteous, misanthropic, puritanical, freedom-hating, Gaia-worshipping, spoilt trustafarian loons”.

Sadly for Snowden, Pile and Delingpole, common sense prevailed and the Heathrow 13 were given suspended sentences today, walking free from court. Far from raining down condemnation on them, the judge “said she was impressed by the defendants’ good character and commitment”. More that you can say for the Breitbart crowd.

So that’s environmentally sound Guardian readers 1, convocation of the irredeemably batshit at Breitbart 0. What a bunch of useless tossers.
Posted by Tim Fenton at 17:47

Chris Snowden is not just a Spectator writer. He works for the extreme free market fundamentalists at the Institute of Economic Affairs, Margaret Thatcher's favourite Think Tank.

Snowden has recently come to attention as the architect of the sock-puppet campaign. You can read how Snowden successfully persuaded the Government to gag charities, on Andrew Purkis' excellent blog www.andrewpurkis.wordpress.com