After Janet Smith’s report into the behaviour of Jimmy Savile and Stuart Hall was made public yesterday, despite the BBC giving the findings extensive publicity and Director General Tony Hall giving a full and fulsome apology, it was only a matter of time before that part of the press that hates the Corporation with a passion would use the exercise as a stick to beat it with. So they have, and none moreso than the Sun. 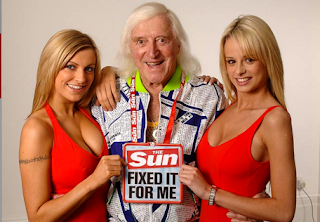 The Sun shows its disapproval of Jimmy Savile

The Murdoch faithful have gone in with both feet, from the screaming headline, “Revealed: Jimmy Savile dressed as Womble to rape boy of 10 … Depravity at BBC exposed in report”, to sub-headings like “Whitewash on bosses” and “Report ‘watered down’”. Added to this is the judgmental “Sun stories ignored”, letting readers know that the paper had Savile bang to rights in 1983, and is therefore totally blameless.

But while the Sun ran an article in 1983 where Savile boasted of picking up young women while running marathons, they did not make any claim of inappropriate behaviour with under-age girls - or boys. Nor was there anything about what he got up to on the BBC’s premises, on shows like Top Of The Pops and Jim’ll Fix It. I’ll go further: the Sun used Savile’s celebrity status to help flog more copies.

That is why the paper arranged for two of its Page 3 Girls to be photographed with Savile, an image which is widely available. It’s also why the Sun’s earlier claims were quietly shelved when he died: instead, there was a long and suitably reverential tribute under the headline “RIP JIMMY SAVILE”. Savile was described as a “telly legend”. He was “The cigar-waving star, best known for his show Jim’ll Fix It”.

Readers were told “Sir Jimmy was famed for his eccentric jewellery, charismatic presenting style and flamboyant clothes - mainly brightly coloured shell suits and tinted glasses … He was on Top of the Pops from its start in 1964 and presented the final show in 2006. He also claimed to have invented DJing”. He was “Madcap fundraiser Sir Jimmy, whose catchphrases included ‘Now then, now then’ and ‘How’s about that then?’”

The gushing eulogy went on “He raised more than £40million during his lifetime for various charities, including Leeds Hospitals … He took part in 217 marathons, 300 professional bike races and 107 professional wrestling matches … His Saturday night show Jim’ll Fix It granted wishes for thousands of children from 1975 until 1993 … Sir Jimmy’s charity continues to sponsor medical students at the University of Leeds to perform undergraduate research”. Not a dickybird about his less savoury side.

As to his singular status, all that the tribute said was “In an interview with The Sun earlier this year, the confirmed bachelor said of relationships: ‘I tried it but the longest I lasted was 11½ minutes, but I really tried. I'd made my mind up after nine’”. Expose Savile? They grovelled at his feet. He was good for business.

The Sun was as much a part of the Savile cover-up as the BBC. Pass the sick bucket.
Posted by Tim Fenton at 09:40

Smith has rightly exposed "a climate of fear" that existed at the BBC.

Anybody who works for any large organisation, public or private, will be able to recount similar intimidation on other issues.

But even the Savile evil pales into insignificance compared to mainstream media and Establishment moral corruption in the quarter-century shame of the Hillsborough cover up and assault on innocent families. In which of course the Scum was a prime - but not the only - mover of lies and smears. Leading it all was and is the cockney Nazi MacKenzie.

I don't have much time for Tony Hall or his far right propagandists in BBC News, but compared to Murdoch/Rothermere they look positive saints. At least until the next important news item.

Spot on, Tim. I remember at the time of his death, every obituary seemed to carry a line such as "although there were rumours, nothing was ever proved". There were jokes made about it. I've a copy of a Never Mind the Buzzcocks book (written and released long before he died) featuring a spoof introduction, purportedly from him, that pretty much says he's into kids and necrophilia. As Graham Linehan said, he was hiding in plain sight.

And how did he get away with it? Because of his lawyers, because of his connections, because of his public image. Without getting into conspiracy theory territory, he had protection from all over, from all sections of the media as well as the government. There is no other way to explain how so many professional people, from the BBC to hospitals and further, seemingly took leave of their senses and all established procedures when it came to him.

"the paper had Savile bang to rights in 1983, and is therefore totally blameless"

Any coincidence that he was ingratiating himself with The Thatcher around this time? It's not just the Beeb but a whole network of associated people that "knew" and did nothing. For whatever reason.

The Establishment protecrs its own and often at the expense of the "lower" classes.

Savile is only one of the BBC nonces. There is Uncle Mac, Chris Denning, Johnathan King, Garry Glitter, Chris Langham, John Peel, Wilfred Bramble, Rolf Harris, Stuart Hall. And these are just the famous ones, imagine how many of the back room staff were nonces. So stop trying to divert attention away from the BBC cover up.

From the review (11.39) referring to as long ago as 1973.
"Mr Collins claimed that the other two contacts remember speaking to him about Savile. One is Mike Day, who worked for the Press Association. He has told us that he recalls talking to Mr Collins about Savile and a story relating to possible misbehaviour with children; there was reference to a caravan. He thought that the concern was that the Daily Mail might publish an exposé of Savile."
I'd like to hear the Mail's comments on this.

"without getting into conspiracy theories"

But perhaps we should if there is no other rational explanation like Coulson being given clearance to act for Cameron, for instance, given his previous record.

This blog poses some biq questions which no one in the media has liked or dared to ask, at least publicly. Why?

@anon 12:06 - what about ITV Granada who don't seem to be mentioned? Stuart Hall left the BBC (very suddenly) and went to their local news department in 1990, where Fred Talbot was also a fixture, a man whose full time TV career took off with Granada AFTER he had resigned in very dubious circumstances from a teaching job. Has Granada ever done a review?

And since when was Gary Glitter a BBC employee?

Seems like your hatred of the BBC is clouding judgement.

@anon 12:06
In addition to SteveB's post: -
Far from diverting attention away, the article above stays with the subject.
I take it that you have evidence that all of those you named are most certainly sex offenders and that you've contacted the police and made statements to them.
Although dead men cannot sue, defamation of character can have a detrimental financial effect on royalties etc., that continue to be paid after the original copyright owner has died. Who knows, there may be a firm of lawyers looking at your comments?

All those names and more were put on David Ickes forum several years ago.
Were lawyers casing the joint?

I believe some officials were.


and his one pair of kecks which he washed by hand.

Some informative issues in that blog.

Mi5 would no way have fiddled Blair's dossier.
In fact, Mi5 knew that the intelligence that Bush had persistently pushed as being fact in WMD's was wrong.
They, unfortunately don't have the remit to stop any proposals for war. Neither do they have remit over anything the USA do.
This is why it makes it difficult to prosecute Blair for war crimes because the other puppet master was pulling the strings.

Mi5 were vetting staff but yet again, they can't initiate investigations without complaints via outside agencies such as police.
Intelligence were made aware of what hacks were doing as Rimmington was tipped off.

I and no doubt many in the general tax paying public would be very disappointed to hear that this information wasn't taken seriously or acted upon.
Supposing they have took note and kept watchful eye. They've probably got enough ammo to blast Murdoch and his accolades in to the next galaxy and exile him.

He has come to the UK and stirred up trouble and intimidated politicians and I admit many people express distaste for some in politics but that vermin should have been grateful for being allowed to reside here and set up shop.