The Daily Mail has added another instalment to the Tory Party’s bullying scandal this week as it has tried its best to smear the memory of Elliott Johnson, and the name of his family. Meanwhile, out there on the right, one of Young Britons’ Foundation head man Donal Blaney’s bosom buddies has used the Mail story to apply a particularly nasty smear to the Johnson family. The dead activist’s friends are not at all happy at this development.

The YBF gathering in late 2014 where Mark Clarke was given the platform - and his Golden Dolphin award. Elliott Johnson can be seen at front left

“Tatler Tory victim rowed with his parents about being gay: Activist whose suicide sparked bullying scandal had battled depression for years, police report finds” reads the headline of Andrew Pierce’s article. Pierce’s name is on the by-line for two reasons: he is a loyal Tory, and always keen to deflect blame away from the party, and the Mail will claim it cannot be homophobic because the report was written by a gay man.

The Mail claims to have seen the Police report prepared for the coroner’s inquest, but what they saw does not back up the headline: Elliott Johnson “had found it difficult that his parents struggled to accept his homosexuality … Mr Johnson said his parents Ray and Alison, from Wisbech in Cambridgeshire, had struggled with his sexuality”. That is not the same as claiming he “rowed with his parents”.

Moreover, as Johnson made his fateful last train journey, his mother tried to phone him, which suggests there was regular contact, and parental concern for his wellbeing. But this has not stopped Mike Rouse, a longstanding friend of Donal Blaney, from using the article to smear Johnson’s memory, and indeed his family. His Facebook posting is included in this post and I quote from it in full below.

“This article in the Daily Mail makes for seriously uncomfortable reading, but I think it’s important to share with my activist friends who have been close to this and following this for some time [link to Pierce’s article included]. Personally, I am left quite angered by what I’ve read by the way Elliott’s parents appear to have treated him over 5 or so years after he came out as gay to them. They should have found a way to support and love their son regardless of his sexuality”. And there is more - much more. 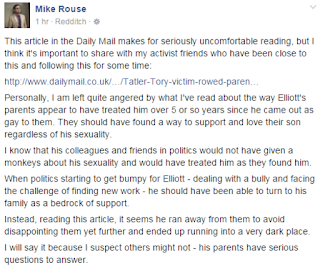 “I know that his colleagues and friends in politics would not have given a monkeys about his sexuality and would have treated him as they found him … When politics started to get bumpy for Elliott - dealing with a bully and facing the challenge of finding new work - he should have been able to turn to his family as a bedrock of support”. And more.

“Instead, reading this article it seems he ran away from them to avoid disappointing them yet further and ended up running into a very dark place … I will say it because I suspect others might not - his parents have serious questions to answer”.

I have never met Mike Rouse, and hope that I never do. Pierce’s article, despite the slant applied towards smearing the Johnson family, does not so much as suggest that Elliott Johnson “ran away” from anything. Indeed, a Guardian article from last November includes a photo of Johnson with his clearly proud parents at his graduation from Nottingham University. Elliott Johnson met his parents just two days before his death.

Moreover, Pierce’s article concedes “The police report is critical of the Conservative Party, saying: ‘The death of Elliott has highlighted a number of potential administrative failures and potential criminal matters taking place at Conservative Road Trip events’ … A week after the first row with [Mark] Clarke, Mr Johnson was left ‘heartbroken’ when he was sacked by CWF. The police report says he began researching suicide methods on his computer the same day”. It’s blindingly obvious what put Johnson in that “very dark place”.

Why should Rouse’s clumsy and amateurish smear matter? Well, he’s not just any Blaney pal: Mike Rouse was, as Iain Dale noted back in 2007, one of the team at short-lived internet TV venture 18 Doughty Street (Blaney was a regular presence in the broadcasts). He has recently spoken, as a friend, in defence of Blaney. It is clear that his intervention is an indication of how the YBF’s fightback will look - and how dirty it will be.

Indeed, such is the revulsion among Elliott Johnson’s friends that one has given Zelo Street a statement on condition of anonymity. That friend has forthright opinions on the behaviour of Rouse, Blaney, Clarke and their pals. Their thoughts are given in full.

“This disgusting smear from Mike Rouse is typical of what we have come to expect from members of the Young Britons Foundation (YBF), an organisation which trained and lauded Mark Clarke.

An inconvenient truth for Mike Rouse is that it was his friend Donal Blaney who trained Mark Clarke and gave him a platform at Conservative Way Forward (CWF) events.

It was also Donal Blaney who made Elliott redundant from his job at CWF after just two months. Because of Blaney’s decision, Elliott found himself stranded in London with rent to pay and no income, which is no way to treat a vulnerable young man.

Elliott was impressionable. he idolised Blaney and Clarke, who presented themselves to him as respected Tory grandees with powerful connections. What he did not know is that Blaney and Clarke are so very similar in so many ways.

Both Blaney and Clarke crave control and are notorious for aggressive conduct and both are considered an embarrassment to the Conservative movement.

Both Blaney and Clarke have obsessive interest in youth politics despite reaching the age of 40.

Donal Blaney’s biggest and most famous life achievement is creating the monster that is Mark Clarke.

Knowing this, it is a mystery why he is still allowed to shame the name of CWF and Lady Thatcher with his poisonous brand of politics”.

I would add to that the reminder to all those seeking to exonerate the YBF and its hangers-on that investigations continue on a number of fronts. Clearly there is significant resentment at Rouse’s intervention, which, piled on top of that over the group’s previous behaviour and tactics, is making for a combustible mix.

Those trying to spin this story away would be better served waiting for the Inquest and other inquiries to take place, before starting to shift blame and smear. There is a lot more to come on this story - and the YBF crowd are not going to stop it.
Posted by Tim Fenton at 15:00

Thank you for this article. That Facebook post is quite possibly one of the most hateful, disgraceful things I have ever read. That someone would do something so foul to a grieving family - well, it defies description, frankly.

"Both Blaney and Clarke have obsessive interest in youth politics despite reaching the age of 40."-- that's a slightly rum observation. Since youth organisations are usually run by seniors, is your source insinuating that their interest is any way, er, unusual?

Tories and New Labour always hate those they wrong or smear.

It's as much a part of their DNA as cowardice.

The family can expect more of this. Much more.

Whatever it is, it looks very unhealthy.

Is there a time we may see Staines and his friends came out of the closet?

Someone clearly isn't man enough to stand up for his beliefs.

Having watched Andre Walker's interview today he just doesn't seem credible. I have also been reading this http://www.dailymail.co.uk/news/article-3328717/The-sex-tape-shames-Conservative-party-Tatler-Tory-used-vile-revenge-porn-humiliate-political-opponent.html

'Sources say the female was ‘plied with drink’ at the Commons reception before she and Walker went to a party at the Fulham home of another Tory aide, Will Hanley, who has a Commons pass issued by Conservative MP Nigel Adams.
According to one account, the woman was taken into a room and given cocaine, which she proceeded to snort. This newspaper has been told a camera had been placed on a table in an attempt to film the woman taking drugs.'