For the press establishment, this week’s General Election is not merely about Tories versus Labour, right versus left, austerity versus spending, or indeed Britain versus Europe. It is a contest offering the supreme binary choice: Labour forming a Government would mean Part 2 of the Leveson Inquiry, and Section 40 of the Crime and Courts Act. Tory victory would consign both to the dustbin of history. 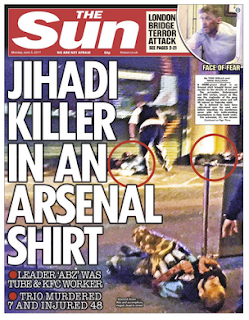 That means a win for The Blue Team would give the press carte blanche to carry on misbehaving, defaming the little people, and generally lording it over anyone incurring their displeasure. This is the kind of suggestion to which those who scrabble around the dunghill that is Grubstreet are highly susceptible. For this reason, most papers are piling in behind Theresa May, baying and screaming for a Tory victory.

It is with this backdrop that the Murdoch Sun has tried - subtly at first, but this morning throwing caution to the winds - to once more link Labour leader Jeremy Corbyn and terrorism. They did it with the Manchester bombing, and after last Saturday’s London Bridge attack, the goons are at it once more. This time they have also decided it is worth alienating another group of football supporters in order to hit their target.

You think I jest? Consider yesterday’s front page: “JIHADI KILLER IN AN ARSENAL SHIRT”. At this stage, Khuram Butt had not yet been named, so why bang on about his wearing an Arsenal shirt? It didn’t help the paper’s standing with a significant part of North London, as Gunners fans expressed their disgust at the guilt-by-association line. But the real target became clearer with today’s edition. 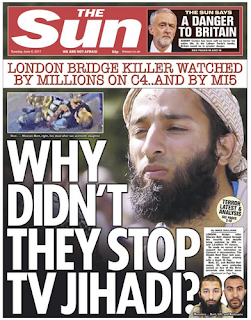 “London Bridge Killer Watched By Millions On C4 … And MI5 … WHY DIDN’T THEY STOP TV JIHADI?” screams the front page headline. Yes, the attack was mainly Channel 4’s fault, with a side order of MI5 mishap, but look also at what has been slipped into the top corner - a photo of Corbyn, and the caption “The Sun Says … A DANGER TO BRITAIN”. Corbyn supports Arsenal. And now he’s on the same page as a murderer.

Perhaps this is mere coincidence? Think again: that Sun Says dispenses the usual abusive “If you want the next leaders of this country to keep us safe, you can't rely on Jeremy Corbyn and his would-be Marxist government”, and defames predictably with “they supported the wicked IRA as it tortured and assassinated our soldiers and police and massacred men, women and children”, but then makes the deliberate link.

Of the Labour leadership, the Murdoch goons claim “this Labour trio harboured similar sympathies for the sort of jihadist maniacs now bringing carnage to London and Manchester and sizing up their next target”. The Sun is telling its readers that Jeremy Corbyn sympathises with those committing acts of terror. It is blaming the London Bridge attacks on the Labour leadership. It’s a nailed-on smear of the lowest kind.

That is the level of desperation to which our free and fearless press has sunk. Because the price of failure is too awful for the Murdoch press to contemplate.
Posted by Tim Fenton at 10:45

An Arsenal shirt? Spurs, I could understand - but Arsenal? What on earth is this country coming to??!!!*

*NB: Satire. - after all the Scum also claimed he worked at KFC, but there's obviously no Corbyn angle to exploit.

You mean that in addition to being an MP & leader of the Labour Party, Corbyn was also PM & Home Sec with responsibility for such matters as our security over the past 7 years? What a busy chap he must be.

Translation: Help! Corbyn wants to crucify the press for all the bad shit we've done.

No mention of Thezza having cut 20,000 police jobs I imagine.

Wouldn't it be nice if the people of London had the courage and determination to follow the example of the people of Liverpool and boycott Murdoch and his glove puppets?

Entirely unlikely of course, but a democrat can dream.