After Dubya Bush went after Afghanistan and Iraq in supposed retaliation for the September 11, 2001 attacks on the United States, despite fifteen of those involved being citizens of Saudi Arabia, Jon Stewart memorably chided the then President at the thought that the bombing and invasions might have been aimed at the wrong target. “What happened, Mr President … did you miss?” asked the then Daily Show host. 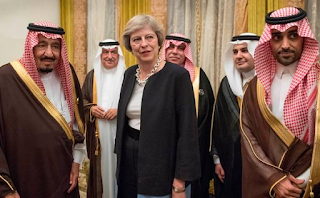 Letting the Saudis get away with it is one thing; cosying up to them is another. And letting the Wahhabist régime in Riyadh interfere in British domestic and foreign policy is taking matters too far. Yet the Tories, with Theresa May in the vanguard, have been complicit in all three. That The Blue Team is close to the Saudis is, of course, part of recent history, typified by the Thatcher Government sealing the al-Yamamah arms deals.

Britain has been exporting lethal weaponry to the Saudis for decades, and we too looked the other way as it became clear that most of the 9/11 hijackers were from that country. But the scale of corruption, and its apparent influence on Government decision making, that has been unearthed recently should worry anyone concerned at the terrorist threat - especially as the Saudis appear to have threatened more of it.

As the Guardian reported in 2008, “Saudi Arabia's rulers threatened to make it easier for terrorists to attack London unless corruption investigations into their arms deals were halted, according to court documents … Previously secret files describe how investigators were told they faced ‘another 7/7’ and the loss of ‘British lives on British streets’ if they pressed on with … inquiries and the Saudis carried out their threat to cut off intelligence”.

That is nailed on interference in our internal affairs. Today the Guardian is back on the subject: “Jeremy Corbyn and Tim Farron have challenged Theresa May over a long-delayed inquiry into foreign funding and support of jihadi groups in the UK, after the Home Office suggested the investigation may not be published … The inquiry into revenue streams for extremist groups was commissioned by David Cameron when he was prime minister and is thought to focus on Saudi Arabia”. And it gets worse.

The Intercept suggests a good reason for the Tories’ inability to say boo to the Saudis: “Conservative Government officials and members of Parliament were lavished with money by the oil-rich Saudi government with gifts, travel expenses, and consulting fees”. Lee Fang’s article delves into the specifics. And it makes for revealing reading.

“Philip Hammond, now the Chancellor of the Exchequer who has come under fire for defending a mass execution in Saudi Arabia that included a nonviolent government critic, accepted a watch from the Saudi ambassador worth £1,950 ($2,514) … Tory MP Charlotte Leslie … received a food basket from the Saudi Embassy with an estimated value of £500 ($644) … The Saudi Arabian government has also picked up the tab for four expense-paid junkets taken by Tory lawmakers to visit the kingdom since the Yemen war began”.

There was more: “Tory Rehman Chishti, one of the participants in a Saudi junket last year, was also paid £2,000 ($2,579) per month as an adviser to the King Faisal Center for Research and Islamic Studies, a state-backed think tank in Saudi Arabia”.

By cosying up to the Saudis, Theresa May is the terrorists’ friend. That’s not good enough.
Posted by Tim Fenton at 13:07

You may want to have a look at Daniel Kawczynski (Tory MP for Shrewsbury) and his record with the Saudi's.

He isn't known locally as the Honourable member for Riyadh for no reason.

Mark my words: This woman is an unprincipled, opportunist, lying hypocrite, malevolent even by tory standards. If she is returned to office, the damage she will front will be irreparable for the lifetime of anybody of voting age.

She and the party she fronts are a clear and present danger to society, fairness, decency and democracy. She is an autocued, cold threat to civilised living. An appalling woman.

Back during the cash for questions scandal, an acquaintance of mine expressed surprised over how little it took to buy a British politician.

And don't forget who blocked the inquiry into corruption and sleaze in the Al Yamamah deal for sale of weapons of mass destruction.

Yes, it was New Labour's Tony "50k a lecture" Blair. The man who ordered five separate military actions - more than any other Brit PM.