The right-leaning part of the Fourth Estate is, for once, very much on the back foot as it tries to comprehend not only the aftermath of the General Election, but also the craven response of the Government to the Grenfell Tower fire. Theresa May’s popularity has plummeted as Jeremy Corbyn’s has risen. The press response is all too predictable: it has to be the left’s fault. And so the smear machine has swung into action. 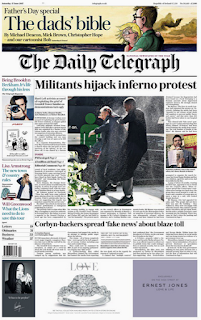 Signalling the demonisation of the left on its front page is the increasingly desperate and downmarket Telegraph, howling “Militants hijack inferno protest” before ensuring readers know “Hard-Left activists accused of exploiting the grief of Grenfell Tower families as demonstrations turn ugly”. And for good measure, there is the bonus smear “Corbyn-backers spread ‘fake news’ about death toll”.

Over at the Mail, yesterday’s plainly batshit suggestion that the dastardly EU was somehow behind the blaze - not an easy one to stand up, as countries likes Germany, the Czech Republic and Poland have banned the use of the kind of cladding used in the Grenfell Tower refurbishment - has given way to falling in line with the lefty-bashing, with a thundering Daily Mail Comment stoking up the red scare paranoia.

“Barely had the body count begun - and it seems, tragically, that it will run into scores - than hard-Left supporters of Jeremy Corbyn were spinning a narrative about the fire, blaming divisions of wealth, profiteering and (inevitably) ‘Tory cuts’” sneers the authentic voice of the Vagina Monologue, going on to tell “the Left played an unseemly game of competitive compassion (‘if Theresa May cared as much as Mr Corbyn, she would have talked to victims, not just emergency services’)”.

Then come the downright lies: “budget cuts by the Tory council had nothing to do with it … For just £200,000, life-saving sprinklers could have been installed. Instead, priority seems to have been given to meeting EU targets for energy conservation … Equally groundless are the Left’s attempts to blame cuts in London’s fire service”. Wrong, wrong, wrong.

And not to be left out, the Murdoch goons at the Sun have brought forth another fresh and steaming pile of weapons grade bullpucky from the odious flannelled fool Master Harry Cole, claiming “HARD-LEFT activists were blasted for “hijacking” the genuine outrage over the Grenfell tragedy … Supporters of Jeremy Corbyn fan group Momentum were spotted during the invasion of Kensington and Chelsea Town Hall”. Do go on.

“One eyewitness slammed the Westminster protest as ‘a bunch of white middle class students, who were handed their signs’ … They went on: ‘These kids had nothing to do with Grenfell, it was just the usual suspects and the students turning up’”. Who was that eyewitness? Most likely it was the fat twat Cole himself.

The Sun even roped in alleged libertarian Brendan O’Neill to whine “In the 20 years I’ve been writing about politics, I can’t remember a tragedy being milked for party-political gain as quickly and cynically as this … What has happened to the Left that it can engage in such low political grandstanding even before the bodies have been counted?”

As if he gives a shit beyond scoring his paycheque. It’s just another example of the Tory-backing press desperately trying to blame Grenfell on the left. And it is going nowhere.
Posted by Tim Fenton at 10:16

So many echoes of the immediate blame shifting and obfuscation we witnessed at Hillsborough. Given a free rein the Tories and their press backers would again have us wait decades for the truth to finally emerge.

Tim Fenton wrote:
The Sun even roped in alleged libertarian Brendan O’Neill to whine “In the 20 years I’ve been writing about politics, I can’t remember a tragedy being milked for party-political gain as quickly and cynically as this … What has happened to the Left that it can engage in such low political grandstanding even before the bodies have been counted?”

Perhaps because we are fed up with the lies, obfuscation, smears and evasion of the powers that be, politicians, police, tory press,etc that have followed previous disasters, and this time the people affected dont want this one to be shunted into the long grass. An unfortunate metaphor, but this time people have to strike whilst the iron is hot.

O'Neill might like to consider that its very often wrong-headed political decisions that lead to disasters like Grenfell so an appropriate response by those affected is to reach for politics to fight those decisions and the politicians who, usually for financial gain of themselves and their support base, make them. Lets not forget how many Tory MPs who rejected more stringent safety measures/conditions in rented accommodation are themselves private landlords.

I thought it was the Express who had tried to blame the EU?

(Not that that would have stopped the Über-cunt from doing it as well, of course).

Parroted by Conservative Home who would never dream of using a tragedy for political gain would they? /sarc/ /irony/

And yet still no acknowledgement from Brendan O'Neil that he is funded by the shadowy and secretive far right-wing Australian "think tank" the IPA. The IPA's stated aims are to completely dismantle the government funded ABC broadcaster ( Murdoch is an IPA sponsor), abolish all forms of social security, pensions etc, ban unions and all benefits gained via unions over the decades, abolish all banking controls and "cut red tape" building regulations, ban the minimum wage and enforce minimum hour "contracts". the sell off of every single government funded entity to private business and so on.

O'Neill is a fraud and it's a disgrace to even intimate he is a "Libertarian" when he surges between a Stalinist oppressor of free speech whilst hypocritically claiming to advocate for it and is more akin to the worst of the far right Nazis.

He is so loathed in Australia where he frequently visits to appear at News Corp shindigs he has finally been dropped from the popular ABC "Q&A" current affairs program as boorish and a buffoon who no-one, whether they are from the left or right, can stand or even understand and on the basis that any IPA representative is a blatant hypocrite by appearing on an entity which they want dissolved.

And tabloids like The Australian who give O'Neill a regular column wonder why they are gradually going down the tube.