Michael Fallon Is Full Of Crap

As the Tories face up to Parliamentary life propped up by the opportunism of the DUP and their Billion Pound Bung, they are realising that it is Jeremy Corbyn and Labour who have the momentum - and the opinion poll lead. There is a fast diminishing list of topics where The Blue Team can claim an advantage. One of those topics, though, is a sure fire winner when it comes to Labour bashing, and that is defence. 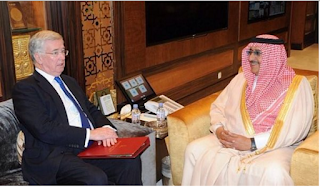 Someone he WON'T be going to war with

There’s nothing to get the Tory base fired up quite like a bit of sabre-rattling, a little imperial braggadocio. Who won the war, anyway? So it was that Michael Fallon, defence secretary and dead cat slinger supreme, responded to the latest cyber attack news by asserting that a future such attack might be sufficient pretext for Britain to declare war.

This totally fictitious scenario was swallowed whole by the more susceptible part of our free and fearless press, which to no surprise at all has included the Murdoch goons at the Super Soaraway Currant Bun. Here, their alleged “Westminster Correspondent”, the odious flannelled fool Master Harry Cole, has told readers “Britain may go to war with foreign states attempting cyber attack on UK, Defence Secretary warns … Sir Michael Fallon said the recent cyber attack on Westminster was a reminder of the dangers”.

Of course it might, er, not. But do go on. “FOREIGN state hackers could face a declaration of war from Britain if they are found to have targeted us again, the Defence Secretary warned tonight … The chilling threat came as the Tory hawk revealed foreign enemy states are launching two ‘high level cyber attacks’ on Britain every single day”. So with whom was Fallon prepared to go to war - presumably without anyone else’s assistance?

“In a major speech be blasted ‘aggressor states like Russia, working overtime to disrupt and discolour our democracy’ who launch around 60 attacks on Britain’s government IT, infrastructure and businesses every month”. Ho yus, Fallon says we’d declare war on the gangster régime of Vladimir Vladimirovitch Putin. Like heck we would.

Despite this “story” being yet another steaming and not particularly fresh pile of bullpucky, the BBC has reported on it, and so, to its further shame, has the increasingly desperate and downmarket Telegraph, claiming preposterously “Britain prepared to use air strikes or send in troops as retaliation against future cyber attack”.

So they swallowed the Kool-Aid as well, then. And despite Master Cole burbling hopefully “Sir Michael added that a cyber attack could fall foul of NATO’s Article V covering mutual defence, which states that an attack on one member state is an attack on all”, it is telling that none of the Ron Hopeful copy on this subject has managed to get confirmation from anyone in NATO that they would go along with this idea.

The notion of starting a shooting war - especially with another nuclear-armed power, like Russia - over a cyber attack is bunk. It takes a combination of credulousness and idiocy to allow oneself to be fed this drivel and not question its credibility.

Meanwhile, Michael Fallon will have to get himself a better dead cat. Because the one he’s slinging right now is falling apart.
Posted by Tim Fenton at 16:22

You think the Maybot is bad? Let me tell you the tedious accordion-breathing drone has fuck all on the Fallonbot.

But if it's warmongers you want MichaelHowardbot has the kecks off the lot of them......He threatened war with Spain after the Brexit vote. The thick twat.

War and inflicted economic misery are probably the only things to give them an orgasm.

You can imagine the thinking. 'Er, why aren't we popular any more, Mr Crosby? Oh, he's fucked off. Well, Theresa, when I'm baffled I always ask myself: what would Maggie do? Now I remember that Maggie was very unpopular in 1981. What did she do? Start a war, of course. Problem solved. Now where do these hackers live ......?'

The desperation is laughable.

With the Russians/Mercers/Kochs/Murdoch apparently aiding Trumpleton by various means (cyber warfare, media deza and voter suppression) and MayBot, having appointed old Atlantic Bridge people as Ministers, and holding hands with Trumpleton who exactly would any cyber warfare parties be attacking in the UK?

Or anyone just to cause chaos and confusion in the UK? Which to be fair doesn't seem to be too difficult at present.

Leading cyber expert to Senate Intelligence C'ttee: Russian active measures in Brexit "should be examined". What is UK intel doing? Anyone?"

Is anyone else even asking questions apart from those asked about the dodgy financing of the "leave" cmpaign?