So the latest glib soundbite from Theresa May is to tell anyone not yet asleep that “Enough is Enough”. There is, it seems, no respite from variations on the “Brexit means Brexit” theme, and rather more than the 24 favoured by Niccolò Paganini and Sergei Rachmaninov. Soloists and orchestras would not have beaten a path to the door of whichever composer invented such tedious fayre. 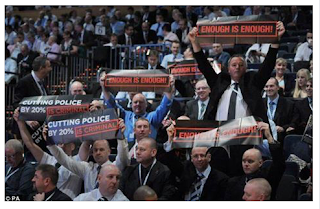 Theresa May gets a less than rapturous reception

And there is a problem with “Enough is Enough”. It’s not even remotely original, and nor is its previous political incarnation particularly good news for the PM. Worse, that previous incarnation was used against her. Yet worse, it was used by the Police as a response to her continued cuts in their numbers. The BBC’s James Landale reported on the less than favourable reception Theresa May received at the 2012 Police Federation conference.

Here’s what she had to say: “I've told the federation conference as it is - which is that as a government we do have to deal with the deficit, and that means that policing has to take its share of the cuts … It is necessary for us to look at this, for the good of policing for the future, and looking at how we can ensure police officers are able to do the job they and the public want them to do”. So the usual empty platitudes, then.

This was not well received. The Beeb’s Danny Shaw told “that the home secretary had apparently been reluctant to be photographed or filmed directly in front of a sign on stage saying ’20% cuts are criminal’”. It got worse: “Some officers held up placards reading ‘enough is enough’ as Mrs May came on stage and she was heckled during the question and answer session that followed”. Zelo Street has the photo to prove it.

And the Guardian report looked even worse for the then Home Secretary: “May's 25-minute set-piece speech to the 1,200 strong Police Federation conference in Bournemouth ended in complete silence … But she had to sit stony-faced through huge cheers and applause when one officer told her she was ‘a disgrace’ and was no longer trusted by the police, and she was heckled when she promised not to privatise the police. ‘You already are,’ shouted one officer”. Sounds like a less than fun day out.

It wasn’t exactly fun for the cops, either: “The home secretary insisted that the police funding cuts were ‘affordable and manageable’ and directly answered accusations that policing had been singled out to take the pain. ‘Let's stop pretending the police are being picked on,’ she told them. ‘Every part of the public sector is having to take its share of the pain’”. Three years later, she was accusing them of “crying wolf”.

And using that phrase may have sounded good when Ms May was being briefed and coached, but the eventual result will be to alienate the Police yet more. What a contrast with Margaret Thatcher, for whom keeping the cops on-side was key. No expense was spared in keeping them sweet. But now … well, “Enough is Enough”.

Another brilliant wheeze from the Tory top team. And another damp squib.
Posted by Tim Fenton at 16:24

The woman has as much warm human spontaneity as a snake lost in the Antarctic.

Next time she delivers a speech watch her reading it like a failed second feature film actor. It's all eerily reminiscent of the moronic Bush2 over there in Gunland.

The same goes for other tory arseheads like Jeremy Hunt, Michael Falcon and Philip Hammond - all of them noticeable only by their near-absence.

Add into that the soap salesman/woman who writes that shite for her and you have the makings of a very large national disaster. But perhaps it's no more than we deserve. Any country that tolerates the governmental insanity of the last generation needs to take a good long hard look at what it's doing to itself. May and her gang of liars and hypocrites are merely symptomatic.

Thatcher HAD to "keep the cops on side".

Who else was going to inflict brutality on the mining communities, subvert the law, lie about what they were ordered to do at Hillsborough, frame innocent Irish citizens, and assault and injure democratic protesters?

Did the police REALLY believe they'd escape the same betrayal as the Nottinghamshire Miners? Did they REALLY believe they would be exempt from typical tory thievery?......If so, they fit the satirical profile of Plod with a one inch deep forehead.

Sooner or later tory theft is visited on everyone. Even in the deluded south east. It's just a matter of time.