The right-leaning press does not like Channel 4 News. The broadcaster’s flagship offering is a regular target for disaffected editors and pundits who see its presenters’ independence and commitment to speak truth to power as too radical and - by their sad definition of how the world is ordered - left-wing. And a special place in their pantheon of hatred is reserved for the programme’s main presenter Jon Snow. Snow is unpredictable, probing, persistent, and utterly devoid of pretence. There will be no deference to anyone, whether Government ministers, businessmen, lobbyists, hacks, pundits, lawyers, union leaders or anyone otherwise appealing to authority. He was also at last weekend’s Glastonbury Festival, and his visit is now being used in a cheap and opportunist attempt to get Channel 4 to dispense with his services.

This singularly pathetic slice of Ron Hopeful behaviour has, to no surprise at all, emerged from the perpetually thirsty Paul Staines and his rabble at the Guido Fawkes blog, where apprentice sandwich monitor, oops, sorry, senior reporter Ross Kempsell has told readers “There’s Snow Such Thing As Impartiality” and based his “story” on a single source, which, to be fair, is one more source than much of the Fawkes oeuvre. 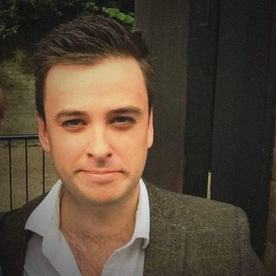 Ross Kempsell - claims to be a journalist. No, don't laugh

“Boss place that Glasto. Having a dance with Jon Snow and hearing him shout fuck the Tories is what dream[s] are made of” it reads. This is enough for Kempsell to declare Snow guilty as charged: “A Glasto reveller recounts their weekend with loud-socked Channel 4 News anchor Jon Snow. No one ever thought you were neutral, Jon”.

This is then followed by dismissing Snow’s own recollection: “Jon Snow gets in touch … ‘After a day at Glastonbury I can honestly say I have no recollection of what was chanted, sung or who I took over 1000 selfies with’ … Classic non-denial. He said it”. That’s right, a bunch of habitual liars who inhabit a borderline Fake News outfit call “liar” on the main presenter of TV’s most trusted evening news bulletin.

Kempsell is full enough of himself to then pretend that his phoney story is gathering momentum, which it is not. Under the claim “Story snowballing (geddit?!?)” he offers “Conservative MP Andrew Bridgen calls for Snow’s resignation … ‘I think it’s time Channel 4 told Jon Snow where to go’”. Er, Andrew Bridgen? The same Andrew Bridgen who’s always mithering about the BBC not presenting the news as he wants to hear it?

The same Andrew Bridgen who’s always there when the broadcasters need a rent-a-quote Europhobe? The Andrew Bridgen who claimed MPs were “getting poorer”? Who has slagged off the HS2 project from the word go, despite getting £2 million for his house in compensation from, er, HS2? And Channel 4 should do his bidding?

Ross Kempsell’s attack on Jon Snow and Channel 4 is going nowhere. Kempsell is labouring under the misapprehension that just because he managed to eavesdrop on Paul Mason in a Liverpool eatery, it somehow makes him a journalist. It does not.

The Fawkes blog already has Billy Liar on its books. Now it’s got Walter Mitty as well.
Posted by Tim Fenton at 16:27

I don’t hate Snow. I just think of him as a London-centric knob head who thinks wearing stupid ties and socks somehow denotes “character” or, worse, anti-establishment ethics. In fact he’s neither of these, let alone “...utterly devoid of pretence.” Anybody who kids himself about the latter needs only to see him fawning in the company of some “artist” who’s just deposited a pile of rusty reinforcing rods on the floor of some deluded “art gallery” somewhere in, guess where, London.

Like the rest of Channel 4 News he has as much idea of this country as anyone else who chooses to live and work inside the corrupt London mainstream media bubble of a few hundred people. Ultimately he’s no different to the rest of them despite the odd excursion into “controversy”. Just a few months ago he was in full delusion mode when he described London as a “blessed place”. But that was before the place exploded into yet more horror. And that was right on his own doorstep. Needless to say when he and the rest of the C4 crew venture outside the M25 ghetto he might as well be in a foreign country. He had a face like a smacked arse when the general election result was finalised – especially because he spent the previous weeks sticking a boot in the Labour Party a la the Daily Mail. Which is what you’d expect from someone who disappears up his own arse every day in suburban Berkshire.

In a wider context, C4 News, which he fronts, is largely a thoroughgoing disgrace to international reporting. This is specially true when the “correspondents” are the appalling far right propagandists Hilsum, Miller and Rugman, none of whom could be trusted to hold a door open. Rugman’s bullshit about Syria tonight was typical: the first stage of promoting a land division of that country.

The only time C4 News has done something remotely “radical” was when the usually (but not always) admirable Alex Thomson (the only saving grace they have) door-stepped the Murdoch coward Mackenzie.

The real tragedy of British broadcast news is that a tenth rate load of such crap should be considered “radical” by some dupes. As for Snow, he might consider that some of us think it takes a great deal more than pissing in the filing cabinets of his university when he was a student. Nor does anybody take kindly to his preposterous bullshit to Anna Ford that, “The provinces are the potting sheds of London”. In fact Snow and the C4 News crew are nothing more than a tiny group of out-of-date self-satisfied prigs who too often betray the truth in favour of what De Pear called “The Jon Snow Show”. Which says it all about the whole phoney charade.

Going off on a tangent here, but IIRC, didn't Bridgen stand to make even more from flogging his house as part of his divorce settlement until HS2 devalued it? Hence, possibly, his embitterment.

anonymous and anonymous agree
well that must be true then...

Having seen Snow attack and ask better questions of those on all sides of the party political divide I feel reassured watching him. It's that thing of knowing that he won't be like those sad know nothings at Guido who really couldn't be trusted to use scissors, even anonymously.

Well done. You have learned to love Big Brother and his "reassurances".

For what it's worth, the Fawkes mob is a thousand times worse than Snow. But so what?

The point is, Snow is typical of what passes for "liberalism" in this country. The kind of "liberalism" that had, for example, Clegg and Cable betray students to a lifetime debt of tuition fees (read: ripoff scam), all for a taste of power. A taste, incidentally, that had Clegg caught on camera telling Cameron they had "...to find some differences between us". Or that had Snow giggling over, nudge nudge, the bit of a lad that was the mafiosi Berlusconi. Some of us, you see, have reliable memories.

The only reassurance you can gain is that there won't be any change worth the name once Snow has gone the way of his chum Jeremy "One nation tory" Paxman. C4 News will remain a pantomime of happenings, a parody of worthwhile reporting fronted by a highly paid dilletante.

Meanwhile, the Fawkes crew will still be the gang of corrupt far right gobshites they've always been.

But by all means stay "reassured" if it gives you comfort. However fragile.