Sun Slags Off Its Own Local

Hacks and pundits may no longer indulge in the long drinking sessions that prompted Private Eye magazine to create the fictional journo Lunchtime O’Booze, but they are still partial to the odd scoop at lunch or after work. And for the Murdoch goons at the Super Soaraway Currant Bun, that usually means local pubs and bars around the Borough Market area - which brings us to a little bar called the Rake. 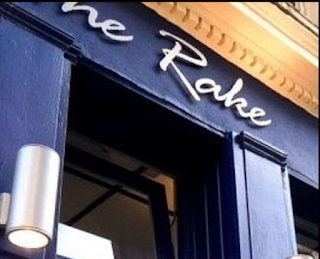 The Rake is tucked away at the back of Borough Market, and is busiest in the early evening. The inmates of the Baby Shard bunker are among that clientele. But this little craft beer outlet, which offers a dazzling array of speciality beers, all of them decent, and boasts the prominent wording NO CRAP ON TAP above the bar, found itself in the news after the press discovered that one exotic craft keg offering was selling at £6.70 a half.

Our free and fearless press did not stop to ask why that might be, or to stop and think that your average pint at the Rake might cost rather less. “The Rake pub at London Bridge charges £13.40 for a pint of Cloudwater Double IPA beer - leaving drinkers in disbelief” screamed the idiotic Sun headline. The rest of the article wasn’t any better.

“A PUB is selling pints at a staggering £13.40 … The Rake charges that for its 8.2 per cent strength Cloudwater North West Double IPA beer … It has left drinkers spluttering in disbelief. Some Twitter users called it ‘ridiculously marked up’ and ‘hideously expensive’”. Yeah, right. Did the Sun hacks stop to think what made that beer so expensive, or indeed why, as they admitted, it sold out so quickly they were too late to sample it?

Cloudwater is one of the country’s highest regarded microbreweries. The beer the Sun is ranting about is heavily hopped and then dry hopped - and it takes longer to brew. Moreover, you would not buy a pint of it. As the Manchester Evening News discovered, a bar in that city which sells the same beer - when they can get hold of it - charges £6 a half - not much less than the Rake - and won’t sell you a pint.

A comparison of monumental idiocy

That doesn’t matter to the Sun, which has indulged in a crass “5 BARGAIN BEERS” comparison. This involves comparing the kinds of beers the Rake’s clientele - like their own hacks - would not go near, and which are served in a pub hundreds of miles from London, with speciality craft beers. We are not talking like with like here.

The average cost of a pint in London nowadays, sadly, is around £4.50. The Rake will sell you an average strength pint of cask beer - and it’ll be bloody good cask beer - for no more than £4. Think about that. Then go to Time Out or TripAdvisor and look at the long lines of glowing five star reviews. This is a deservedly very popular bar.

As for the Sun - all that rant will do is to show anyone who knows their beer that it’s not worth wasting their money on propping up a cheap and nasty red-top rag. Paradoxically, its hacks won’t stop heading over to the Rake after work, which shows what a total and absolute shower the paper’s senior editors and managers are.

You want to be knowledgeable about a subject, any subject? The Murdoch goons want you to know that you won’t get that knowledge from them. Don’t Buy The Sun.
Posted by Tim Fenton at 10:13

A pint of Bud Light? I'd rather attempt Steve Bannon's gymnastics routine.

Beer is, for the most part, absolute shite. And tastes like it. Only fish'n'chips Brits could think otherwise.

Which is why it is a suitable drink for Scum propagandists.

Its only use is as a drains scourer. Even then I'd flush the drains afterwards.

Anybody who quaffs that poison deserves all the rotting liver they get.

Proof again that it would be a good idea for print newspapers like the Sun to take the whole of August off. This 'story' demonstrates there really is no one about to actually report on anything worthwhile.

Great joy in Australia today as the giant US CBS TV network has snapped up the ailing local Ten TV network gazumping the Murdoch family right under their noses. Lachlan Murdoch (with his dad's money) owns a share in the network along with billionaire Gina Rinehart and have been fiercely lobbing the government to relax cross ownership rules to allow the Murdochs even more control of the local media and thus buy the Ten network outright. Alas the company has been snapped up under the noses and left the grovelling Ministers in Turnbull's government with egg on their faces.

I Imagine that the beer is more expensive because of its high alcohol content which will attract more duty.

If there's one thing I wouldn't feel "great joy" at, it's a Yank news network* buying out a local.

*This of course includes Murdoch and his brats.

DBC said...
I Imagine that the beer is more expensive because of its high alcohol content which will attract more duty.

To the best of my recollection, the four beers in the graphic are all well under 4%. Magners is a bit higher but I'm assuming duty is different on cider.

I imagine if you worked out price per unit of alcohol there wouldn't be a world of difference between beers in the same pub.