As the white supremacists have made their characteristically violent and intolerant presence felt in and around Charlottesville, VA this past weekend, some of the Alt-Right’s more brazen opportunists have been taking steps to distance themselves from those making the trouble, while blaming anyone else they can. One such has been Battersea bedroom dweller Paul Watson, who wasn’t in the area, honestly. 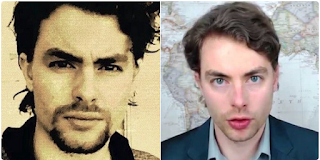 Of course, we know he wasn’t in the area - he was in the usual place south of the river, standing in front of his Very Important World Map and telling anyone bored enough to watch that it was nothing to do with him, if only they would all have heeded the warnings he claimed to have given, him and his pals weren’t racist or bigoted, honestly, and all the while whining at YouTube for banning some of his piss-poor content. 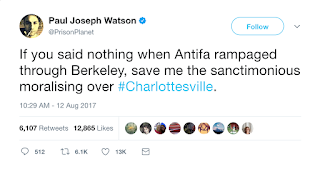 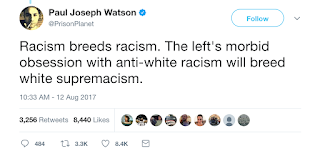 So what’s his excuse for the violence in Virginia? Simples. Look over there! “If you said nothing when Antifa rampaged through Berkeley, save me the sanctimonious moralising over #Charlottesville”. Rempage? I missed that one. But it’s all the left’s fault, apparently. “Racism breeds racism. The left's morbid obsession with anti-white racism will breed white supremacism”. No thanks, I don’t want to look over there. 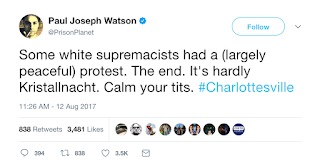 Have another go. “I vehemently oppose any movement based on racial identity politics, including this one. I defend their right to free speech. Simple”. Free speech was not what they were at. Still, he can pretend, and so he does. “Some white supremacists had a (largely peaceful) protest. The end. It's hardly Kristallnacht. Calm your tits”. Including a car peacefully driven at speed into a crowd, killing someone. Yeah, right. 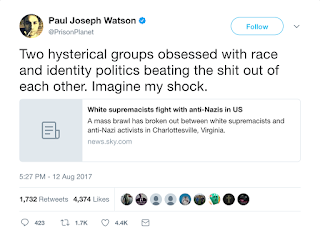 But he means it - it’s not about colour, honestly: “And if #BlackLivesMatter did the same I'd have the same reaction. Although they seem to have an issue with the ‘peaceful’ part”. Yeah, if only the black people would protest in a way he finds agreeable to Himself. Anyway, both sides were equally to blame: “Two hysterical groups obsessed with race and identity politics beating the shit out of each other. Imagine my shock”. 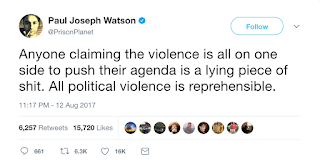 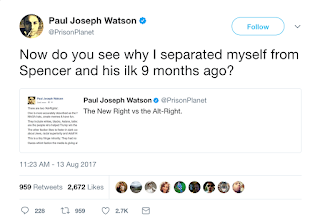 But you have to appreciate that he is not part of this neo-Nazi lot: “Now do you see why I separated myself from Spencer and his ilk 9 months ago?” He’s not one of the Hitler worshippers, right? That’s totally out of order. So perhaps he’d like to explain his association, and that of InfoWars, with Peter Imanuelsen, aka Peter Sweden, the Holocaust denying bigot actually from Northallerton. BUSTED.

Paul Watson and his InfoWars pals talk a good game. But they can’t wash off the taint of the far right that easily. They’re all guilty as sin. End of story.
Posted by Tim Fenton at 16:28

God almighty. With that kind of "logic" small wonder sane humanity considers the far right to be utter morons.

Yeah, stupid I know. But would holding a mirror up to them make them any more likely to recognise themselves? After all, there's none so blind as those who do not want to see......

@1. I couldn't have put it better myself. What a cowardly 'not me, guv', dishonest little c**t he is., but he's just another gobby fringer, desperate to carve a career in the alt right blogosphere. Which makes me wonder why Tim bothers with him. He's a sad little rub out.

I agree. These little obsessive self-publicists need someone to keep an eye on them and Searchlight/Hope Not Hate has done an admirable job for decades. But this little twat got a mention in the Observer today, for god's sake.
Just leave him to his solitary digital emissions, Tim, and occasionally send an online tissue.