Set a thief to catch a thief, or so the old saying goes: after seventeen men and one woman were yesterday convicted of rape, supplying drugs, and conspiracy to incite prostitution, the initial reaction of the press was uniformly positive, and as the men were all, at least nominally, followers of The Prophet, the next response from our free and fearless press was to crow that it was further evidence against all those Scary Muslims (tm). 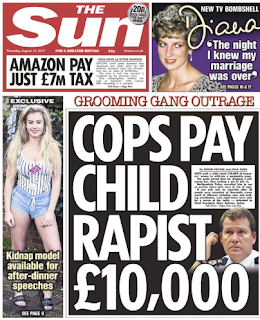 As the BBC reported, “Over the course of four trials, 20 young women gave evidence covering a period from 2011 to 2014 … These trials involved 26 defendants, who were mostly Asian, facing a total of more than 100 charges and 22 victims … Those prosecuted were from the Bangladeshi, Pakistani, Indian, Iraqi, Iranian and Turkish communities and mainly British-born, with most living in the West End of Newcastle”.

The sordid detail only needed to be hinted at: “The victims were at first flattered by the attention of the men who apparently befriended them, but were then lured to parties, known as ‘sessions’, by the promise of alcohol and drugs - often mephedrone (or M-Kat), Newcastle Crown Court heard … Bags of M-Kat were left on coffee tables for the girls to help themselves”. But then came the bit that is giving the press a problem. 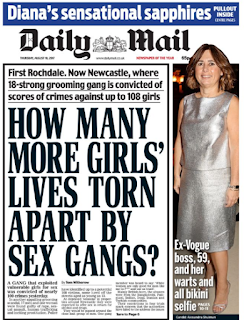 The Beeb again: “A police force paid a child rapist more than £10,000 for help during an investigation … It has now emerged that during the course of the inquiry the force paid the convicted rapist - known as XY as he cannot be named for legal reasons - to act as an informant”. This put the Murdoch Sun in a quandary.

On the one hand, the goons in the Baby Shard bunker were happy to tell readers “ONE of the men involved in a sex party ring where it was suspected under-age girls were fed drugs and abused once said: ‘All white women are good for one thing, for men like me to f*** and use as trash’ … The jury at Newcastle Crown Court heard Badrul Hussain made the extraordinary outburst to a ticket collector on the Tyne and Wear Metro”.

But on the other, “Earlier it was revealed, cops paid a convicted child rapist almost £10,000 to spy on the parties, a court heard … He was recruited despite being a sex offender who had drugged an under-age girl and invited another man to rape her after he had done so, a court heard”. What’s worse for the Sun is that XY cannot be named for legal reasons, as there’s nothing they like more than outing someone for fun. 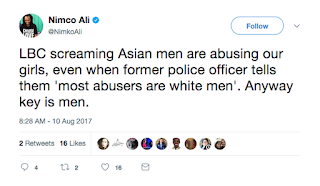 But they do want readers to know that, despite 18 people being convicted, which they are all in favour of, it’s an “outrage”. Meanwhile, the Dacre Doggies at the Mail are busy inventing numbers of victims - “up to 108” - while demanding to know how many more are affected by what it calls “sex gangs”. The fact that most abusers of young women, as Nimco Ali has pointed out, are white men, does not get a look-in.

And so continues the fuelling of the narrative that emboldens the far-right and their followers. But hey, ignorance helps sell papers, the press can always say it’s someone else’s fault, and their sham regulator IPSO will back them up. No change there, then.
Posted by Tim Fenton at 09:52

I'd be careful with this one, Tim.

The fact is too many of the IDENTIFIED so-called "grooming gangs" are from ethnic groups. We need to know the FULL NATIONAL EXTENT of grooming gangs before dismissing this important fact. If it is limited to, or dominated by, ethnic groups then it is important to ask why. Ignoring it won't solve the problem.

It's equally true most sexual abuse is committed by white men. This is probably true because of sheer demographics. But how much of it is in similar gangs and how much by warped individuals? How much of it is in the so-called "sex industry" of prostitution?

None of the above will excuse the usual far right institutional racism in some mainstream media and some police forces.

There are many questions to answer in this awful situation. They won't be resolved by burying one's head in the sand. If there is a cultural problem it needs to be identified and solved post haste. The reality has been ignored for far too long.