The Murdoch goons at the Super Soaraway Currant Bun have missed no opportunity to let their readers know that they believe leaving the EU is A Very Good Thing, and not just because it would be easier for their bosses to bully an isolated UK than getting their foot in the door in Brussels, oh no. To this end, the Sun has brought forth a whole raft of articles featuring allegedly leading economists - except they aren’t. 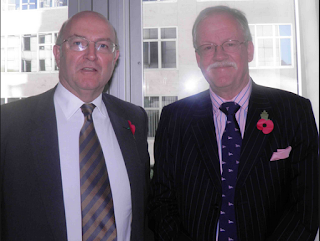 UKIP - Rogering the UK once again

The first to get bigged up was the appalling Patrick Minford, who championed the policies that saw unemployment go through the 3 million mark in the early 1980s and stay there for far too long afterwards. Minford also backed the Poll Tax. His claim that Britain would thrive outside the EU by unilaterally abolishing tariffs would bankrupt the country in short order, as would his talk of no longer having any manufacturing industry.

That did not stop the Murdoch mafiosi selling him to an unsuspecting public as if he were something akin to the Second Coming. Nor has it stopped them from introducing another quack economist, this time a man called Roger Bootle, who is clearly very important, as he wears a dark suit, and folds his arms in a very important manner.

“Britain will boom once free from the EU’s ‘destructive policies’, a top economist claims … Roger Bootle said in a report backed by 15 other experts that the EU is a ‘comparative economic failure’ hamstrung by ‘cack-handed’ decisions” declares the Sun, continuing “[he] authored a report claiming the EU’s economic policy has created an ‘unmitigated disaster’ in mainland Europe”. Does the EU have a single economic policy?

Whatever. Bootle does go on to tell “While the leaders of the rapidly growing countries of Asia were busying themselves with the fundamentals of economic growth, in Europe their equivalents were obsessed with unnecessary and damaging integrations”. That must be why Eurozone economies are enjoying consistent growth at the moment, then.

But there is a problem with putting Roger Bootle forward as a credible face of economics: he’s got significant previous when it comes to being less than totally impartial on the EU. Specifically, Bootle is rather close to UKIP, close enough to have made a key speech to the party’s 2012 conference in Birmingham, and his schtick repays revisiting.

He said then “that the creation of the euro was a mistake and that the best solution would be for Germany to leave. What's more likely to happen is that another country beginning with G (Greece) will leave”. Wrong twice, eh? Still, he’s got plenty to say.

Such as “The downside to the Single Market is that you have to apply all its rules and regulations throughout the whole economy … In the UK’s case, about 12 per cent of our GDP is directly accounted for by exports to the EU … This means that some 88 per cent is not. Yet that 88 per cent must also obey all the EU’s rules”. Perhaps he’d like to tell us which of those rules our producers should ignore. And include his costings.

And after that, he can tell us about his links to UKIP. And why he got it all wrong about the Eurozone, which is now growing rather more rapidly than the UK is.

The more desperate the Sun gets, the easier it is to pick apart their rubbish. Here all day.
Posted by Tim Fenton at 16:32

Both born into privilege, and probably believe the bullshit they are promoting, and whatever disaster befalls us, it will harm them not one iota

Let me be the first to say it: He's a Bad Roger Bootle Meff.

And.
"A leading German economist told the chancellor a ‘no-deal’ scenario, under which the UK crashes out of the bloc without a new trading arrangement in place, would have dire consequences for Berlin.

Some words of advice for the author of this 'article' from the late, great Murray Rothbard:

“It is no crime to be ignorant of economics, which is, after all, a specialized discipline and one that most people consider to be a ‘dismal science.’ But it is totally irresponsible to have a loud and vociferous opinion on economic subjects while remaining in this state of ignorance.”