One of the new intake of Labour MPs from June’s General Election is Laura Pidcock, who represents North-West Durham, an area high up in the Pennines with many former coal and steel communities, notably the town of Consett, whose steelworks closed in 1980 and precipitated a rise in the local unemployment rate to a peak of 36%. Industrial decline has characterised much of the area for decades, despite occasional regeneration efforts. 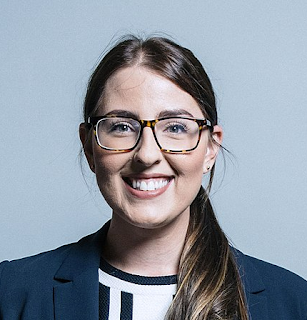 So it should have been no surprise that the area’s new MP said of the Tories “I have absolutely no intention of being friends with any of them … I feel disgusted at the way they’re running this country … The idea that they’re not the enemy is simply delusional when you see the effect they have on people - a nation where lots of people live in a constant state of fear whether they even have enough to eat”.

New, maybe idealistic and certainly determined MP has opinions No Shock Horror. But instead of acknowledging that there were good reasons for Ms Pidcock to hold those views, our free and fearless press, aided and abetted by its new media cheerleaders, went in with both feet. There were no prizes for guessing who kicked off first.

Yes, the perpetually thirsty Paul Staines and his rabble at the Guido Fawkes blog were quick to denounce her: “New Labour MP Laura Pidcock is one to watch. Labour sources say she is one of the most hard-left people in Westminster”. As if The Great Guido has any credible Labour sources. But on they drone: “Her hatred of the Tories is, in her own words, ‘visceral’. She sounds nice”. Most people are when compared to the Fawkes massive,

As so often, the sneering of the Fawkes rabble is picked up by the more desperate part of the Fourth Estate, and there is no more desperate part of it than the increasingly downmarket Telegraph, which has told “The MP was criticised for her comments by Nadine Dorries MP, who tweeted: ‘She will make a great MP. How can she fail with her politics of hate and such a hands over the ears juvenile attitude’”. 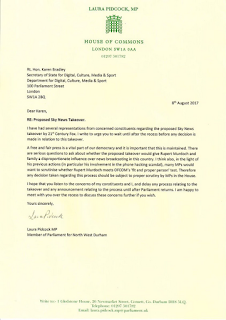 Yes, I know, Nadine Dorries calling on others for hate and having hands over ears. And the Evening Standard, once more risking becoming even more out of touch with Londoners who voted heavily for Labour in June, has also lapped up the fragrant Nadine’s snark. But isn’t this just a teensy bit OTT? Is the press so desperate for copy?

Ah well. There are two very good reasons the press establishment and its hangers-on are reacting as they are. First, Laura Pidcock gave an interview to left-leaning site Skwawkbox, which automatically makes her a legitimate target for hit jobs.

But the main reason can be seen in a letter she sent to Culture Secretary Karen Bradley earlier this month. Here, Ms Pidcock passed severely adverse comment on the idea of the Murdoch mafiosi being allowed to bid for, and then take over, the 61% of Sky that they do not already own. The new MP was particularly keen to question the suitability of the Murdochs, given the phone hacking scandal, to pass the “fit and proper” test.

So word has clearly gone out to have a hit job performed. And like so many of the other hit jobs, it will have zero impact. Still, keeps them off the streets. Small mercies and all that.
Posted by Tim Fenton at 10:29

Ms Piddock's remarks are quite mild compared with those of then Health Secretary Aneurin Bevan in July 1948 on the eve of the launch of the NHS. Nye said:

"... no amount of cajolery, and no attempts at ethical or social seduction, can eradicate from my heart a deep burning hatred for the Tory Party that inflicted those bitter experiences on me. So far as I am concerned they are lower than vermin. They condemned millions of first-class people to semi-starvation."

He then went on to say the following:

"Now the Tories are pouring out money in propaganda of all sorts and are hoping by this organised sustained mass suggestion to eradicate from our minds all memory of what we went through. But, I warn you young men and women, do not listen to what they are saying now. Do not listen to the seductions of Lord Woolton. He is a very good salesman. If you are selling shoddy stuff you have to be a good salesman. But I warn you they have not changed, or if they have they are slightly worse than they were."

It may have the welcome impact of boosting Labour Party membership numbers. Which appears to be a growing trend. Murdoch et al. really do appear to be in a bind. Their own malevolence has painted them into a corner. One of their own making.

I wouldn't expect this collection of low brow oafs to battle their way out of it using the traditional tactics of bile, hatred and smear.

So please carry on as usual!

Count me on Laura's side.

The tories are everything wrong in British society: hypocritical, selfish, greedy, racist, warmongering, hate-filled, London-oriented, lying, desensitised, seedy and thuggish. Absolute cunts the lot of them. Nor will they ever change.

Aneurin Bevan was right about them. They're a blight on democracy, decency and honesty.

Yes, definitely count me on Laura's side.

And to coin a phrase: Fuck the tories.

God knows they and their capitalism have got it coming.

Laura Pidcock, we have always got on, and I am one of extremely few people in this constituency who already knew you when you were imposed as the Labour candidate. But I'm sorry, over half the County Councillors for North West Durham are not Labour, as are nearly half the members of Lanchester Parish Council, and you now live here in Lanchester. Unless I am very much mistaken, then your constituency office is in Consett North, which has not returned a Labour Councillor in quite some years. This is just not the kind of place where the MP can be politically sectarian and separatist.

And frankly, you might understand that a bit better if you had a Political Advisor from within the Constituency Labour Party. At least to balance the one, who is also an old friend of mine, whom you have appointed from within the wider Left. His advice is doubtless invaluable on national and international matters, but he has no prior connection to this constituency, and I believe that it is correct to say that he still does not live here.

Never mind the Blairites. If the rules really were changed so that reselection would kick in unless two thirds of the CLP voted otherwise, then you would be in more danger than anyone else in the entire Parliamentary Labour Party. I have no desire whatever to see someone from the horrific world of the municipal Labour Right in County Durham as my MP, or as anyone's MP. But think on.

David Lindsay, It turns out Laura Pidcock has more concerns for the truth than she has for Labour Party bureaucratic bullshit - the kind of twisted compromise that let in the political garbage that was Blair-Brown and their fellow travellers, the kind of people who stink out and corrupt British politics. Right wing sectarians, if you will.

The woman has more courage and determination in her little finger than party apparatchiks like you. Sure she'll make mistakes, some of them horrendous. But she hasn't yet. All she has done is speak truth to power. If people like you had done so before New Labour got traction we wouldn't have had to endure the thirteen lost, disgusting years inflicted by that gang of opportunist spivs.

Good luck to Laura Pidcock. She's young enough to know the truth. While you're old enough to forget it.

Party apparatchiks like me? I've been banned from the Labour Party for as long as she has been old enough to vote.

Yes. Kicked out because you were "old enough" to forget the truth like all apparatchiks of the day.

Well done. I'm sure somebody, somewhere admires your "stand". Sectarian or otherwise.

David, your terribly condescending and dismissive tone betrays a reason for your comments: misogyny. Men never speak to other men in the tone and way you have.