From Ronan Point To Peckham

It is almost 50 years since Ivy Hodge went into the kitchen of her corner flat on the 18th floor of the then new Ronan Point tower in Canning Town, to make a cup of tea. As she lit the gas stove, there was an explosion, which threw her across the room. The blast also blew out the load bearing flank walls which supported the four flats above. This induced the progressive collapse of an entire corner of the tower. 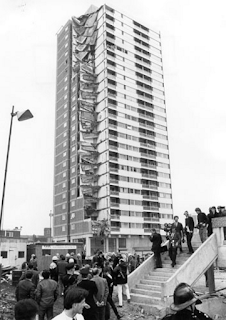 After the collapse: Ronan Point

As Ronan Point had only just been opened, many of the flats were still unoccupied, hence the relatively low death toll of four people. But the dangers of gas installations in high rise buildings were all too clear, as was the inadequate structural strength of the building’s design. So when Grenfell Tower was built in the early 1970s, regulations had been tightened up. But many other blocks had escaped those new standards

The Ledbury Estate in Peckham, in south-east London, was one example: its four 13 storey towers had been built at the end of the 1960s using the same Large Panel System technique - fabricating reinforced concrete panels off-site and then bolting them together to form the completed building - as was used for Ronan Point. Newham Council had Ronan Point demolished at the end of the 1980s. The Ledbury towers are still there.

After Ronan Point, all towers constructed using LPS were supposed to have been reinforced, not just to prevent failure in the event of a gas blast, but also to ensure the structures could adequately withstand expected wind loadings, and not collapse in the event of a fire. Ronan Point and other nearby towers were strengthened. It now seems that the Ledbury towers got missed. And they all have gas supplies.

So it should have been no surprise to read the Guardian’s report telling “Hundreds of people have been told they will have to leave their homes on an estate of tower blocks in London after safety checks carried out following the Grenfell Tower fire found the buildings had been at risk of collapse for decades”. And there was more.

“The council has immediately ordered the gas supplies to be cut off, leaving most residents without cooking facilities, hot water and heating. The letter said officials would distribute electric hotplates and that residents could take showers at a local leisure centre … The discovery that the blocks are structurally unsafe heralds a potential new series of safety worries about high-rise flats”. And not just those on the Ledbury estate.

“Arnold Tarling, a surveyor and fire safety expert who first spotted the problem at the Ledbury estate, said it was likely there would be many other blocks around the country with similar problems”. Local authorities are now desperately checking building and maintenance records to make sure any similar blocks were strengthened.

As the Guardian also points out, “An investigation said buildings built using the same method [LPS] must be reinforced, or else have no gas supply”. That’s why the Ledbury towers have had the gas turned off. It won’t be back on until the work has been done.

Fifty years on, the lessons of poor building design and rushed construction are still being learned. Thankfully this time no-one has been killed. Well, not yet, anyway.
Posted by Tim Fenton at 09:41

Most of that "poor building design" was instigated by contractors in a rush for profits. The Wimpey "no fines" system is a classic example.

All of it happened to a deafening silence from the Royal Institute of British Architects (RIBA), the Royal Institute of Chartered Surveyors (RICS), the Institution of Structural Engineers (ISE) and the Institution of Civil Engineers (ICE). All of their members stood to gain as paid consultants to contractors and developers. None of these "institutes" made any discernible protest at the moral corruption. If anything, they and relevant members were culpable as qui tacit consentire.

The Terms of Reference into the Grenfell Tower horror MUST include questions concerning the part played by these so-called "professionals" in this awful tragedy. Plus a history of how and why they behaved in such a manner. All of which should be an addition to full exposure of government legislation (AND WHICH CIVIL SERVANTS DRAFTED IT) which made it all possible.

If the courage of the Hillsborough families taught us anything, it is that there must be no hiding place for any scoundrels and institutional corruption. This must be pursued to its logical conclusion. Every stone must be overturned to expose the creatures clinging to the undersides.

The British establishment and its "institutions" and its media are unfit for purpose in a decent society. They have been so for many years. We all know it. It's time to call individuals and their motivations to account. Anything less means this country will go into even worse moral and social decay.

It's shocking that in FORTY NINE YEARS no one noticed these blocks had not been strengthened to resist another Ronan Point collapse.

At the insistence of the people affected in the disaster, Ronan Point was eventually pulled down in a controlled manner so that its construction could be examined in detail. And the findings were shocking - voids filled with rubbish, missing bolts, screws and bolts not tightened to specification, improper alignment of blocks - it's a miracle the tower stood at all. There's an accessible report (PDF) on what they found and why Ronan Point should have ensured no unsafe tower block was ever built again:

@icowboy... and yet we, or rather the typical Daily Heil and S*n reader, laugh at pictures of buildings with voids filled with empty oil cans in places like Taiwan when they were meant to be load bearing structures and have collapsed; and other countries when buildings are not up to scratch, such as tower blocks falling over because the earth below wasn't shored up or the foundations were not deep enough.

They have nothing on the shoddy work of the old "big company" builders like wimpy et. al.