Sometimes I disagree with the Guardian’s Roy Greenslade, but on one subject he has been right on the money, and that subject is the serially clueless pundit Tim Montgomerie, of whom he said last year “what is it about ‘Tory activist’ (now ex-Tory activist) Montgomerie that merits such attention? Isn’t his ‘fame’ all smoke and mirrors?” Monty was certainly a product of belief and self-promotion. But there was a problem. 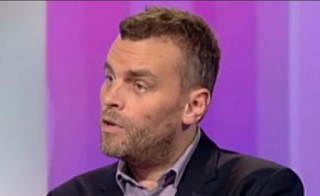 As this blog has pointed out more than once, he made the wrong call to end all wrong calls when he decreed that the Phone Hacking scandal was a Labour plot to get revenge for the ousting of Damian McBride. That the late and not at all lamented Screws was being run as a borderline criminal enterprise was the kind of minor detail he managed to miss, as was the thought that he might check the story out before pontificating.

So it has been with one of his latest disagreements: Monty told his followers yesterday “These stats on UK prisons from Jonathan Aitken in @TheSundayTimes are shocking & should be source of national shame”. Aditya Chakrabortty of the Guardian - a man with a telling Twitter bio - then reminded him “Says the guy who was cheerleader for the austerity and the party that over the past seven years led to this 'national shame’”. 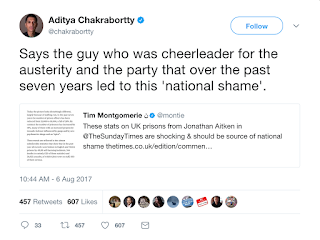 The Great Man was not going to let that go unanswered. “Austerity was (and is) a necessity - not a choice. Some pain was inevitable. Area for grown-up debate is how and where the cuts have fallen” he pontificated. I’m sure Monty believes this to be true. But the idea that austerity was a necessity - along with the “That nasty Labour lot crashed our nice new car” line - really will not do. A look across the North Atlantic may prove instructive. 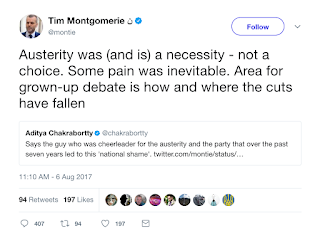 After the financial crisis hit around 2008, the response of the incoming Obama administration to increasing unemployment was to enact, in the teeth of Republican opposition, what became known as the “Stimulus program”. Right-leaning politicians lined up to denounce this largesse,while happily linking themselves with projects in their states that resulted from it. Flexible principles never looked so good. 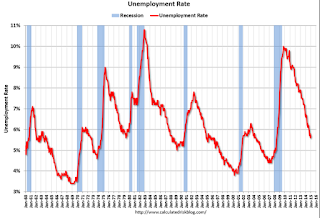 Here in the UK, the Brown Government began down that road - hence the increase in the budget deficit, which the Tories love to bang on about - but then the Coalition Government stopped all of that nonsense and brought austerity, cheered on enthusiastically by those who both thought belt-tightening a good thing, and enjoyed well-paid and secure employment. Austerity looked fine from where they were standing. 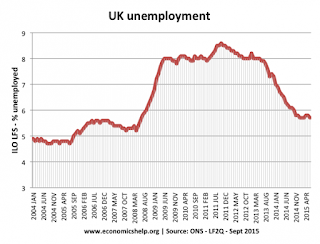 The effect on both countries’ unemployment rates can be seen from the accompanying graphs: that in the USA began to fall almost as the stimulus program was enacted. It continued to fall. It was exactly as Keynes had urged all those years ago. But in the UK, unemployment remained stubbornly high, not falling until 2013, and even then, not at the kind of rate achieved in the USA. The defence rests.

Tim Montgomerie is a friend of the USA. He will know from his visits to that country that the stimulus program did not cause the sky to fall in. Yet he keeps on claiming austerity was somehow necessary. It was not. He has called it wrong yet again.

Still, why should he worry when this kind of ineptitude is so richly rewarded?
Posted by Tim Fenton at 11:40

Kevin Rudd in Australia also introduced a hugely successful Keynesian stimulus package that saw the country slide through the 2007/2008 financially calamities almost unscathed which saved 1000s of retailers, employers and saw massive school building projects and so on.
Denounced of course by the local Tories, the Liberal National Party who today we learn are almost bankrupt even they have governed for 5 years while Rudd's Labor Party still has a huge party bank account.
It's always the way- the Tories scream they are the best 'economic managers' and history continues to show us otherwise and they have the hide (along with their media minions) to accuse Corbyn & UK Labour of being stuck in the past.

there is a common misconception in most media outlets, between "austerity", "budget reduction/consolidation" and "investment/spending"

the main problem many government encounter is how to reduce public spending without hurting GDP (and employment) growth.

it's not reduced spending that leads to reduced growth per se.
it's reduced investment and loss of revenue for disposable incomes that do.

some example :
- reducing benefits while increasing the minimum wage does not make employment suffer (while keeping same corporate taxation).
- not paying for external advisers on the latest IT gizmo or policy rebdranding, while instead spending on hard infrastructures, whether they be energy generation, tramsport, housing or communication signalling.
- prefering taxation over borrowing for the ressources needed to government spending
- borrowing for investment spending with a clear calculus of the expected financial returns, rather than current stop-gap general spending
- borrowing long-term low rates to replace short term high-rates, with the objective of eliminating any debt whose repayment is higher than the inflation/GDP growth

unforttunately so much government spending is spinned as investment when it's nothing more than expenditures spending
and far too much budget tightening is done for the ideological reason of cutting the highest bracket of taxation (via "starve the beast" policy), rather than looking at what provide public goods and what is wasteful booty for SpAds

"Austerity" didn't stop vast amounts of dosh going into projects in London. Dosh stolen from everywhere outside the M25.