The epicentre of Barcelona’s tourist circuit has to be Las Ramblas, a broad avenue that leads from the seafront - by the Columbus monument - to the Plaça de Catalunya in the city centre. The carriageways are separated by a central reservation that doubles as a pedestrian thoroughfare, made as wide as it is partly because it covers over Line 3 of the city’s Metro system, running just below the surface. 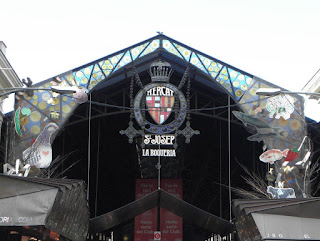 At the height of the tourist season - like now - hundreds, perhaps thousands, of visitors can be found milling around the area, shopping,visiting bars and restaurants, stopping off at the Boqueria market, or just out for a stroll. And it was that wide central reservation, with the crowds of pedestrians, who were targeted by an attacker driving a white van yesterday afternoon. Scores were injured. At least 13 have died. 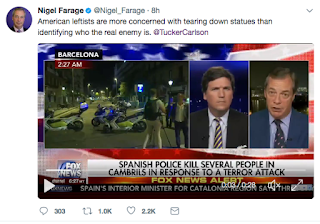 There have since been arrests; another potential attack at the coastal town of Cambrils, south west of Barcelona, was foiled and those involved shot dead by Police. It looks as if ISIS have identified another soft target and have brainwashed enough of the easily led to once again divert attention from the group’s recent military reverses in Iraq and Syria. 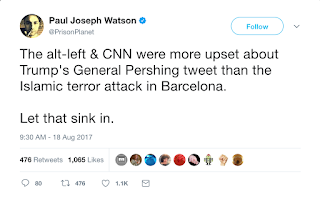 So far, so grim, but then came the inevitable ghoulish scramble of the right-wing Muslim bashers to tell anyone who would listen that they were right about, well, something. And first to the nearest studio had to be former UKIP Oberscheissenführer Nigel “Thirsty” Farage, appearing before a gravely nodding Tucker Carlson on Fox News Channel (fair and balanced my arse) to rant about securing borders. 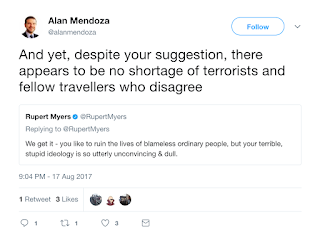 At least one of the suspects was a Spanish national, but hey ho. Opening another front, that of false equivalence and dishonesty, came Battersea basement dweller Paul Watson, to tell “The alt-left & CNN were more upset about Trump's General Pershing tweet than the Islamic terror attack in Barcelona. Let that sink in”. There is no alt-left. 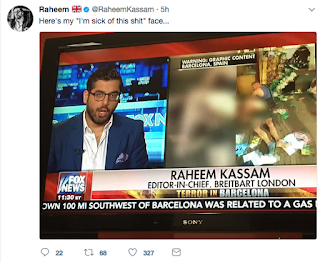 How about a sneering Soviet-era smear to break the monotony? Alan Mendoza of the hard-right Henry Jackson Society was your man for that, disdainfully replying to Rupert Myers’ concerns with “And yet, despite your suggestion, there appears to be no shortage of terrorists and fellow travellers who disagree”. How very left-bashing 1980s. 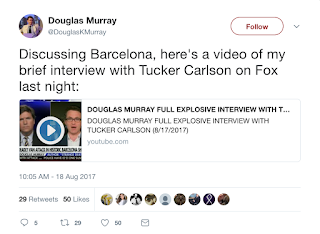 Then came the self-promotion artists waiting to advance their bank balances off the back of this attack, and one was Raheem “call me Ray” Kassam, whose recent book claims there are “no-go areas” in the UK. He was serious about self-promotion, telling “Here's my ‘I'm sick of this shit’ face”. Not as sick as most people are of him, mind. 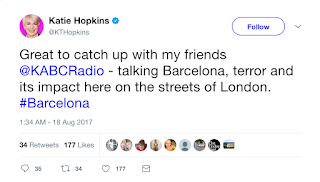 Meanwhile, and not to be upstaged by Farage, Doug Murray the K also went on Fox News to be “interviewed” by Tucker Carlson. Murray proudly told his Twitter followers “Discussing Barcelona, here's a video of my brief interview with Tucker Carlson on Fox last night”. This was held to be “explosive”. Not the wisest choice of words there.

And not wanting to be left out was pro-am motormouth Katie Hopkins, also promoting Herself Personally Now and proclaiming “Great to catch up with my friends @KABCRadio - talking Barcelona, terror and its impact here on the streets of London”. There was no impact on the streets of London, Katie. It happened in Barcelona. Still, nothing quite like ghoulishly profiting from the dead and injured to promote hate. Pass the sick bucket.
Posted by Tim Fenton at 10:50

And Trump's response to these attacks is a tweet about a debunked myth concerning General Pershing and pig's blood.

Nothing "centrist" there, then.

Are those Bad London Meffs "middle England" as defined by the Scum and Daily Heil?

Please, Tim. Without an audience, people like Hopkins and Watson have no more significance than any other damaged individual playing with themselves in their bedroom. An audience changes that a little, gives them the thrill they seek and encourages other solipsistic tantrum-wankers to emulate them.
Why make your readers complicit in this?

You forget the pompous "Libertarian" Brendan O'Neill of Spooked (can't find his quote now) who fulminates that those who criticise a bunch of ugly, overweight Nazis in Charlottesville are the ones who are really stirring up race hatred and to boot, where is their outrage over Barcelona?.
O'Neill may be incapable of being able to walk and chew gum at the same time but many of us can be equally outraged by several terrible events all at the one time. Ludicrously O'Neill seems to think because Barcelona has captured the front pages and the Charlottesville outrage has somewhat diminished, this is another reason those still complaining about the oafish dangerous fascists should now be concentrating on the dreadful act of terrorism in Spain. He therefore indicates what he really is: just another would-be tabloid bore who jumps when The Sun and it's ilk tell him to.

I genuinely believe that they are happy when Islamic terrorist attacks happen. They do not give a flying fuck about the victims whatsoever.