Former Screws and Daily Mirror editor Piers Morgan is not backwards in coming forwards to dish out the accusations of hypocrisy, as witness his recent exhibition of Twitter jealousy when attacking author Jo Rowling (she has lots more followers than him). But he does not fare well in the hypocrisy stakes himself, whatever the medium. 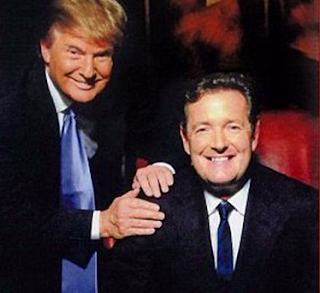 On that occasion, Morgan was saved by the studio crew and co-host Susanna Reid, who intervened to spare his blushes, but not before Harris had also reminded him of the Mirror’s complicity in phone hacking during his time in the editor’s chair. That last point has now been brought back into view - by Morgan himself

Ever willing to go into bat for Combover Crybaby Donald Trump, The Great Man took to Twitter the other day after the Washington Post revealed leaked transcripts of two phone conversations Trump had recently, one with Australian Prime Minister Malcolm Turnbull, the other with Mexico’s President Enrique Peña Nieto. The transcripts showed Trump to be a liar and a hypocrite, saying one thing in public and another in private.

Piers Morgan has no problem with this aspect of The Donald’s behaviour. But he does have a problem with those who have exposed it, having seemingly forgotten about that defence which he and his pals in the tabloid press are able to fall back on, and often legitimately - public interest. That was not allowed to enter. 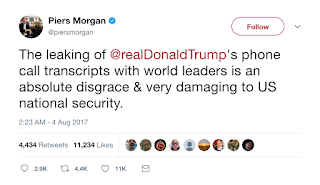 Instead, he took to Twitter to protest in the strongest possible terms: “The leaking of @realDonaldTrump's phone call transcripts with world leaders is an absolute disgrace & very damaging to US national security”. Where was US national security damaged? The revelations show he lied about the urgency of building a border wall with Mexico, and who would pay for it. No damage to national security - only to Trump’s credibility.

The phone hacking at the Mirror, which has now been shown to have occurred at the Daily Mirror when he was editor, definitely did damage security - the security of dozens of peoples’ lives, which were ruined, along with those of their families and friends, because of the repeated intrusion by those desperate to stand up stories, get leads, and of course keep up with the competition from the Murdoch press.

Last June, Trinity Mirror had put a figure of £35.5 million forward as the cost of those illegal activities. Even if Morgan had no knowledge of the hacking, as he claims, he could at least acknowledge that it was wrong and apologise for what happened when he was there.

But leaping to his pal’s defence is far more important right now. That’s the kind of hypocrisy which Piers Morgan will not be so hot on. No change there, then.
Posted by Tim Fenton at 13:09

Wonder how much of his "success" is due to his having "kompromat" (il)legally obtained? Possession of it seems to obviate nine tenths of legal redress.

Yanks lurv that kind of bullshit.

was there also not something about two of is city reporters who used to buy shares the day before they recommended them in the newspaper. Was tehre also not a rumor that Piers also bought shares as well before they appeared in print.

Whether it is illegally obtained or not is only part of the problem.
It's the blackmail, manipulation and goodness knows what else they do with it that needs to see their arses in court. If they think it'll keep the law away, they'll learn the hard way. Like others.

Looking at Piers, lately you can see the strain.

He knows there is a heavy load on him with more to come.

Lock them up and throw away the key.