Great excitement has been generated by a report telling us that what is termed “Hard Brexit” - in other words, one not requiring any kind of deal with the EU - would be potentially of great benefit to the UK. The report claims that the annual “uplift” to the economy could be as much as £135 billion. And then we discover that the principal author of this work of not-really-fiction-honestly is Patrick Minford. 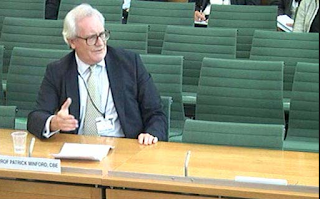 Don't go, I was just getting started ...

Minford was one of those loudly cheering on the adoption by the Thatcher Government of the monetary medicine prescribed by Professor Milton Friedman of the University of Chicago. The medicine was initially taken, inflation leapt to a peak of almost 20%, and unemployment rocketed to over 3 million. We were informed, equally loudly, by the right-wing press that “if it isn’t hurting, it isn’t working”.

None of this is allowed to enter at the Murdoch Sun, which has today championed Minford’s alleged meisterwerk. First has come an article allegedly by Dover’s Tory MP Charlie Elphicke, telling “The EU would be mad to spurn our offer of tariff-free trade and should shake on post-Brexit deal - or be stuck with a £13.2bn bill … THIS week our Government offered Brussels the deal of the decade.They would be crazy to turn it down”.

The £13.2 billion is the claimed amount of tariffs the EU would pay if they were to decline the offer of tariff-free trade. Meanwhile, the Sun’s editorial leads on praising Minford, asserting that we “Trust the man on the right side of history”. This re-evaluation of Minford’s alleged achievements requires a significant degree of creativity.

This begins with “IN 1981 Britain stood on the brink … Inflation and unemployment were rocketing, productivity collapsed and a heavy recession threatened to topple the Government … That year, 364 of the country’s top economists wrote to The Times to tell Margaret Thatcher her Budget was a disaster, compared with fewer than half a dozen who backed the PM … But the latter were ultimately proved right as Maggie went on to transform the country. One of those backers was Patrick Minford”.

The Sun manages not to tell us that there had already been two years of the measures Minford had advocated to bring the economy to that brink, and also misses the fact that the Friedman medicine was gradually abandoned. Moreover, North Sea oil revenue was there to paper over the cracks. Minford was not proved right at all.

But hey ho, have another go. “Minford also found himself in a tiny minority 35 years later as George Osborne’s Project Fear warned of an immediate collapse of the economy if we voted for Brexit … It never came and Minford again found himself on the winning side”. No-one said there would be an immediate collapse, or anything like it. But there is now a gradual economic slowdown - which was predicted.

And there is one all too obvious corollary to the idea of unilaterally scrapping tariffs: cheaper imported goods immediately become more popular than anything produced at home, leading to a balance of payments imbalance which would then result in a run on Sterling and, if maintained for any number of years, national bankruptcy.

Still, minor point, eh? Moreover, Patrick Minford has not only not been as accurate in his analysis as the Sun claims, he’s been woefully wrong more than once in recent years.

Take his advocacy of the Poll Tax - dressed up by the Thatcher Government as the “Community Charge” - of which he claimed at the time “the Community Charge has much to commend it. Opponents underestimate the political maturity of the electorate”. That was in June 1990. By the end of the year, his heroine Mrs T had been consigned to the dustbin of history - by the revolt against that same measure. And Europe.

Could it get worse? It certainly could: Minford admitted last year that “Over time, if we left the EU, it seems likely that we would mostly eliminate manufacturing, leaving mainly industries such as design, marketing and hi-tech. But this shouldn’t scare us”. Yes, all those car plants would disappear, and the jobs with them. And then there’s Airbus. And BAe. And the train builders at Derby. And lots more.

The Murdoch goons ought to know about that howler. Because he made it in an article for, er, the Sun. On the right side of history? Come off it. Patrick Minford is another of those cranks peddling outmoded economic ideas who has been passed by by the real world.

That unilateral scrapping of tariffs isn’t going to happen. And the world is not flat.
Posted by Tim Fenton at 11:03

Ruth Lea on Broadcasting House to support this article, and Minford.

By 9.30 am I'd heard Mad Mel support Trump supporting the Nazis (and using Antifa to describe the protesters, and complaining about the use of "alt-right" despite it being the Nazis own term for themselves to disguise the fact that they are Nazis), Roger Scruton attacking socialism for wanting to steal everyone's property and lock them up, and finally Ruth Lea. All courtesy of the lefties at the BBC.

"THIS week our Government offered Brussels the deal of the decade.They would be crazy to turn it down.”

No doubt the truth that the UK is negotiating from a position of weakness and that the EU holds all the trump cards will never dawn on the Murdock mafiosi.

I'd sooner take advice on agreeing a deal from Cut-Me-Own-Throat Dibble of Discworld.

Minford is a one hundred percent fucking crackpot.

His "economics" are appropriately from the city that gave the world Al Capone.

And Milton Friedman admitted before he croaked that it was a total failure. So did Greenspan of the Fed.

Not that any of it filtered through the thick fog inside Minford's skull. An utter knob head.