So Farewell Then David Bowie

Nothing is forever; no-one is immortal. So many in the world of rock and popular music have departed early; many of A Certain Age will still remember where they were and what they were doing when Elvis died, or when John Lennon was gunned down. But the striking uniqueness of David Bowie was that, although he has passed at the age of 69, he was still a force, still active, still making music. 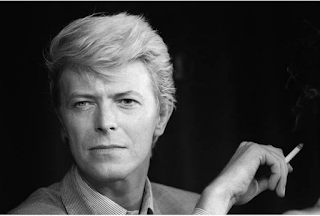 David Bowie. And that damned cigarette

That is one heck of a track record. And it was achieved by constant reinvention, of musical genre, stage persona, via a range of collaborators and in the most unexpected of settings (Bowie spent some time in the 1970s living in what was then West Berlin, a city divided and surrounded by a Warsaw Pact country, whose leaders would rather it were not there). Bowie was not unafraid of change, of making things happen.

That reinvention means that today, as news of his death sinks in, there will be so many different memories of Bowie: there are still a few who, like me, saw his first appearance in popular consciousness with Space Oddity at the end of the 1960s. Many more saw him burst onto the radar with the Ziggy Stardust persona, which generated a cult following - but which he had no qualms about killing off in the mid-70s.

In the late 70s, Bowie was almost written off: he was less visible, less successful, and in any case, he’d had a good innings. But back he came in the 80s, with a string of commercially successful albums, again reinventing himself, exploring new styles, and yes, winning new admirers. It seemed by the opening years of the new millennium that he would just go on and on through middle age, a constant in the musical firmament. But lung cancer in his late 60s would always be a difficult battle.

What was remarkable about those last months is that Bowie managed to keep his fight against The Big C away from the media: today, there will be a succession of established and wannabe hacks kicking themselves, asking why they did not pursue the story. Well, tough titty for them and good for Bowie say I: that achievement only increases his stature. It really was possible to have a private life.

So Bowie has gone, but the music remains. Just in case you’re not familiar with at least part of his oeuvre, take a moment to listen to just one song: Life On Mars, from the mid 70s, tells you why this bloke was special. It’s not just the song, not just the arrangement, not just the lyrics, not just the production, not just the performance. It’s how all of those come together, into one unforgettable whole.

Then you will know, if you hadn’t already, why so many people are talking about David Bowie. A phenomenon like him will not pass this way again. Not ever.

the significance of the moment when david bowie places his arm around mick ronson in the performance of star man shouldnt be underestimated. men didn't put their arms around other men in pubic in the early 70s - and this was in front of 20 million on top of the pops. always a mould breaker, always an innovator - david bowie really was one of a kind. we wont see his like again :(

PS. before anyone mentions the infamous 'Nazi salute' there wasn't one - people can see for themselves here https://www.youtube.com/watch?v=X1SxU83bpkU

I wasn't around in the 70s. But of course I was raised on a diet of Bowie. Once me and my girlfriend were in Birmingham New Street Waterstones (now closed, tragically) and someone walked past playing a song on their device, I forget which one it was.

And we went back and listened to Sound and Vision together, she had been feeling blue all day and somehow it cheered her up. That was the bauty of the man.

I find it fascinating people can listen to the same music in completely different ways, but everyone wins when it's as good music as this.

Sorry, Tim. I don't buy this. Much of the stuff on msm today is onanistic bullshit, particularly on the BBC - they even wheeled out the ineffable Thunderbirds puppet Norman Smith to make even more of a complete idiot of self.

Firstly, I'm sure this is a tragic loss to his family and friends, just as any other loss is to everybody else. Nor would it be sensible to begrudge anybody their memories of adolescence or personal friendship with him. What's not to like about enjoying yourself?

Secondly, to call him a "genius" or "historic" is the biggest load of horse shit since last Saturday's show jumping event.

The man was little more than a pastiche even to pop culture. He kept "rediscovering himself" simply because there wasn't much to any of the "personalities" he "discovered." He was a walking, talking public relations act with no singing voice or memorable (though capable) musical ability. A few foot tapping songs do not a musical genius make. Nor could I care less if he was heterosexual, homosexual, bisexual or even nosexual, or covered himself in make up and wore women's clothes - WTF does that have to do with music?

My bet is that if he had come from somewhere like Aberdeen, Bristol, Ipswich, Swansea or Derry you'd never have heard of him. But he was from Brixton, home of the riots, and much closer to Bullshit HQ, therefore easier to promote and more convenient to promote all the accompanying claptrap. And it was at a time when provincial Britain had produced some outstanding popular music. London then, as now, is a phony product, just as Bowie was a manufactured illusion...and I think he knew it.

The man doesn't even register on the same creative and immortal pop music radar as, for instance, Lennon and McCartney. He was a mirage covered in glue and sprayed with glitter sequins.

I don't for one second begrudge him his "success" - everybody has to make a living, and good luck to his memory - but don't try to tell me he was anything more than a chancer: In that respect he was typical of his times.

Not everyone was fooled.

Come off it, Anon - he was a bloody good singer who wrote some amazing songs (and a lot of them). And all his characters were aspects of himself. And, culturally, life in the UK would be very different now if he had never existed.

Minor point but the MSM are reporting he died of liver cancer not lung cancer as it says here. Error or do you know more?