If Rochdale’s nominally Labour MP Simon Danczuk thought that yesterday’s front page splash in the Murdoch Sun was the sum total of his latest problems, he was disabused of that notion this morning as the same paper went for him once again, with the clear message that it was time for him to step down as an MP, in an echo of the same paper’s 1992 campaign to dislodge Tory MP David Mellor from the then Government. 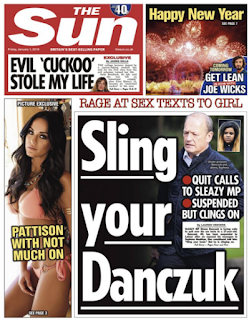 “SLEAZY MP Simon Danczuk has been suspended by the Labour Party after he bombarded a 17-year-old girl with a string of vile sex messages … Danczuk, 49, who has campaigned against child abuse, targeted Sophena Houlihan after she asked for a job. His lover saw the messages then dumped him” tells the article, and in its crusade to oust Danczuk, the Sun has some surprising allies.

Not least among those allies are an increasing number of those who voted him into power, as the Mail has pointed out in its headline “'I was only a year older than the Rochdale grooming victims': Girl, 17, sexted by Simon Danczuk blasts anti-paedophile MP as hundreds of constituents call for him to quit”. A petition has been set up demanding Danczuk go, and now. And there is more. Much more.

Sonia Rossington, the first Mrs Danczuk, has complained “My God what is he doing, he has a daughter not much younger than the girl he wants to 'spank', and his 18-year-old son has enough problems at university due to sharing the Danczuk name. Why can he not think of his children and the devastating effect his selfish antics have on them? It has been one thing after another after another, will it ever end?”

Meanwhile, Mick Coates, one of the “Rochdale Seven” expelled by the Labour Party in 2009 for expressing disquiet over the incident where Karen Burke, as she then was, was dumped at Alicante airport with no money to get back to the UK, has told Rochdale Online “The Rochdale Labour Party ought to pass a vote of no confidence because they have got to get rid of him now. If they don’t, then they won’t be helping themselves”.

Coats added “He has done so many things that could deem him unfit to be an MP and I think this is just the straw that broke the camel's back … I would like to see a review open into the Rochdale Seven. We feel vindicated now that he has been suspended but I just feel sorry for Maureen Nicholl and Mick Cummings because they are no longer with us”.

Ms Rossington, though, has warned Danczuk will be taking out his onion: “I was married to him for a long time, I know the way he operates, and I have no doubt he will already been plotting a tear jerking television interview seeking sympathy and we can expect the usual insincere apology, but nothing ever changes with Simon, he thinks he can get away with anything, and up to now he has”, she told Rochdale Online.

I am informed that there will be a protest meeting and march in Rochdale next Monday, January 4th. Zelo Street will post more information as it becomes available.

Oh, and Simon Danczuk is still facing the prospect of a defamation action over the “dirty tricks” campaign against Colin Lambert. This time it really could be the end of the road.
Posted by Tim Fenton at 10:47

If this time the Labour Party doesn't rid itself of the Simon Danczuks/New Labour gang then it never will.

They poisoned almost everything the party once stood for. What they haven't poisoned, they have compromised until it is almost worthless.

Danczuk is merely a symptom of the disgusting neocon spivs, warmongers and tenth rate opportunists who Blair led to government. Everyone who pays attention to politics knows it.

If they are booted out watch them scuttle to the tories where they belong. And good riddance too. Their natural place is with organised thievery.

And, as usual, ad infinitum, the Sun fails to see any connection between the main 'story' on its front page and the secondary story alongside it.

Mind you, that would, inter alia, imply shouldering some responsibility. As you were then.

Anon 11:51. Comrade, It's that sort of Tankie talk that could help garner sympathy with his electorate. The vastly increased majority he got in the 2015 GE was partly based on personal popularity rather than Brand Labour. Many of that majority probably agree with the tabloid knee jerk rhetoric that Danczuk echoes, such as diverting UK aid from Bangladesh to British flood victims.

Danczuk has undermined his credibility because he is he now seen by many as a drunken, selfie obsessed pervert who let his electorate down in their hour of need. Personality not politics. His past advantage will be his downfall.

Angry talk about neocon nonsense goes over the heads of most voters. In fact they are averse to any old gripes defending the old days of Militant and the Forth International.

The danger is that much of the noise on here and elsewhere looks like a vendetta based on any cheap smears or innuendo. That is a shame because Simon Danczuk has a lot of explaining to do to the people of Rochdale.

Angry talk and any old gripes about Militant and Forth International nonsense goes over the heads of most voters. Ask the Scots.

The reasons being 36 years of far right policies and a de facto one party state. Plus of course the "majority" that "probably agree" with it.

But don't let that get in the way of New Labour destruction of the Labour Party. Or the likes of Danczuk and his "personality." On the other hand there's a growing consciousness that actual policies matter more than Brand Neocon, as time will show.

Not that I expect people like you to understand that.

The real reason for the increased majority for him at the General Election was due to the massive collapse of the Lib Dems. UKIP failed to put in a viable candidate and candidate, and the Tories are very un popular in Rochdale.

Some of knew about him in 2009, but we're not listened to by the majority, a Labour only caring as a party to get elected at any cost in the seat. Still many in the LP who think like that, and don,t care about his behaviour.

I'm warning you Brits now: Wait until I get into power. Too many of you don't agree with me, so I'll stop all your entry visas. The same goes for the Cheese Eating Surrender Monkeys.

You Brits are as bad as all those dusky skinned people, Mexicans, Scary Muslims and Reservation Indians I keep alerting the world to.

That Tony Blair had the right idea, even though he was just doing as he was told by the blessed Bush family from Texas - Invade and kill as many as possible from the Middle East to Ukraine. It's the only thing they understand.

I had that Heinrich Himmler in the back of my Cadillac once. Proper gent he was.

Makes me wonder how many are entering politics because they are capable of thinking and listening or how many are in it for the power.

UKIP are a breath of fresh air and have proved that they have more sense and consideration than any party that likes to label itself as the best thing since sliced bread.

Another flaw in usual politics - too many deluded thinkers.

Charming anon 14:53 and 18:46. Someone presses a slightly different opinion and it is suggested they are a Nazi.
And so it begins.
I happen to think that Simon Danczuk has let down his constituency. I also think that Jeremy Corbyn is a breath of fresh air for British politics as people are sick to death of shallow, plastic clone career politicians who take voters for granted (as happened in Scotland too).
But if "people like me" get branded a Nazi for daring to express my opinion then what happens to the rest of the population? Off to the gulags?
Despite its many failings, our electoral dictatorship of a parliamentary democracy does still give people at least a chance to vote for change. The voters will have their say about Danczuk.
Democracy by people not politburo

Yeah, how does it feel being hoist on your own petard?

According to people like you, anybody who disagrees with New Labour and its liars and opportunists is "Militant" and "Forth International" or wants to send "the rest of the population off to the gulags."

Your kind of mentality is exactly what led to McCarthyism.

The glee from certain left wingers feels somewhat orchestrated. Especially so when relishing in lurid revelations from The Sun and Mail.
There is a danger of making Dancxuk a martyr.
Only time will tell.

The whine from certain orchestrated New Labour right wingers is par for the course.

Time has already told. But New Labour and co. closed their minds to it and became just as hypocritical and corrupt. Now they're paying the inevitable price.

YOU HAVE JUST TAKEN THE WORDS FROM RIGHT OUTTA MY MOUTH. HE TRULY IS A VILE MAN.