Among the audience watching The Andy Marr Show (tm) last Sunday was the Sun’s deputy political editor Steve Hawkes, although his purpose was not to impart information to the paper’s unfortunate readers, but generate knocking copy from the host’s interview with Labour leader Jeremy Corbyn. The result was in accordance with the requirements of Creepy Uncle Rupe: abuse and smears, laced with a generous topping of dishonesty. 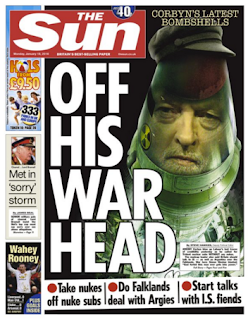 Such was the eagerness of new editor Tony Gallagher to put the boot in that Hawkes’ hokum was promoted to front page lead yesterday, readers being told that Jezza was “OFF HIS WAR HEAD” [Mental health smear: check!]. Moreover, the sub-headings asserted “Take nukes off nuke subs … Do Falklands deal with Argies … Start talks with I.S. Fiends”. Sadly, this was not entirely true (as usual).

We can be sure of this because the BBC helpfully provided a transcript of the interview, and the first subject where Hawkes proves to be of questionable veracity is that of ISIS, or whatever they’re calling themselves this week. He claimed “Incredibly, Mr Corbyn even called for negotiations with IS fanatics to find a peace deal”. Really?

Here’s what Marr and Corbyn actually said on that subject.

Marr: So we could have a dialogue with these people?

Marr suggests “But some kind of ... negotiation”, but Corbyn replies only that other countries in the area are talking to ISIS. He did not call for negotiations to find a peace deal. So that’s a pants on fire for Hawkes. 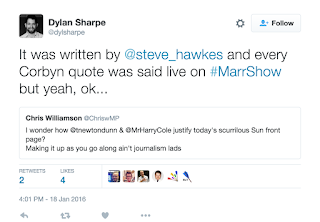 Let’s move on to the Falkland Islands. Here, the Sun claims “Mr Corbyn also called for talks with Argentina over the future of the Falklands”. What Corbyn actually said was “I think there has to be a discussion about how you can bring about some reasonable accommodation with Argentina”, which is not the same thing.

And it gets worse. He also said this of the Falkland Islanders: “They’ve got the right to stay where they are, they’ve got a right to decide on their own future”. That is no different to the stance of the British Government right now.

Hawkes also claimed that Corbyn “labelled the 1982 sinking of their Belgrano battleship a disaster” (the General Belgrano was not a battleship, but hey ho). This was a Sun favourite - taking a quote and cutting it to alter the context.

Here is what Corbyn actually said: “we had the disaster of the sinking of the Belgrano and the whole situation got worse as a result of that”.

It was only after the sinking of the General Belgrano that Argentine forces escalated their actions, and the Task Force lost the Sheffield, Ardent, Antelope and Coventry, plus the freighter Atlantic Conveyor, many sunk after being hit by Exocet missiles. It is not a coincidence that Hawkes fails to tell the Sun’s readers about that.

That is at the very least highly misleading, then.

All of which leaves the question of the Trident missile system, and the submarines which would deliver it, were it ever to be used. This is what Hawkes claims: “Under his peacenik plan, four new subs could be built to placate unions fearing thousands of jobs will be lost by his desire to scrap the deterrent … But, he declared in an extraordinary TV interview, they would go to sea unarmed with Trident missiles”.

Here is the relevant exchange from the Marr Show.

Marr: So we can have Trident submarines without nuclear warheads, could we?

Marr: You suggested just now one answer might be to keep the Trident submarines but without nuclear weapons on board, is that what you’re saying?

Corbyn: There are options there. The paper that Emily Thornberry has put forward is a very interesting one, deserves a very good study of it and read of it, and I hope there will be a serious, mature response to what is a very serious and hopefully mature debate about the nature of security and insecurity.

Readers may notice that what Corbyn actually said is not what Hawkes claims he did, and his hope for a “serious and mature” response has fallen on stony ground.

All of which demonstrates that the Sun is, as ever, not averse to bending the facts to fit its agenda. When Hawkes’ headline screams “Labour leader Jeremy Corbyn destroys final trace of credibility with latest TV bombshell over defence”, one can only conclude that the Murdoch faithful are a fine lot to be lecturing the rest of us about credibility.
Posted by Tim Fenton at 10:23

The Scum lost any credibility it had way back in 1989 after they lied and kept lying about the causes of the Hillsborough disaster.

Where Jeremy Corbyn is concerned they will get more and more desperate and tell more and more lies. It will be amusing watching them disappear up their own arses while foaming at the mouth.

So nothing has changed, or will ever change, where that nazi rag is concerned. It is owned, edited and written by the lowest level of Homo sapiens. Those who wonder how a great civilised nation like Germany could ever succumb to nazism need only look at the mass cowardice of British mainstream media employees and the disgusting far right propaganda they churn out.

We will deserve it too, for just as long as we pay them to produce it. By and large we have the kind of media we deserve. If we continue to give credence to any of their muck the future will look worse and worse.

Which is why of course they're absolutely shit scared of Jeremy Corbyn, or indeed anybody who gets right in their face. All bullies are like that - cowards to their very marrow.

Of course The S** doesn't tell the truth. It didn't in 1989 and the results have been felt up to today. However, there are no consequences for journalists there-They never suffer as they make up stuff but nothing ever happens to them.

In my work if I make up things there are serious consequences for me.Do the same at The S** and you get invited onto the BBC Question Time

I doubt most of the people who read the Sun would be watching Andrew Marr's show and wouldn't know what was actually said.
And even if the Sun offered up a correction (in 8pt on page 56) the average reader who believed that story would still believe it to be true.