After the bullying scandal broke over the Tory Party, following the death of young activist Elliott Johnson, it was widely seen as inevitable that former party co-chairman Grant “Spiv” Shapps, who had appointed alleged bully Mark Clarke to a formal role within CCHQ, would have to go. He duly went. But now Shapps is back, given a platform by the Telegraph, and making the kind of noises that will have one friend of the Tories smiling. 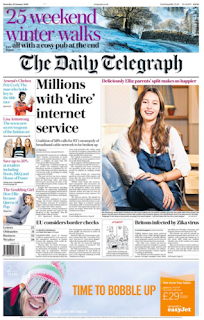 Why so? Well, apart from a suitably confessional interview given to “Senior Political Correspondent” Tim Ross, there is also an attack on BT over its broadband performance, urging the break-up of the company, based on “research” by none other than Grant Shapps, and written up by none other than “Senior Political Correspondent” Tim Ross, which, as you will understand, is a complete coincidence.

“Millions with ‘dire’ internet service … Coalition of MPs calls for BT’s monopoly of broadband cable network to be broken up” reads the headline, before readers are told that this allegedly dreadful state of affairs affects less than 10% of the population, a figure that is declining over time. “The research, published by Grant Shapps, the former Cabinet minister, says Britain’s network of ‘outdated’ copper cables must be entirely replaced with a super-fast ‘fibre’ system”, it is claimed. Which is happening anyway.

The confused logic brings forth gems such as “The poor service can leave customers waiting up to two hours to download an hour-long video, and have forced some businesses to close in the worst-affected parts of the country, the researchers say”. I’m struggling to figure out how a business closes for want of downloading an hour long video.

But the conclusion of Shapps’ “research” - no link is included in the article - is direct “BT’s Openreach division, which owns and maintains the cables, must be sold off to promote competition and improve the quality of internet services more quickly, the report says”. And who has endorsed the report? “Former Tory Cabinet ministers Owen Paterson and Liam Fox”. And that was the sound of its credibility vanishing down the plughole.

It got worse: “Mr Shapps said the public was furious with slow internet speeds. He added that he knew of individuals who had closed their businesses because of inadequate broadband speeds”. Don’t tell me, Michael Green and Sebastian Fox would be two of them, no? But enough of “Spiv” Shapps’ drivel: quite apart from a crude attempt to resuscitate his political career, this is aimed at just one other beneficiary.

Breaking up BT has been the clarion call of the Murdoch empire for some time now, as witness The Times’ “BT accused of hiding broadband failures”, and further talk of BT being broken up. The Sun ran with “VIRGIN Media has sent out a cheeky message to their internet broadband rivals BT … A team of stunning models spelt out the message ‘BT? Fast broadband? My arse!’ on their behinds in the stunt”.

So, with the help of the now-desperate Telegraph, Grant “Spiv” Shapps is angling for a way back from the wilderness to which he should have been consigned long ago, and sucking up to Creepy Uncle Rupe for a little backing. BT is a serious impediment to Sky’s ambitions. Why not get the Tories to put the boot in, as they are with the BBC? Shapps is shameless enough. The only problem is that his credibility is shot.
Posted by Tim Fenton at 10:39

The shysters continue.
The brazen bastards can't even hide it anymore.

If there is a coop going on with Schapps and Don Rupioni then surely it will be picked up in any of their communications?

Please tell me somebody is listening and watching?

My daily contact with business has taught me that BT aren't interested in small businesses at all.

Find a third party provider is my advice.

The resurgence of Atlantic Bridge?

Look, I work for Sky, so you may well doubt the neutrality of my opinions, but I work in customer service, dealing with Broadband faults and Openreach are abysmal. We have to use their network, and so we have to use their engineers, and their customer support staff and frankly they are deadly. I don't usually regard competition as the be-all and end-all of improvement, but this is one case where the lack of compensation is creating a lazy, careless business that drops the ball continually, because it knows there are no alternatives.

Yet another industry built by UK taxpayer investment is lined up to be given to non-UK tax paying chums of the tories.
At the start of Shapps interview on the Today programme he stated that BT had received £1.7bn in govt. subsidy - BT say they have had £700m so far. When challenged he immediately changed the subject. Any credibility ended in the first 20 seconds.
Tells you all you need to know about the tories that they keep this serial liar in a safe seat.

Nothing like credit where it is due, is there.

It's a bit rich, considering that BT would have provided the whole country with fibre cabling nearly 30 years ago if Thatcher hadn't stopped them (because "Competition").

I'm one of the 10% and I try to run a graphic design business in Pembrokeshire with a 4mb down load and a 0.8mb upload speed. When I send a job to a printer that's 500mb in size I have to do it overnight.

I moved my broadband from BT to Sky last year and it took nearly three months to get it working because of Openreach. It was a catalogue of cock ups and delays and more cock ups (including cutting off a separate phoneline to our home). There were issues with Sky as well but Openreach management were diabolical. I saw three Openreach engineers in that time and they were demoralised, with this state of mind reflected in their work, they couldn't care less.


Sky offered me a free trial during the summer, which I accepted. Trial ends, channels switched off. That appeared to be it.
Then last week I get a call from BPO, a debt collection agency telling me that I had an outstanding balance from my Sky subscription and they wanted payment. Called Sky, who told me that I had incurred the debt by not telling them I didn’t want to continue.
Yesterday I receive a letter from Sky offering to clear my outstanding balance if I subscribe by 29th January. Tom Watson’s mafia comment seems very apt.

Perhaps MBC then Sky should lay its own cable and hire its own staff, instead of piggybacking the BT network.

If the BT network is so bad, create a competing product that is better... but that would require investment, and reduced profit, can't have that!

Instead Sky just wants BT openreach sold off cheap so they can pick it up for a song, under invest it, and have the monopoly without any of the hard work or upfront costs - they sure as hell won't roll out to new areas or upgrade local networks.

NTL went the same way when Virgin brought it out... stopped laying cable, stopped expanding, and stopped investing... and again just piggybacked on the BT network when it added ASDL to its mix (with much smaller pipes on the back hop resulting in piss poor speeds at peak hours).

Did anyone really think that rictus grinning arsehead Shapps would disappear for ever? He and the other facile slopdope, Jeremy Hunt, are a pair of bookends holding volumes listing all the spivs and barrow boys gouging money from gullible mugs.

Old lags never change. That's why they're, er, old lags. Ask Jonathan Aitken or Brooks Newmark or Louise Mensch or any of the other suited-up thieves.

Jonathan, we would if we could. You clearly only believe in stereotypes and have no conception of the reality. Don't worry, I shalln't disturb you further.

I live in a rural area, very small village, four miles from our local exchange and there is no way anyone - BT, Sky or little green men from Planet Zog - are ever going to replace the copper cable that run underground. A few of us in the area got sick & tired of BT's snail like speeds a couple of years ago, and have signed up with a local WISP who have installed an arial on the tallest local building. BT were so unhelpful (they charge you a fee if you're not transferring your phone number to another phone company!) that loads more are leaving

So, there is competition if you're looking for it, and a from UK based small companies. Wonder why Shapps isn't banging a drum for them?

The proper place for Shapps is a prison cell, not the benches of the House of Commons.

Perhaps Murdoch hasn't realised that cross fertilization of ideas become sterile when they all come from the same source?