For a third successive day, the Super Soaraway Currant Bun has devoted part of its front page to attacking Rochdale’s nominally Labour MP Simon Danczuk, although this time round he is only the support act. “Sex text MP’s ex: I’ll finish career” is the brief yet imaginative headline for an article which is quite explicit in its direction - Danczuk’s first wife Sonia Rossington says what she knows will finish him. 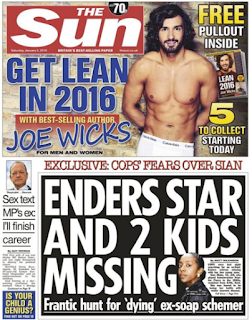 Claiming an “exclusive” (although the Mail has already lifted the copy), the piece tells “Shamed MP’s ex labels Danczuk ‘despicable’ in light of texts he sent to young girl - and threatens to bring down his political career with huge secret … THE first wife of sex text shame MP Simon Danczuk last night threatened to destroy his political career … Horrified Sonia Rossington, 39, branded her 49-year-old former husband “despicable” and an embarrassment to his children”. And there was more.

“And hinting at a devastating revelation, she warned: ‘Once I divulge this information, it does not matter if the Labour Party has suspended him or not, he will never ever have a political career again’ … And she insisted: ‘It will end it - from the moment I open my mouth’”. That’s pretty explicit stuff.

The Sun has also claimed an “exclusive” for “Simon Danczuk in lol text gaffe: I’m down with the kids ... I like the Article Monkeys … Sleazy MP’s hilarious ‘streetwise’ attempts to seduce 17-year-old revealed”, where yet more of Danczuk’s ill-advised text messages to then 17 year old Sophena Houlihan are given an airing.

Readers are told “Sophena also once referred to the song ‘Coffee and TV’ … After he was informed it was a record by Blur, Danczuk admitted he was ‘out of touch’ before boasting: ‘I’ve done Glastonbury, Reading etc etc.’ … His knowledge of music streaming services was also exposed by asking: ‘People keep telling me to subscribe to Spotify, is that right?! Do you get films on that?’” Piling on the ridicule, then. 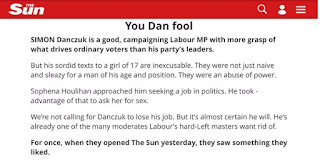 So who would claim the credit - or take the blame, depending on your stance - when Danczuk is finally caused to step down as an MP? It could only be the Sun … couldn’t it? Well, no it couldn’t - not according to the Sun. In an editorial yesterday titled “You Dan fool” (geddit?!?!?), readers are told “Simon Danczuk is a good, campaigning Labour MP with more grasp of what drives ordinary voters than his party’s leaders”. Do go on.

“But his sordid texts to a girl of 17 are inexcusable. They were not just naive and sleazy for a man of his age and position. They were an abuse of power … Sophena Houlihan approached him seeking a job in politics. He took advantage of that to ask her for sex”. And then comes the bodyswerve: “We’re not calling for Danczuk to lose his job. But it’s almost certain he will. He’s already one of the many moderates Labour’s hard-left masters want rid of”.

So there you have it: all that effort put in by the Sun’s hacks and pundits, and would you know it, it was all down to Jeremy Corbyn. Truly the Labour leader has supernatural powers, such that he can work the Murdoch press without knowing it.
Posted by Tim Fenton at 10:55

Even though the Sun were very loose with the facts.
People aren't stupid.

That is why Sun readership has dropped and continues to.

It's society that will get peace. At last!

Once upon a time, in a rogue state far, far away, there existed a thoroughly evil man in government. He was a civil servant for more than forty years. For the second half of his career he maintained his position by collecting personal information on as many "important" people as he could, especially including politicians. When it suited him, he used the information to blackmail individuals into silence or public compliance with his own far right paranoid politics. His main propaganda weapons were the threat to go public or to "leak" to the media. In fact many of the media were in his direct or indirect employ. Smears by association were usual, blacklists common, promising careers deliberately ruined. It wasn't necessary to be "guilty," only to be in proximity. Fear made control easier.

His name was J. Edgar Hoover, now universally recognised as somebody every bit as evil as anything in the totalitarian Third Reich.

But it was so long ago and in such a different country......we couldn't possibly have such people or methods in "democratic" Britain......could we?

“But his sordid texts to a girl of 17 are inexcusable. They were not just naive and sleazy for a man of his age and position. They were an abuse of power … Sophena Houlihan approached him seeking a job in politics. He took advantage of that to ask her for sex”.

So WHY aren't they calling for him to lose his job?

The practice is still alive and well today.

Where did Murdoch's and Morgan's under studies learn?

I wondered how long it would take them to try and put the blame on Corbyn, but didn't suspect it would literally be only two days! :D Sun readers are such mongs!

Is Ranting Man having a lie-in?

Whilst people are saying she should be protected,I see no evidence of him saying naughty stuff. Where did she learn such explicits from?

She could have been a plant all along, especially if Simons reactions to come ons were known to be weak.

Think of the worst, lying, hypocritical, disgusting propaganda garbage that even the Scum can manufacture. Then multiply it by ten.

That's what Murdoch's lickspittles and Dacre's piggies will try on Corbyn. It's just a matter of timing.

The difference this time round is that after years of Murdoch's corrupt neocon shit it's beginning to dawn on people that they now have the kind of evil society, economics and culture that follows. Hence the decline in his "news"paper circulations. Hence inevitable revulsion at it all and the election of Jeremy Corbyn as Labour leader.

This Danczuk stuff is just a skirmish. He's expendable. So is anybody dopey enough to trust anything the neocons say and do......like New Labour and its barrow boys and spivs.

Which is why blogs like Tim Fenton's are an important contribution. Long may it continue and flourish. There's been too much cowardice for too long.

These texts started back in the Summer ( June/July ) and the nominations for Labour Leadership closed mid June. Jeremy Cirbyn , if you recall was not seen as 'a front runner or even pace setter, in fact he wasn't given the proverbial snowball's chance in hell if being elected. So he and his supporters must have been extremely prescient to have 'set up' poor wee Simon Danczuk .
Maybe The Sun didn't let its Right Hand know what it's other Right Hand was doing when the story broke, so now they are trying hard to harness it to Bad Mr Corbyn. It would be funny if it wasn't so scurrilous

That's alright then he can keep his job with the rest of The Sun's sleazeballs?

I think they set people up just because they can.

It is about time people started telling those journos where to go.

They are a dying breed. The rug slowly being pulled from beneath them.

One thing that remains to be seen is why the government were reluctant to do anything sooner?
Maybe it served a purpose for those caught up in it.

Those who quietly revelled in seeing opposition being ridiculed will know exactly what is meant.

I beg your pardon?

Ones muscle structure is sound.