The tenure of Sun editor Tony Gallagher began with a front page splash that was very soon rumbled as a pack of lies, and appears to be continuing in the same vein, as yesterday’s alleged “exclusive” on the divorce of pundit and former footballer Gary Lineker and second wife Danielle is exposed for being equally economical with the actualité. This time, though, the subjects of the smear are the ones rumbling it. 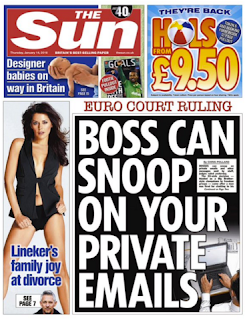 The story on the left is not true. At all

Ms Edwards, like the people in The Prisoner, wanted information: “Wanted to see whether you had any insight or knowledge into the break-down of their marriage? Can do it all off-the-record if you don’t want to be named … Editor is very keen for a story [hello Tony] … will make sure I handle it delicately”. Wayne saw her coming: “I would prefer not to comment anyway because of what happened last time”. 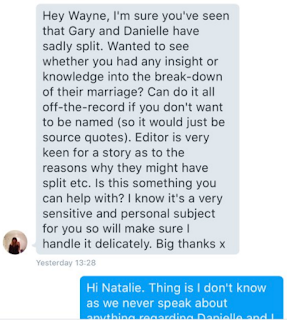 The Sun hack was not for being fobbed off: “I completely understand … It won’t be like last time [oh yes it will] as you would not have to comment as Wayne Lineker but rather it would all come as source quotes. No-one would know where it came from. We of course would pay”. Wayne deployed a straight bat: “I’m just not prepared to get involved”. So that’s that, is it? You jest: back came Ms Edwards with “Completely understand your concerns [like heck] but … The Editor has sent me out to Chigwell and I think it would be better to speak in person … Even if it’s just for a cup of tea an a life catch-up as I’ll be freezing as I’m getting dropped off by cab [not slumming it on the Central Line, then]”. Wayne was unmoved: “I’m just not prepared to comment either way”. There was also the minor matter of his not living in Chigwell any more. 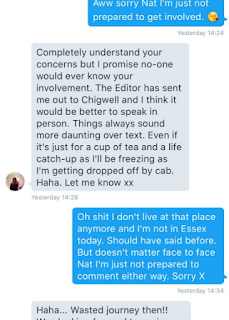 So what did Natalie Edwards do then? She decided to go ahead and make it up anyway: “I’ve told the Editor and just so you know we are planning to run a story about Gary’s family being happy with the split based on the info you gave me back in April. That Danielle didn’t really get on with your family and Gary changed etc … They also plan to re-use the quotes in the piece that we did together so your name will be mentioned that way”. 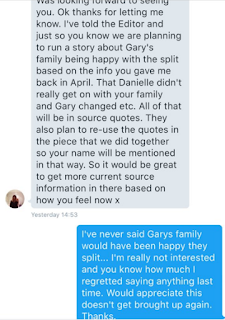 That, folks, is the Sun in one: you won’t talk to them, so they’ll make it up anyway. Wayne’s last comment - “I’ve never said Gary’s family would have been happy they split … you know how much I regretted saying anything last time. Would appreciate this doesn’t get brought up again” - just got ignored. So he had little option but to publish the contents of the text message exchanges, so everyone could see what a shower the Sun are.

Even if Wayne Lineker complains to IPSO, the Sun will fall back on a defence of “You told us last April before you were wise to us”. And Tony Gallagher won’t be fussed - after all, he clearly doesn’t give a stuff that his paper regularly prints packs of lies.
Posted by Tim Fenton at 14:50

Just read Graham Johnson's Hack so no surprises in this story. The culture of amorality is endemic at News UK and The Sun in particular.
Johnson' s book should be compulsory reading for anyone coming within a bargepole of them.
Dance with the devil and you will get burned.

That's basically blackmail there. From 'I'm on my way over' (i.e. don't you dare talk to anyone else) to the final section which is basically 'talk to us or we'll run the story we've got written anyway and set you up to be in the shit with your family'. Fair play to Wayne Lineker for not playing ball (no pun intended).

Sun lackey has the brass to say she'd handle it delicately. They wouldn't know how.

If she could, that would earn her the sack for not fulfilling her contractual responsibiities.

There's a straight forward answer to this kind of "news"paper behaviour.

Just don't buy it. You know, like they did on Merseyside. Try seeking out a copy of that rag there. If Murdoch's business relied on its sales there he'd be commercially crushed a quarter century ago.

Why anybody would want to know of sadness in a stranger's private life is beyond me, though I accept there is a twisted gene somewhere in human nature that helps reduce society to its lowest common denominator. Which is all Murdoch and his lapdog doggies are.

That "Boss can snoop on your private emails" story on the same front page is also very thin on facts, if you read what actually happened by someone who knows about these things (unlike Sun Journos)

If the "designer babies on way to Britain" story can be debunked (and how plausible does it sound, really?), that's a hat-trick of nonsense ("lies") on the front page.