News that thousands of junior doctors are to take industrial action tomorrow has sent the already febrile right-leaning press into a state of panic: here is a group of workers who are highly intelligent, highly qualified, dedicated to their profession, hard working, caring, and above all popular with the public - many of whom read those same papers. But strikes are by definition A Very Bad Thing. So the medics had to be demonised.

Here, though, a problem entered: that same public sympathised with the doctors’ grievances. There was widespread support for their stance. No matter: out came the hacks, with orders to smear, and smear they did. The problem was that the smears were so crude and amateurish as to generate little more than ridicule, and that includes attempts to suggest that the ones going on strike were all rotten lefties.

Even the supposedly upmarket Times could not get itself out of the playground, howling “Labour hard left to picket hospitals”. The phrase “hard left” is another recent import from the USA, being a staple attack line of Fox News Channel (fair and balanced my arse). Readers were told that “moderate” Labour MPs (unnamed) were opposed to the action. It was supremely lame stuff. But the Sun was about to sink yet lower. 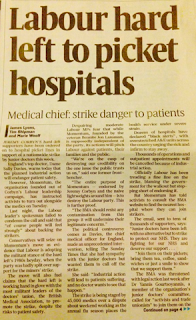 “Moet medics: High life of docs’ leaders who are heading up NHS strike … EXCLUSIVE: Pics show champagne-swilling lavish lifestyles enjoyed by striking ‘Moet medics’” screamed the headline, over an article that was only “exclusive” because the Sun hacks were the first to trawl junior doctors’ social media accounts for evidence that fitted their ludicrous claim that holidays and eating out made them somehow extravagant.

The supporting text was as lame as the headline: “JUNIOR doctors leading Tuesday’s NHS strike over new contracts are champagne-swilling socialists … The union reps have enjoyed lavish holidays and parties and some own £500,000 homes … some of the most vocal enjoy jet-set lives … a string of luxury holidays … skiing and enjoying swanky meals … pictured on a beach in front of a helicopter”. Wow! Zap!! Dull!!!

It gets worse: one of the doctors “signed a letter supporting Jeremy Corbyn for Labour leader” (er, hello Sun hacks, this is not illegal). Another of the medics “is in snaps enjoying hols and boozy parties” and was snapped on board a snowmobile (which is also not illegal, nor even extravagant). And one doctor “posted a pic of her and an elephant”. The hacks have even been publishing estimated house values.

This is so amateurish that anyone with brain engaged can see though it, and most of those commenting on the Sun article have ridiculed the Murdoch doggies for suggesting that annual leave is some kind of extravagance which mere doctors should not be allowed, especially if they have saved their pennies to enjoy a holiday abroad. What is worse, the Mail has gone along with the exercise, showing the press just doesn’t get it.

A word in your shell-like, Moet Murdoch, Bollinger Brooks, and all the rest of the Perignom press: this is another smear you have got plain flat wrong. Grow up and try doing some actual journalism for a change.
Posted by Tim Fenton at 16:33

The Sun, its owner, editor and reporters have less value to humanity than a smear of pus.

Would be interesting to do research into the Murdoch/Dacre rats, their expenses and their social lives.

As for "...anyone with brain engaged can see though it..." - that automatically excludes the morons who buy the nazi propaganda.

The NHS staff, everyone of them, are heroes who put The Scum and Daily Heil fascist lowlife to shame. To say nothing of the depths that rictus-grinning arse hole Hunt and his fellow Bullingdon Pig Boys have sunk to.

But keep your eyes on how broadcast news deals with this because they'll be just as evil but with rigged censorship by omission.

Guess who the DM has wheeled out. How many lives he has saved isn't mentioned.

Isn't it odd how Murdoch's rats and Dacre's doggies never use the term "hard right"?

Then again, perhaps not.

Journalism, especially at the national level, is an incredibly competitive field. No job security, plenty of others snapping at your heels, a constant demand for results, few of the certainties enjoyed in every other workplace, and a bullying culture thankfully outlawed elsewhere. Sure, get into the rarefied clouds of editors and columnists and you're laughing. But for a hack, it's a hard life.

One which they chose, it must be said. But understanding that goes a long way toward explaining why they're so keen to put the boot into others, and see what most would accept as standard working conditions and remuneration for a job well done as some sort of extravagance.

Any hack who abandons conscience - if it existed in the first place - to attack innocent people is guilty of the most extreme cowardice. Such cowards underpin the kind of corrupt society we presently endure. They deserve all the contempt they get. If they'd get off their knees they might learn to stand on their own two feet.

Tabloid media which these days includes such lofty titles like the Telegraph etc is a giant wounded beast. Dying on it's feet but at it's most dangerous and lashing out at all & sundry. The poor desperate hacks will be unemployed in 5 years and competing for a handful of jobs. Best wishes though Ms Hall and Rupert. They deserve each other.

Elements of BBC news have been pretty dire, too.

The story on evening's 7pm Radio 2 bulletin was ridiculously partisan, comprising only of a statement from Jeremy Hunt telling them to get back to work and a quote from someone who'd had their operation cancelled. And that was it.

For an allegedly Stalinist broadcaster chock-full of pinkoes, it is remarkably and consistently anti-union no matter what the dispute.