The Super Soaraway Currant Bun has gone into full-on hatchet job mode today against singer and campaigner Charlotte Church, for the heinous sin of not only having opinions, but voicing them, and being given an opportunity to do so by the hated BBC. This kind of free expression of views is fine for the Murdoch faithful if practised by someone of like mind, but Ms Church is not prepared to do Creepy Uncle Rupe’s bidding. 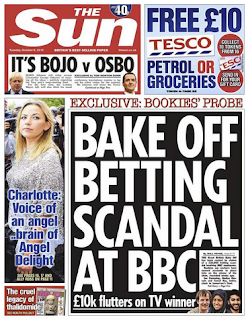 There had already been plenty of Sun ridicule over Ms Church’s appearance on Question Time last Thursday, but that merely called her “Kooky”, which is only moderately nasty (the term was used again by the paper when she spoke at a People’s Assembly event in Manchester alongside Owen Jones). But today came the front page assault, with “Charlotte … Voice of an angel … brain of Angel Delight”. 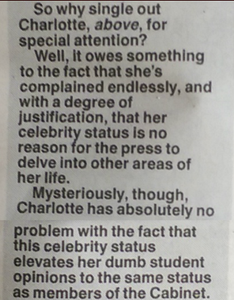 It gets worse: “So why single out Charlotte … for special attention? Well, it owes something to the fact that she’s complained endlessly, and with a degree of justification, that her celebrity status is no reason for the press to delve into other areas of her life … Mysteriously, though, Charlotte has absolutely no problem with the fact that this celebrity status elevates her dumb student opinions to the same status as members of the Cabinet”. 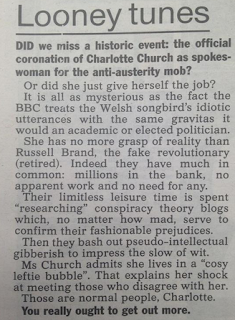 And that was just the paper’s TV “critic”. The Sun Says kicks her even harder. “DID we miss a historic event: the official coronation of Charlotte Church as spokeswoman for the anti-austerity mob? Or did she just give herself the job? It is all as mysterious as the fact [?] that the BBC treats the Welsh songbird’s idiotic utterances with the same gravitas as it would an academic or elected politician”. Jealous, Sun pundits, much?

There is, unfortunately, more. “She has no more grasp of reality than Russell Brand … they have much in common: millions in the bank, no apparent work [you didn’t bother checking] and no need for any … Their limitless leisure time is spent ‘researching’ conspiracy theory blogs [like the one you recruited from recently] which, no matter how mad [mental health smear: check!], serve to confirm their fashionable prejudices”.

You’ll love the next line: “Then they bash out pseudo-intellectual gibberish to impress the slow of wit”. And talking of the slow of wit, the Sun’s terminally useless PR Dylan Sharpe got in on the act by calling Ms Church “Charlatan Church”. So why have all the Clever People Who Talk Loudly In Restaurants gone after her? Simples. Have a look at this headline: “Charlotte Church settles NoW phone-hacking claim for £600,000”.

Do go on. “A statement agreed by the singer and the publisher of the [News of the World] read out at the high court in London on Monday revealed that Church's voicemail messages were targeted repeatedly over a number of years and that the newspaper had ‘unlawfully obtained’ and published ‘private medical information’ about her and her mother after a suicide attempt by the latter”. That, folks, is why she is being targeted.

Win an action against the Murdoch press over their illegal behaviour and the SOBs will never let you forget it. What a bunch of unprincipled and vindictive lowlifes.
Posted by Tim Fenton at 15:02

Er, this country has been ruled by far right neocons since 1979. The only "fashionable prejudices" since then have been those promoted by the likes of the ranting righties Mackenzie, Dacre and Murdoch the Ageing Creep. Mass murderers and war criminals like the Bullingdon head boy and Blair the betrayer are the main sock puppets.

Dead funny, the Scum using that word "prejudices" though.

I don't suppose her evidence at the Leveson Inquiry helped her cause with a vindictive Sun much either.

They possibly think the best way to propagate your views is to own a newspaper, employ "kooky" staff who write "kooky" articles whilst you give the Prime Ministers of the Day "kooky" instructions in secret on how to run the country? And if your lucky you "persuade" some of them to take former "kooky" staff on the payroll at No 10 just to aid them in meeting your wish list? And your puppets all shout "That's the way to do it!"

There's a certain attitude in British media - perhaps in British society - that one can only be good at one thing. And that if one attempts to branch out, to express themselves in another field, they deserve to be crucified for their nerve.

So it is with Charlotte Church, or indeed any celebrity daring to have an opinion. They're all luvvies, living in sheltered little bubbles and with no idea what goes on in the real world. Meanwhile any time a 'real world' person is interviewed by the media for their views, pains are taken to make them look as unworldly, parochial, and verbally inept as possible. Even when they're being held up as working class heroes like 'Dan the Van'; they're not laughing with you, they're laughing at you.

Believe it or not, it is possible to be famous and intelligent. It is possible for someone to have an informed view on something and a fan club. Politics is not the sole preserve of the 'political class', although it seems at times that those who decry the term the most are among those who embody it.