That there is an organised campaign to target Labour deputy leader Tom Watson has been demonstrated today by the Mail On Sunday, which has chosen to run a poorly reasoned and terribly thin hatchet job on its front page, rather than the much more substantial story on bullying in the Tory Party, which Zelo Street exclusively previewed yesterday. The attack falls apart easily - and there is a twist in the tail, too. 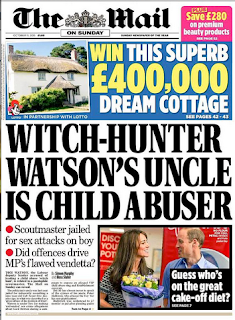 Here is the nub of the MoS story: “Tom Watson, the Labour deputy leader accused of leading a child abuse ‘witch hunt’, is related to a paedophile scoutmaster, The Mail on Sunday can reveal. The politician’s uncle was last year jailed for indecently assaulting a nine-year-old Cub Scout five decades ago, in what was described as a ‘gross abuse of his position of trust’”. So what is the reality?

One, the indecent assault, for which Peter Halliwell was jailed, happened before Watson was born, so there’s not too much he could have done about it. Two, the MoS concedes “Watson’s mother, Linda, now 72, married Halliwell’s brother, Edwin Barry Halliwell, in 1997”. Three, Halliwell has confirmed he and Watson did not meet until that time. And four, Halliwell was not charged with any offence until last year.

What was Watson supposed to do, challenge his mother to have her prospective new extended family grilled for any possible crimes they might have committed and which they might get nicked for, some years into the future? He has said of Helliwell “His victim deserved justice and I’m glad he got it”. And then the MoS, by its own admission, demonstrates that it is engaging in rank hypocrisy.

The paper claims Watson “used the fact that an innocent Tory MP had a paedophile relative to bolster his claims”, before going on “he was referring to Paedophile Information Exchange treasurer Charles Napier, whose half-brother is John Whittingdale, who was once Margaret Thatcher’s political secretary. Months after Watson’s speech, Napier was arrested and last year he jailed for 13 years for sex abuse at a boarding school”.

So why does Whittingdale not get the same front page treatment? But that wouldn’t be to the MoS’ liking, not with a headline like “BBC BASHING WHITTO’S BROTHER IS CHILD ABUSER”. No Sirree, John Whittingdale does not get the treatment - and on that count the press is right. He can’t be held responsible for what Charles Napier got up to. And nor can Tom Watson be held responsible for the actions of a relative he didn’t know at the time.

But then, one might not have expected the highest of principles from the MoS, after looking at the names on the by-line. As one Zelo Street regular has pointed out to me, Simon Murphy and Ross Slater are two of the three hacks who blagged food from a food bank in order to enable the paper to run a hit job (you can see Roy Greenslade’s Guardian piece on this episode right HERE). They’ve got no room to call out others.

In the meantime, let me end with this thought: what was Tom Watson to do when claims of sex abuse were brought to his attention - refer them to the Police and also publicise the matter, to avoid a cover-up, or ignore them? That is the kind of hard choice that MPs face every day of their careers. The press enjoys the luxury of not having to do so.
Posted by Tim Fenton at 11:06

The kind of article we expect from Daily Heil Dacre or its Sister Sunday.

While bomb blasts and wars go on around the world, the City of London is a cesspit of dirty laundering scoundrels, pride of place goes to a smear campaign against people it doesn't like. One might call it mendacious but Mr Dacre wouldn't know what that means if his use of the word in regard to matters at the Leveson Inquiry in relation to Hugh Grant revealed anything at all.

Good grief! Slimy Toby Young has come out against Tom Watson too. Probably not a surprise as he is a master of bandwagoning.

But should parents of his schools be worried that if he came into information about "happenings" at his school he would take the easy option and look the other way? Especially if the teachers selected for his schools followed the party line.

And of course, we all know why the Daily Mail is out to get Tom Watson, don't we?

Any day now I expect to see Dacre, Toby Jug, Mensch, Kavanagh, MacKenzie and Murdoch all chewing the same carpet in the same padded cell.

They look and sound more and more like the Ku Klux Klan in crackpot pointy hats, masks and white sheets, Josef Goebbels affiliated.

Utter loonies and getting worse each day. If mainstream media hacks had any sense of decency and courage left they'd denounce them outright. But they won't, because they're shit scared jobsworths.

By the way, Mensch was on BBC TV this morning looking every inch the mad New York fascist she's become. Which of course means she'll get more air time. The spaced-out Nazi fuckwit.

Lenny Henry's upbringing is currently the lead item for no obvious reason. Liberally sprinkled with the words the Mail uses to make readers think the story is important. "Secret", "sensation", "truth", "saga", and "revealed".

If the DM want's to drag up the dodgy history of somebody,s relations, how about Dacre Senior's "distinguished" war record, or the support of the Nazis and Blackshirts by a previous Rothermere?

I think that has come up before now and not so long ago when Ed Miliband was smeared on account of his father being a Marxist.
The point is the Daily Mail's creator Lord Norhcliffe created the newspaper to sell papers by being sensationalist and spicing stories up with spurious facts and not bothering too much about complaints.
Not much has changed since and nothing will while IPSO is as toothless as the IPC was being still in control of the industry itself. Now if the fines that could be imposed would outweigh the amount garnered by increased sales (or click bait revenue)that might make a difference.
While ethics is a word that Desmond does not recognise, mendacious is a word that Dacre thinks is for his own personal use only (see Leveson Inquiry and Hugh Grant testimony questioned). Irony is out of the question altogether!