With Russia beginning yet another escalation of the violence in Syria, starting a bombing campaign claiming to be targeting ISIS, or whatever they’re called this week, but in reality hitting just about everyone else bar Bashar al-Assad’s remaining strongholds, the last thing we need is another player in the region going in with both feet and making things even worse. But, for some, that thought is not allowed to enter. 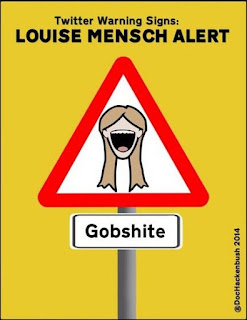 No sirree: over in her reassuringly expensive corner of Manhattan, (thankfully) former Tory MP Louise Mensch has looked at the current situation in the Middle East, considered the politics and demographics of the region, weighed up the options, carefully analysed the kinds of action available to all parties, and gamed every conceivable scenario to its conclusion, before deciding that the USA should Bomb The Bastards. 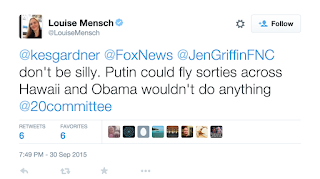 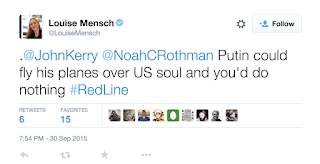 You think I jest? First comes the attack on The Prez, because he’d rather not expend yet more soldiers’ lives in another pointless conflict: “Putin could fly sorties across Hawaii and Obama wouldn't do anything”. She attacked John Kerry, too: “Putin could fly his planes over US soul [sic] and you'd do nothing”. Clearly her soul is our soul. 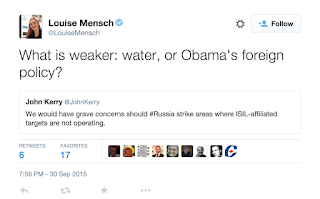 And whatever Kerry says, if it isn’t about immediate bombing, then she doesn’t want to know: “What is weaker: water, or Obama's foreign policy?” Yeah, the response isn’t what she wants to hear. Kerry is not laying down the law with those Russians, and all that will happen is that “he may tut loudly if they are not careful”. 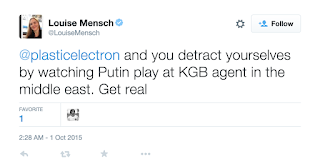 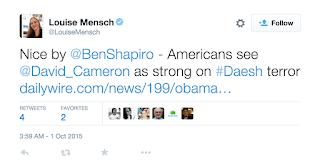 Would anyone care to debate this sincerely held point of view? Don’t bother: one who was not of sufficiently bellicose mind was brushed off with “you detract yourselves by watching Putin play at KGB agent in the middle east. Get real”. Not sure the KGB ever did overt bombing raids, Ms M. But then comes the comedy turn: “Nice by @BenShapiro - Americans see @David_Cameron as strong on #Daesh terror”. Yeah, right. 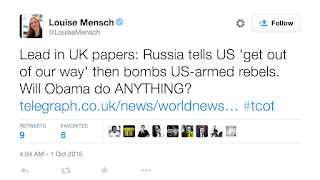 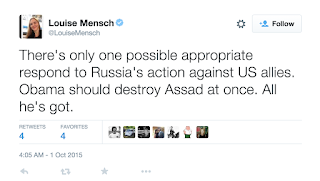 Young Dave isn’t even in the fight, and rightly so for once. Still, someone needs to DO SOMETHING: “Lead in UK papers: Russia tells US 'get out of our way' then bombs US-armed rebels. Will Obama do ANYTHING?” So what would Madam like The Prez to do?As if you need to ask: “There's only one possible appropriate respond to Russia's action against US allies. Obama should destroy Assad at once. All he's got”. 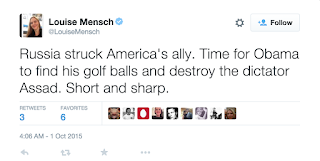 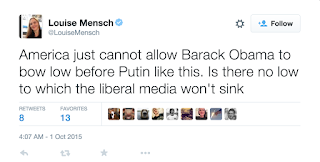 Yeah, bomb the goddam SOB A-rab assholes! “Russia struck America's ally. Time for Obama to find his golf balls and destroy the dictator Assad. Short and sharp … America just cannot allow Barack Obama to bow low before Putin like this. Is there no low to which the liberal media won't sink”. The media did it! Er, no they didn’t: there are certain niceties to be observed here, like avoiding the rest of the Middle East going up in flames.

It would also be helpful if the kinds of actions responsible for all those refugees fleeing the area were reined back. Fortunately, Barack Obama and John Kerry are in power, and Louise Mensch is not. And remember, they allowed her to become an MP.
Posted by Tim Fenton at 10:41

If she gets any more crackpot she'll be confined to a room that she can smash up without hurting anybody but herself. That's if she can see beyond the rabid foam splashing from her mouth.

There's something desperately sad about the woman and her version of madness.

Be thankful she got out of Britain to gun-mad USA where she belongs. But just think....remaining in Parliament there are quite a few who are even worse than her.

Then weep for human sanity.

How time flies! Only a few short years ago al Qaeda struck Mensch's beloved Manhattan and the Twin Towers fell.

Now Ms Mensch is describing al Nusra as our ally. Al Nusra are the Syrian franchise of al Qaeda.

She's determined to get that Fox News spot, isn't she.

Thankfully all this woman was allowed to do when an MP was sit on a few committees and try and deflect criticism of her mate Don Rupert. Heaven help the world if this type of nutter ever gets any real power.

So let's get this right. She wants Obama to destroy Assad at once, with no thought to what might replace him. Yet she's pleased to Cameron is strong on Daesh terror (although, er, Obama is doing far more on that front). And who would step into the void if Assad fell suddenly? Oh yes, Daesh.

Obviously Assad is a nasty piece of work and his brutally over-the-top reaction to the initial pro-democracy protests did much to cause the current desperate situation. But Mensch's attempts to twist it into an attack on Obama are ludicrous.

Does Louise Mensch even exist these days? She just seems to be an empty shell containing nothing more than The Will Of Rupe.

Let's agree to be free,
Let's agree on liberty,
There can be an answer, let's have equality