As the right-leaning part of the Fourth Estate refuse to drop their plainly ridiculous idea that Labour’s deputy leader Tom Watson has been “pressuring” Police and prosecutors into going on “witch-hunts”, the Murdoch Sun has opened up a new front in their offensive, where the Police become the targets, as well as the MP. “COWARDLY COVER-UP … Cops feared fury if they dropped Brittan case” screams today’s front page splash. 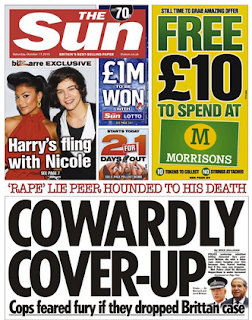 The line taken by the article can be put very simply (it is, after all, the Sun we’re talking about here): the Met is accused of knowing that the historical allegation of rape made against Leon Brittan was false, yet said nothing until after his death. This was because they were frightened of the press reaction if the case had been dropped earlier. That, though, depends on highly selective use of the available evidence.

We know this because the statement by the Met has been made available for anyone to view (read it HERE). And it shows not that the Met was scared of the press, but that the force was making sure that, on this occasion, they got the decision not to charge absolutely right - because there had been a number of allegations that they had not done so in the past where high-profile figures had been concerned.

Here’s how the Sun piece begins: “POLICE yesterday admitted letting innocent Tory peer Lord Brittan die with a false rape claim hanging over him because they feared looking bad if the case was dropped”. Wrong. Enquiries had not concluded at the time of Brittan’s death. And the claim did not meet the necessary criteria for a prosecution to be taken forward - that does not translate as “false”.

Have another go: “They failed to tell Lord Brittan two inquiries had found no evidence. Despite that, they were still trying to get the Crown Prosecution Service to take an interest”. Wrong again: the evidence did not meet the charging criteria. That’s not the same as “no evidence”. And they were not “trying to get the CPS to take an interest”. All that had been done was that the Met asked the CPS to review - to make absolutely sure.

Do we get a Tom Watson accusation? We certainly do: “The Met backtracked on a decision not to question Leon Brittan on the claim two days after it emerged that Labour’s Tom Watson had written to Director of Public Prosecutions Alison Saunders voicing concern about the investigation”. There was no backtracking: the Met was already reviewing the case when media reports of Watson’s interest surfaced.

And on goes the Sun: “By November the Met knew there was insufficient evidence to charge. But even after Crown lawyers declined to consider a file sent that month, the Met tried to appeal”. They still did not know there was insufficient evidence, and they asked for a review. Why the paper should produce such a wilfully slanted piece of copy - one hates to call it journalism - and claimed a cover-up where none existed appears mystifying.

But then, the Sun’s former political editor George Pascoe Watson once told Tom Watson “My editor will pursue you for the rest of your life … She will never forgive you for what you did to Tony”. One has to wonder who is really in charge at the Sun these days - that former editor (Rebekah Brooks) or the current one (Tony Gallagher). I’ll just leave that one there.
Posted by Tim Fenton at 10:16

In English law, everyone is innocent until proved guilty.

By now that news will have filtered through to even the most Nazi cockney employed/bribed by Murdoch and Dacre.

This applies too to the late unlamented Leon Brittan, a member of the most reactionary tory government in living memory - until the present gang of Eton thieves and spivs. Of the dead, only the truth.

But of course the Sun has never lived by the legal precept. It peddles lies, innuendo and far right propaganda as its cowardly routine. It produces faux "news" and the sort of East End media brutality that if it was translated into physical action would draw a sentence of years in the slammer.

The George Watson threat was typical of the mob-thugishness for which Murdoch's boot boys have become known - fortunately, Tom Watson had the guts to get right back in their faces. Would that we had more like Tom to stand up for decency instead of cowering behind public relations shills.

The Hillsborough disaster showed just what a gang of tenth rate mobsters the right wing press is in this country. The Sun was by far the worst, but they were far from being alone. The rest of them almost fell over each other in their efforts to smear the victims and their families. AND IT WENT ON FOR OVER TWENTY YEARS before the courage of the families finally broke through the disgusting wall of lies.

How those Murdoch lackeys can even look at themselves in the mirror each morning is beyond me. Placed alongside Ann Williams, now dead, one of the hero mothers of a Hillsborough son, they look and sound like the sorry collection of ale house thugs they are and always will be.

As for Brittan.....I couldn't give a shit. It was people like him who reduced this country to the level of a US vassal state, and turned London into nothing but the world money-laundering centre and mobbed-up loony bin it is.

But I wouldn't expect Murdoch or Dacre or their paid Nazi propagandists to remotely understand that.

The US are beginning to understand the ways of Murdoch:

The culture comes from the top and filters it's way down the ladder until you get to the expendable journalists. No wonder the hacks are afraid to upset the apple cart. The bully boy culture of the owner's organisation, as reported at Leveson and at recent trials, and his reluctance to support the more honest employees, indeed to sacrifice them to save his own and his favourite's skins says a lot about where he comes from.

I just wonder why it is that Whittindale is more interested in limiting the scope of the BBC which for all its faults is a public service yet Murdoch's US organisation which is not even a democratically run company, with its share structure favouring his family interests, is allowed free rein to promote his poison over here.

Actually no, I don't wonder at that at all. But let's leave it there, shall we "Whitters"?

Sad to hear the supposedly well educated Anne McElvoy trot out similar drivel on The News Quiz. Leon Brittan 'exonerated' of paedophile claims?
Then again if you've worked for Murdoch and currently write for the DM, proper research and the truth are alien to you.

From the Mail.
"Pressure grows on Hogan-Howe to quit as Scotland Yard chief after admission tat rape case against Leon Brittan was reopened because of fear of public backlash"
No mention that I can see of who is applying the pressure.

Even sadder to see is Fenton's deliberate and partisan skewering of Watson's role in promoting 'pedo panic' by pretending all he did was inform police - a task which he entitled to do and should do if he knows of a potential crime -when he also fanned the flames in the gutter media as seen in this article (just one of dozens)
http://www.mirror.co.uk/news/uk-news/cabinet-minister-lured-woman-flat-3558919

I am a life long Labour supporter and I cheered when Jeremy Corbyn was elected as possibly the only moderate Labour leader left after so many ghastly creatures like Mann, Watson, Danczuk etc have been allowed to run riot after the war criminal Blair, their hero. But how depressing to see an oaf like Watson be elected as deputy and if Corbyn fails it will be because the opportunist Blairite Watson will bring him down to his gutter level.
Zelo Street does good work exposing elements of Tory spin and media malfeasance but is now aiding in that with it's partisan protection of Watson and is deliberately avoiding telling the full story. Plus by not publishing criticism you are just being pathetic.

If Corbyn fails it'll be because he doesn't have enough support from the parliamentary party, which will be a political tragedy for this country. Which of course doesn't mean he won't have the majority support of party members. Watson can't bring Corbyn down on his own, but far right organised Blairites (read: tories) can.

We already know where Watson stands on nuclear weapons. He wants them, which automatically means he's willing to press the button. We'll find out soon enough where he stands on all the other major issues. That'll be the time to have a go at him and bring HIM down if necessary.

The paedophile issue isn't an easy one. But it had to be raised if only to stop mere rumour-mongering. If it leads to solid evidence of guilt of individuals or organisations then so much the better. In that regard Watson has performed a long-overdue public service. In my instinctive view there's a good deal more to the accusations than meets the eye. It's far from over yet, though doubtless the Establishment and possibly guilty parties would prefer it that way.

Tim Fenton has highlighted one aspect of it. It may be imperfect, but it's THERE. Funnily enough, it's one aspect mainstream media has avoided like the plague. Then again, given far right monopoly ownership of mainstream media, why expect anything else? How many more examples are needed on top of Hillsborough, police corruption, press hacking, banking fraud at the highest level, MPs expenses, Blair and all the other political traitors, deliberate impoverishment and unemployment, to say nothing of tory thievery of national wealth and assets?

Fenton might make you uncomfortable but so what? Tough luck if you can't face the real issues and take them on. At least Fenton makes an effort, however imperfect. So does Corbyn. And, so far as I know thus far, so does Tom Watson.