The spooks are back in the news, and despite an unseemly outbreak of grovelling support from the Murdoch empire - as confused as it is misplaced - the end result is as before: the public ends up becoming more unsettled over time. That is because all the soothing words from their press cheerleaders cannot paper over the overreach, the intrusion, and the impression that this is more than is needed to keep us all safe. 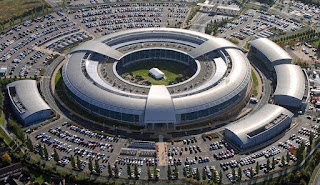 The Times has gone on a pro-spook PR offensive, telling readers of “a crisis of confidence for the intelligence services”, going on to talk of “the fallout from the revelations of Edward Snowden … two years ago”. And here the spin goes totally wrong, as the editorial continues “Quite apart from the damage done by the leaks themselves”. This remains totally unproven. It is a classic false assumption.

It gets worse: “Despite the fact that almost no concrete instance of a misuse of surveillance powers was disclosed”. Where does one start? The US intelligence agencies had been snooping on the Brazilians. They had been snooping on EU leaders. And they had specifically snooped on German Chancellor Angela Merkel, who, being an “Ossie”, did not take kindly to being reminded of life in the DDR.

And there’s more: what about the raid on the Guardian newspaper, which was forced to destroy two laptops in the presence of yet more spooks? Ah, but of course the Guardian does not count, does it? They ran stories based on the Snowden material, so they are ignored, relegated to the status of un-persons. Then, to really put the lid on the Times’ craven grovelling to authority, has come the raid on BBC Newsnight. 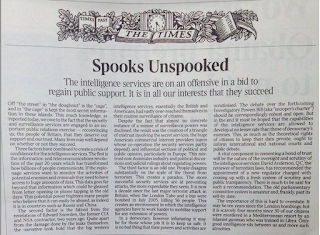 Reporter Secunder Kermani had communicated with someone in Syria who identified himself as part of ISIS, or whatever they’re calling themselves this week. As the Guardian has reported, “Journalists and press freedom campaigners criticised the seizure of the laptop, which is understood to have taken place earlier this year”. Quite. And the Times manages to miss something in its latest propaganda offensive.

The UK’s intelligence services had information on the July 7 bombers - gathering it was not the problem. The Spanish authorities admitted they had taken their eyes off the ball in the wake of the March 11 Madrid train bombings, and soon identified the perpetrators once they had re-focused their efforts. Worse for the Times is the recent use of its Sunday sister paper to blatantly provide a conduit for spook propaganda (HERE and HERE).

Back at the Times editorial, it ends by selling the pass in no style at all: “It may be ten years since the London bombings, but it is scarcely four months since 30 of our citizens were murdered in a Mediterranean resort by an Islamist gunman who was trained in Libya”. So now we’re doing the intelligence work for Tunisia as well?

Rupert Murdoch has been in with the spooks for more than 30 years. His papers’ peddling of spook propaganda is therefore as predictable as it is pointless. The Times and Sunday Times are no longer credible on this issue. End of story.
Posted by Tim Fenton at 11:07

"Intelligence services" is a contradiction in terms. They are, by and large, a collection of useless fascists with nothing better to do than kid themselves how clever they are. If they weren't spooks they'd be tattooed, shaved-head bailiffs, private prison "guards" or employed by Blackwater to kill passers by. All of it to the accompaniment of pr bullshit terms like "collateral damage," "hearts and minds" and "friendly fire." All of it promoted by far right boot-licking gobshites in mainstream media.

To believe the likes of Creepy Rupe and all the other neoNazis you'd have to believe there has never been an Operation Mockingbird, COINTELPRO or Operation Northwoods. And of course their modern successors. Which is why Ed Snowden and Julian Assange have done the world a great service, which is also why they're both hated by the "intelligence services."

Nobody with any sense of decency believes a word the lying twats in SIS, MI5 and MI6 have to say. They'd shoot their own mothers if they could feel like James Bond, even though they're mostly like a murderous Mr. Bean.

You'd also have to ignore the plot to destabilise the last government of Harold Wilson as exposed by Peter Wright - and who should know better? - in his book "Spycatcher."

Then there was the little episode of Jon Snow on C4 News when during the so-called "Arab Spring" - that didn't last long did it? - he mentioned in a blog he had met a spook in Cairo. Within an hour the blog was removed without explanation. To say nothing of course about his admitted encounter with a spook who tried to recruit him early in his career (but got rebuffed, for which he was labeled a "pinko"(!) by the old fascist crackpot Bernard Ingham)). But C4 News is a special propaganda unit anyway via the "work" of Hilsum, Rugman, Miller and Frei.

The fact is Brit mainstream media is as rotten and corrupt as the US version, sometimes much worse. Small wonder they get "embedded" during wars. After being in bed with the "intelligence" services that should be a natural progression.

You can bet your bottom Euro, Tim, there's a file on you somewhere, probably me too. All of them compiled by some bespectacled Oxbridge gobshite who has nothing better to do than rummage around in other lives that disagree with their paymasters.

But there's nothing new about any of it. It's been that way since Walsingham. There'll always be weak, pathetic informers and back entry fishwives who kid themselves they work for "intelligence."