Former Sun editor Dave Dinsmore, who has recently been kicked upstairs to make way for the arrival of Tony Gallagher from the Mail, has been sharing his thoughts with this week’s Society of Editors conference. And his conclusions can be boiled down to one very straightforward conclusion: It Was The Sun Wot Won It. Well, the Sun, along with the Mail, Telegraph and all the others rooting for Young Dave and his jolly good chaps. 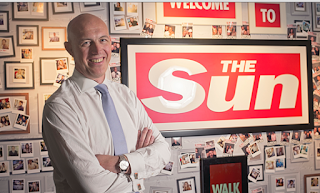 There's more Sun up his bum

Sadly, there was, as Captain Blackadder might have said, only one thing wrong with this idea - it was bollocks. But let us start at the very beginning, as it’s a very good place to start. “Former Sun editor David Dinsmore said this morning that the last general election proved to him that newspapers trump social media in terms of influence” is the claim. Then why did the Tories not register a far more resounding victory?

After all, The Blue Team had hold of by far the biggest megaphone, with Labour support being restricted to the Mirror and perhaps Guardian. The Sun, Mail and Telegraph sell millions, with the social media presence of political parties and their leaders back in the hundreds of thousands at the very best. All that Dinsmore can offer in his defence is that one “exit poll” of Twitter users had Labour well in front.

What he failed to tell was that the TalkWater poll was by definition self-selecting, as it depended on Twitter users contacting them - hence the Greens and even UKIP scoring better than the Tories. When Dinsmore claims “Social media kept talking of a Labour victory. If you tuned into Twitter during the campaign you would have assumed it was a done deal for Ed”, he’s talking crap. Unless you ignore all the Tories on Twitter.

His further claim, “There was a period for a couple of years at the start of the Coalition Government where sentiment on Twitter definitely moved government policy. They actually believed it was representative of the country. It is not the case”, is also crap. He’s just making it up. Then he sells the pass with his next claim.

Citing “YouGov research published after the election which asked voters which sources they trust to deliver political news”, he claims that newspapers are “second only to TV”. But he does not tell which newspapers, and this is a not unimportant factor: remember that in 2012, a Populus poll gave the “quality” papers a positive trust rating between 37% and 41% - but his paper, the Sun, scored a measly 9%.

Add to that the equally important factor of the Sun’s circulation, which has been falling at around 18,000 a month, with nearly half its readers gone since 2010. The Sun’s response? Employ someone from the Guido Fawkes blog, which in that Populus poll managed a positive trust rating of only 4% - worse than Twitter and Facebook. Yet on drones Dinsmore, happily pretending that he is not standing on the bridge of a sinking ship.

The era of the Sun winning elections was for a time, but not for all time.
Posted by Tim Fenton at 14:15

My bet is that the Scum hacks can feel the noose tightening, to say nothing of Creepy Rupe serving them up on a platter for Sweet Pants in the Scrubs.

There's no loyalty among liars and thieves. Only fear.

I don't know whose Twitter feeds Dinsmore was looking at - my (mostly left-wing) feed was full of people clutching at the straw that Miliband could secure enough seats for a hung parliament...

If it wasn't the press that won it, you're left with facing a couple of other reasons or issues:

Enough of the country that actually votes doesn't fancy a left leaning party in charge.

Those gave it large on twitter are a noisey minority and are either outvoted by a silent majority or they don't actually vote themselves.

More than one of the commentators slated in the blog were right and, about Corbyn, may well be even more right.

That's their politics, in case you were wondering.