What a difference a single TV show makes to the thoughts of the Daily Mail’s Glenda Emeritus Amanda Platell, who has faced in more directions than the proverbial Town Hall clock during the course of the BBC’s Great British Bake-Off, the latest incarnation of which has just ended, with mother-of-three Nadiya Hussein from Leeds winning a tense and tearful final round. Ms Platell was so pleased for her, honestly. 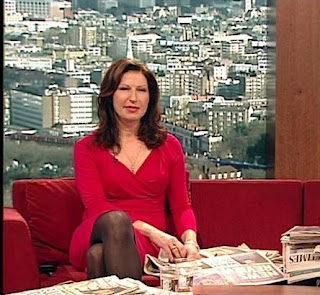 “Nadiya Hussain is now the nation’s new sweetheart, the goddess of The Great British Bake Off, as sweet and delectable as her irresistible lemon drizzle wedding cake … It wasn’t just Mary Berry who had to stifle tears at Nadiya’s triumph. We were all moved watching the happily married stay-at-home mother-of-three win after she had finally decided to break out from domesticity and do something for herself” she declared.

So she was glued to the telly, then? “Her self-deprecation and honesty were always part of her appeal during the competition … The diminutive young mother said she walked on to the Bake Off set a small person and left as a giant … And while I’m thrilled for Nadiya, I do also fear for her now she and her family have been catapulted into the seductive, cynical world of celebrity”. Mandy was clearly captivated!

However, and here we encounter a significantly sized however, it was all so different when the series started in August. Then, formula BBC bashing was the order of the day: “Whisper it, but Great British Bake Off is just SO boring … Not just a tad tedious, but mind-numbingly, yawn-makingly dull … When the show started in 2010 it was a breath of fresh air … But six interminable series later, its ingredients have curdled”.

As Sir Sean nearly said, I think we got the point. But it got worse: “It's bad enough this year's contestants seem to have been selected less on their ability to make a perfect victoria sandwich than by all the diversity and inclusivity boxes the BBC could tick”. And Nadiya Hussein is a Muslim woman who wears a hijab. That, of course, is a mere coincidence - I mean, Ms Platell wouldn’t be having a dig at her. Would she?

Well, have a look at the Platell column from last weekend: “When this series of The Great British Bake Off began, the BBC was proud it was the most inclusive, multi-cultural line-up ever [no citation] … Now we’re down to the final three, it’s certainly a PC triumph. We are left with Muslim mum Nadiya Hussain, gay doctor Tamal Ray, and New Man Ian Cumming. Poor Flora Shedden never stood a chance. She was far too middle class — and was booted off this week after her chocolate carousel was deemed sub-standard … Perhaps if she’d made a chocolate mosque, she’d have stood a better chance”.

So before believing Mandy’s insincere arsewipe about how excited she is for Nadiya Hussein, and how effusive in her praise, remember that she’s already castigated the BBC for being “boring”, and suggested that Ms Hussein’s presence was at the expense of someone else, and only because of some desire for Political Correctness.

All TV programmes that feature the general public don't choose their contestants by skill alone: they want a mix of different people who are going to be entertaining. It has always been this way.(I was once called by the "Mastermind" production office asking me to take part as they were very low of women entrants that year.)

*speculation, covering my butt as I have no idea on the topic beyond your post*