The perpetually thirsty Paul Staines and his rabble at the Guido Fawkes blog have claimed an “exclusive” today for their ability to access the publicly available Register of MPs’ Interests and then copy and paste two items out of it. We may not all live in desperate times - Zelo Street readers have already read about Fawkes blog pal Simon Danczuk’s latest difficulty, which really was exclusive - but The Great Guido certainly does. 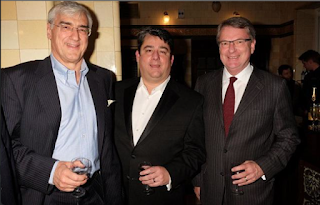 A pissed man of the people airs his views

So the very clear suggestion is that Mosley and Watson have been party to some seriously dodgy dealing. Only after all of that has been said do readers get the reality “returning to the UK in 2010”. Yes, Max Mosley has been resident in the UK for the past five years, unlike Staines, who is an Irish resident, and who has registered his blog offshore. Not that this makes him a stinking hypocrite, you understand.

Then comes this gem: “Watson’s campaign placed press regulation as his number one issue, putting Leveson front and centre of his website ahead of any other issue. What was it about their shared Murdo-phobia that convinced the German-themed spanking party enthusiast to open his chequebook?” And, as Jon Stewart might have said, two things here. One, the now defunct Screws lost its legal battle with Max Mosley.

And two, he has made no secret of his dislike of the behaviour of the press, nor that he has been prepared to underwrite the costs of many phone hacking victims, so that they had no money worries when pursuing their cases against the Murdoch empire. Mosley’s actions in the latter field were covered by Nick Davies in his book on the phone hacking saga Hack Attack, still available from all major outlets (hint).

Moreover, it is the Fawkes rabble that is achieving less than total disclosure here. One can hardly accuse others of “Murdo-phobia” when they indulge in “Murdo-philia” of the most craven and grovelling kind. The Fawkes blog says nothing that might incur the displeasure of Don Rupioni - you read nothing about Mazher Mahmood being charged there - because they are shit scared of losing their Sun column, and their influence.

So, Paul Staines and the rest of the rabble, including of course newly anointed teaboy Alex “Billy Liar” Wickham, what was it about your shared Murdo-pandering, willingness to do his bidding, and write any old crap as long as it had his approval and dumped viciously on anyone opposed to him, that convinced an Australian-born US resident with no vote in this country but an axe to grind to open his chequebook?

Take your phoney “exclusive” and shove it, Staines. Another fine mess, once again.
Posted by Tim Fenton at 14:48

This is no coincidence.

Sticking with haute couture....have you noticed how far right tories (that is, all of them) have started wearing check shirts? It's a sort of variant on the 60s/70s striped shirt syndrome, a uniform for cunts.

Murdoch lackeys to a "man."

Wonderful word "bankrolled". It sounds so much more sleazy than "funded" or "paid for".