There is much disquiet being expressed this morning at an article in the Telegraph by its resident naysayer of matters EU, Ambrose Evans Pritchard, creatively headlined “Eurozone crosses Rubicon as Portugal's anti-euro Left banned from power … Constitutional crisis looms after anti-austerity Left is denied parliamentary prerogative to form a majority government”. The largest centre-left party is not “anti-euro”. 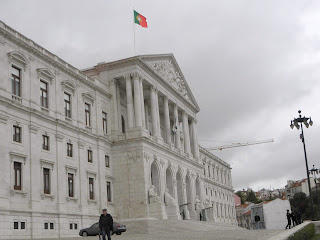 Elections in Portugal were held on October 4. The ruling coalition, led by the PSD’s Pedro Passos Coelho, lost its overall majority in the 230-seat Parliament, but remained the largest single party with 107 seats. It is also, whisper it quietly, a stable 107 seats. The centre-left won 122 seats, made up by the PS on 86, the Left Block or BE on 19, and the mainly Communist “Democratic Unity Coalition” with 17.

However, and here we encounter a significantly sized however, there is a good reason there are three centre-left factions in Portugal, going all the way back to the aftermath of the “Carnation Revolution” of 1974 that ended the dictatorship of the Novo Estado. And there has been considerable bad blood between the three groups, with the PS suggesting they might even work with the PSD to form a grand coalition.

After two and a half weeks had passed with no Government in place, Portugal’s President Anibal Cavaco Silva has invited Passos Coelho to continue as Prime Minister. He has ten days to put his party’s programme to Parliament and pass a budget - something that is now more than a week overdue. Should the new Government’s budget be voted down, the most likely outcome is that PS leader António Costa will have a go.

This has been spun by Evans Pritchard as “For the first time since the creation of Europe’s monetary union, a member state has taken the explicit step of forbidding eurosceptic parties from taking office on the grounds of national interest … [Cavaco Silva] has refused to appoint a Left-wing coalition government even though it secured an absolute majority in the Portuguese parliament and won a mandate to smash the austerity regime”.

But there was not yet a coalition in place, although the centre-left parties had indicated they would work together. Evans Pritchard justifies his line with “He deemed it too risky to let the Left Bloc or the Communists come close to power, insisting that conservatives should soldier on as a minority in order to satisfy Brussels and appease foreign financial markets”. The overdue budget is for some reason not mentioned.

Of course, Cavaco Silva’s words could also be interpreted as a concern that a PS-BE-CDU coalition would lack stability, but that would not satisfy Evans Pritchard’s desire to paint this as the Brussels bogeyman telling everyone else what to do. It is also possible that Cavaco Silva is siding with his own party (the PSD) and leaving the difficult decisions to the next President of Portugal, who will be elected next year. And won’t be him.

Whatever the reasons for Cavaco Silva’s decision, the reality is all to do with Portugal’s internal politics, than anything coming out of Brussels. And now that the Portuguese Parliament has elected Eduardo Ferro Rodrigues of the PS as its Speaker, there is plenty of scope for more fun and games in the coming days. Also remember that the PS formed a minority Government in 2009 with only 97 seats, which served for two years.

[UPDATE 1745 hours: MEP and occasional Conservative Dan, Dan The Oratory Man has suggested that this post should not be taken seriously because there was a typo in it, which has now been corrected.

Unfortunately for Hannan, that was all he could find to fault: he might find some of the comments below the post instructive, too. Until he addresses the overdue budget, the fact that the PS, BE and Communists have all campaigned separately, said they won't work with one another in the very recent past, and the inconvenient fact that Passos Coelho's coalition has the largest number of MPs - giving him first go to try and form a Government and pass a budget - I will take no lessons on Portuguese politics from him]
Posted by Tim Fenton at 13:05

I read this and thought much the same; very little to do with Brussels imposing an unwanted government on the Portuguese people and everything to do with internal politics of the country.
It's also interesting to read the actual numbers associated with the parties, and think how the British press would react if we were ever in a situation of having to choose between a minority government and cobbled-together alliance of left-wing parties. Oh wait, we can just look back at the results of the 2010 GE, when the possibility of Labour retaining power by building a "rainbow coalition", or even the relentless fearmongering at the last GE of the possibility of a Labour/SNP coalition

Whilst I agree Pritchard may have overcooked the arguments, there is something here, look at the reasons the president gave and the reactions of those involved. This is not normal constitutional process nor is it divorced from eu influence. The EU as shown with the Greece situation will not let a small thing like democracy get in the way of its aims

Oh I wouldn't be drawn into mere sophistries.

If it's in the Torygraph it's almost certainly a neocon lie, or at least a "misdirection." For the same old reasons.

As for anti-austerity.....it's Europe-wide and much more important than any "Euroscepticism" - whatever that is. Sooner or later the Left will gain ground - on this or another issue - because capitalism simply knows nothing more than greed and theft. Globalised thieves will keep on robbing and warmongering for as long as they can get away with it. It's the same old story.

Next up, Ukraine...then more Middle East mayhem. It'll never end, a boot permanently on the face of humanity, until enough people realise what's being done to them and take appropriate democratic action. In the larger scheme of things what's happening in Portugal is a mere symptom. Once resistance reaches an effective level you can bet your bottom Pentagon dollar there'll be another war somewhere. It's what econofacsists do.

I think this broadly right but I don't think you can call the CDU or BE "centre left". The CDU aren't "former communists"; it's an electoral pact between the still existent Portuguese Communist Party and the Greens. Also the the PCP never made any decisive turn to Euro-Communism or away from Leninism (although their platform always supported preserving the current republic). As for the BE I believe one faction within it still considers itself the Portuguese branch of the forth international.

And yeah, the three parties have no love for one another. I don't think anyone in Portugal, or with a clue, thought that a leftwing coalition was a natural outcome of the election once the votes were counted especially since:
the constitution gives the president a fair amount of power in such a situation (and as noted in the OP he is a PSD man)
normal practice is to give the leader of the party whose list got most votes the first go at forming a government.

I don't understand what all the fuss is about. PSD/CDS coalition, who campaigned TOGETHER, won the elections. They should be given the chance to govern. Isn't that what democracy is all about? PS only decided to make a coalition with CDU (communists) and BE (Bloco Esquerdo) after the election; they campaigned separately. And, I seem to remember, both CDU and BE said neither of them would form a coalition with PS. So why should this left (which I've nothing against, btw, if they govern wisely) contingent now say they should govern? They weren't voted in together. OK, the government might fall within a short time and then there'll be new elections (sigh).

"In 40 years of democracy, no government in Portugal has ever depended on the support of anti-European forces, that is to say forces that campaigned to abrogate the Lisbon Treaty, the Fiscal Compact, the Growth and Stability Pact, as well as to dismantle monetary union and take Portugal out of the euro, in addition to wanting the dissolution of NATO,”

“This is the worst moment for a radical change to the foundations of our democracy".

"After we carried out an onerous programme of financial assistance, entailing heavy sacrifices, it is my duty, within my constitutional powers, to do everything possible to prevent false signals being sent to financial institutions, investors and markets,”

Just a correction. There is no left coalition at all. They didn't achieve any agreement (talks still going on) and what's in place is a government of PS alone. The two communist parties agreement is just for not ruling out the socialist government in the parliament in exchange for increases in minimum wage and pensions (that kind of expensive stuff, hard to accomplish for the very poor condition of Portuguese finances)

According to Portuguese law, they can't have a "snap" election until the second half of 2016. So if the centre-left PS refuses to support the right-wing PSD/CDS government, the president must allow the PS to form government with the support of BE and CDU. Or else nothing will get done in Portuguese parliament for nearly a year.

There are (in my opinion deservedly so) 2nd class parties in greece (golden dawn),france (front nationale),austria ( remember tge reaxtiob of the portugeuese socialists to the first fpö-övp government). Why should the portuguese communists, who even last year lamented the nd of the DDR or the trostkyists and maoists from left bloc who publicly acted as apologists of ETA and IRA be treted any better?

The far-left in Portugal is anti-Euro, anti-austerity and anti-NATO. But the far-left has already agreed to stay within the Euro, abide by Euro rules (including staying within 3% deficit) and stay in NATO. Out of respect for the wishes of the majority of the Portuguese. The far-left only have just over 18% of the vote. So they respect that they can't impose their will on the majority.

I don't think a left-wing coalition is going to accomplish a whole lot of social democratic reform if they have to abide by <3% deficit and bring Portugal's Debt-to-GDP ratio down to 60% in 20 years (right now it's like 126%. It was actually lower before the EU imposed austerity on Portugal. Because austerity caused Portugal's GDP to shrink). But the majority of the country would rather have a regime in power that is sympathetic to the plight of the working-class. Rather than one (right-wing Portugal Ahead) who openly shills for the Euro bankers and cares more about the Portuguese and European bourgeoisie than they do the Portuguese working-class.