While the Tory faithful could be forgiven for swallowing Young Dave’s jolly good conference speech whole without asking whether there might be any substance behind it, one might have expected the assembled punditerati to stop and think. Many did not. Perhaps some wanted to believe that Cameron was the new centrist Messiah out of their hatred for Jeremy Corbyn. Perhaps it had been a long conference. 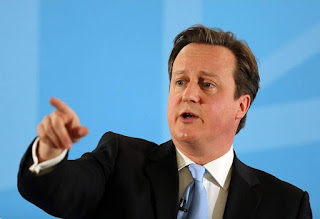 I say, you pundit cheps over thyah! Don't you be firing orf any questions about my speech, will you? Jolly good sheow!

The easily led were exemplified by Jane Merrick, who mused “Labour's gigantic problem: why did I, from a Liverpool comp, who voted for Blair & never voted Tory, agree nearly every word of PM's speech?” without checking against reality. When she was asked “so you want to see UK unions banned from social media”, the reply was only a feeble “um, that wasn't in the speech”. The contrast with Corbyn is interesting. 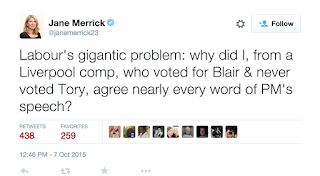 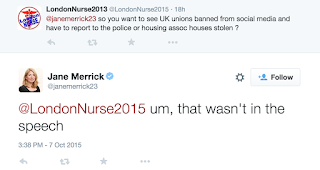 After all, pundits didn’t take what he said at face value, did they? The Labour leader’s words were summarily trashed under the heel of organised cynicism. Another being all too easily seduced was Staggers editor Jason Cowley, proffering “Cameron and Osborne more and more using the language of moderate Left: equality, opportunity, diversity, social reform, fairness”. Believe the flannel, don’t look at the reality. Again. 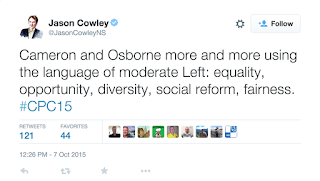 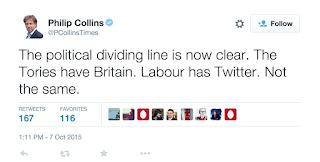 Some even echoed Dave’s bullshit speak with their own: Philip “Corny” Collins of the Times, for instance. “The political dividing line is now clear. The Tories have Britain. Labour has Twitter. Not the same”. So no questions asked there, either. James Forsyth of the Speccy also swallowed it whole: “Cameron repositions the Tories as the party of 'true equality’”. Even someone who writes for the Guardian got in on the act. 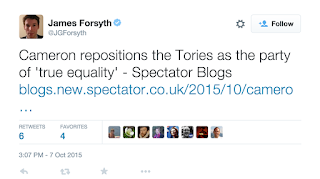 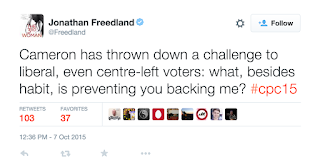 “Cameron has thrown down a challenge to liberal, even centre-left voters: what, besides habit, is preventing you backing me?” demanded Jonathan Freedland. Apart from the reality of their policies, and the kinds of people they let into their tent, you mean? How about those homes that few in the country would be able to afford? But John McTernan was on hand to rubbish that mere reality. “Entirely fatuous graphic” he sniffed. 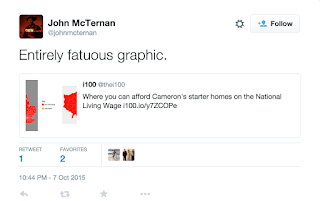 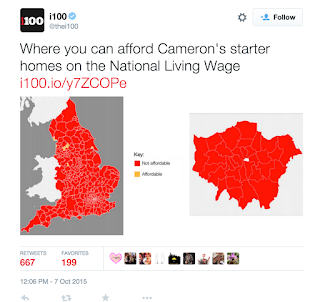 Yeah, who cares if all those hardworking people can’t afford to get on the housing ladder - Dave bullshitted about it, and that, for all too many pundits, is what matters. It’s left to the Guardian to inject a little reality: “David Cameron’s promise during his address to the Conservative party conference that ‘an all-out assault on poverty’ would be at the centre of his second term is undermined by a report that reveals planned welfare cuts will lead to an increase of 200,000 working households living in poverty by 2020”. 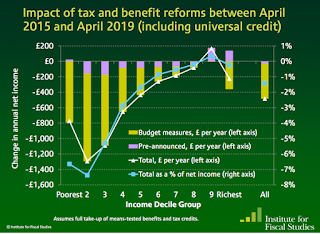 There’s more: “The [Resolution Foundation] analysis also indicates that the number of all households – both in and out of work – that will be in poverty at the end of the parliament is projected to rise by 700,000 to nearly 4 million”. The IFS’ calculation of net income changes shows that, rather than promoting equality, this Government will oversee a decline in living standards for the least well off - a decline of their own making.

Instead, too many supposedly reputable journalists have let themselves be conned by a slick, streamlined, but ultimately empty PR artist. That’s not good enough.
Posted by Tim Fenton at 10:38

The sheer lack of analysis from the media on Cameron's speech is astounding. The Prime Minister blatantly lied throughout his speech, and no-one - not even the Guardian or Independent - is calling it for what it was. Blatant falsehood.

Leaving aside utter dopes like Merrick and Cowley - the kind of birdbrains who supported Blair in his mass murdering war criminality and betrayal of every founding principle of the Labour Party - it's easy to dispose of Bullingdon head boy's lies after the Sieg Heils! have died down.

Even the Guardian briefly recovered its conscience to see him off.

All that's necessary is to watch a rerun of his hate-spitting speech and then compare it to reality. Then take uncontrolled, undemocratic tory actions to their logical conclusion.

You often hear people ask how a great civilised nation like Germany could possibly sink into Nazism, that of course it could never happen here. Well, all you have to do is look at the political record since 1979 to see just how deluded that is. Not just here, but over in the USA too.

We may not have the serried rows of military marionettes on our streets - yet - but we sure as hell have all the first signs of a Reichstag circa 1936. The marionettes are now rooftop snipers, primed and ready to fire.

We are on the verge of the experience of great and good pastor Dietrich Boenhoffer who said, "I stopped arguing with the Nazis when they became too stupid to argue with." One look at the faces of, for instance, Cameron-Johnson-Hunt-Gove-May will tell you why. And in case you missed that you can always look up the propaganda of loonies like Murdoch, Dacre and MacKenzie.

Don't kid yourself it can't happen here. It started in earnest way back in 1979.