After the sad news that young activist Elliott Johnson was found dead on the railway tracks at Sandy in Bedfordshire has come the investigation by the Tory Party into what was going on in the weeks beforehand. This has resulted in three party members having their Conference credentials revoked, with one being suspended from the party. Meanwhile, British Transport Police (BTP) continue their investigation. 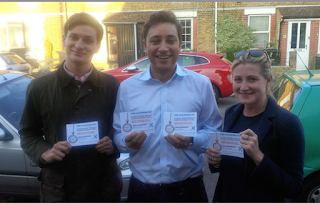 So who has been told to stay away from the Tory Party Conference, which takes place in Manchester early next month? The name that everyone has pitched, and which will not surprise Zelo Street readers one bit, is that of former PPC Mark Clarke. Clarke, it is understood, is the one who has been suspended from the party as well. Also named - by the Guido Fawkes blog, no less, is Sam Armstrong of Conservative Future (CF).

Thus far the third name has not been pitched elsewhere. I am reliably informed that this person is none other than André Walker, who was forced to resign from his post at Windsor and Maidenhead Council after he was caught attempting to smear deputy leader Alison Knight. The photo above shows Sam Armstrong, Mark Clarke, and India Brummitt, who stood for election to the City Of London Corporation alongside Walker. They lost.

And while the Fawkes blog is reticent to go into detail on the allegations levelled, particularly at Clarke, who is after all someone they know well, the Guardian has been far more open on the subject, telling “Conservative sources alleged that Clarke was said to have been angered when Johnson refused to publish an article for CWF and began to ‘make life difficult’ for the 21-year-old”. There was more.

“Johnson, a Nottingham University graduate, then made a formal complaint to the Conservative party about Clarke, who along with other individuals allegedly leant on Johnson to withdraw the complaint … Others have come forward to complain about Clarke’s behaviour, according to sources. Clarke and Johnson are also said to have had a verbal altercation in Strangers’ Bar inside parliament”.

The well-informed Blue Guerrilla has also weighed in: “Potential CF National Chairman candidate Liam Walker has taken a firm stance telling TBG - ‘I know many colleagues within CF and in the wider party have fallen victim to Mark Clarke's bullying tactics. He has been allowed to bully his way for far too long. I would fully support the party in removing his membership. He has let down all those who worked so hard on the RoadTrip project’”.

Elliott Johnson’s father Ray, who tellingly revealed that his son “found himself in a snake pit”, has said plainly “We want to find out who did these things and what happened to Elliott”. Well, the Tory Party looks as if it may do just that. The tragedy is that this kind of thing has been going on for some time, and only when someone died was action taken.

Anyone feeling depressed or suicidal can call the Samaritans on 08457 909 090 or email jo@samaritans.org for immediate and confidential support and guidance.
Posted by Tim Fenton at 10:19

This terrible tragedy is a logical result of the kind of politics and society now prevalent in this country.

The only surprise is that there isn't more of it exposed.

Rat eat rat doesn't even begin to describe it.

Will the Young Britons' Foundation be withdrawing the Golden Dolphin award which it bestowed upon alumnus Mark Clarke for "his application of the principles he learned at YBF3 in his public life since and the pioneering success of Roadtrip2015"?