Always keen to let his readers know that it’s business as usual, despite the loss of the odious flannelled fool Henry Cole to the London newspaper branch of the Cosa Nostra, the perpetually thirsty Paul Staines and his rabble at the Guido Fawkes blog have today hit upon the idea of kicking two of their pet hates in one post. So it is that those readers have been treated to an item titled “Guardian Grumbles At #Jones4Jez”. 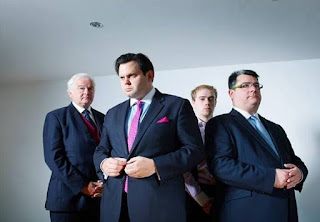 This satisfies the objective of putting the boot in on the deeply subversive Guardian, in accordance with the demands of the Murdoch press, to which Staines and his pals have so shamelessly sold out, because of the non-trivial embarrassment suffered by Creepy Uncle Rupe and his faithful retainers over Phonehackgate, while also allowing the unfeasibly jealous Staines to snipe at the more successful Owen Jones.

Jones’ presence is anathema to the Fawkes folks: his political stance is diametrically opposed to theirs on many issues, he is likeable and approachable, he gets more broadcast appearances than Staines and his pals put together, and to cap it all, he has declared his support for veteran left-winger Jeremy Corbyn in the Labour leadership contest, who, like Andy Burnham, refuses to grant the Sun privileged access.

So the predictable falsehood and misinformation began: “More than one Portcullis House onlooker noted Owen Jones working the atrium with Corbyn fixer John McDonnell and Jezza’s son on Wednesday afternoon. Whispers from the Guardian newsroom suggest the paper – which backed Cooper – is less than delighted by his overt support for Corbyn during the last few weeks”. And, as the man said, there’s more.

“‘He’s never pretended to be a journalist, he’s an activist who writes a column’, says one Kings Place source: ‘I haven’t seen him in the office for ages’. They point to Owen being on stage and sitting next to Corbyn at nearly all of his most recent rallies”. And, as Jon Stewart might have said, two things here. One, and perhaps most important, the Fawkes rabble do not, as far as is known, have a source within the Guardian.

Staines has been profiled for the paper, but that does not entitled him to get inside the office. And two, what anyone connected with the Guardian will know is that those who contribute to its content do not have to attend that office to do so. Their Westminster correspondents, for instance, are based at the Houses of Parliament and can quite happily file their copy from there - or, indeed, anywhere in the world.

On top of that, the idea that the Guardian, because it has not favoured Corbyn, has imposed some kind of blanket ban on its pundits supporting anyone else, or indeed any other party than Labour, is laughable nonsense - as is the “He’s never pretended to be a journalist”, which will have sent the paper’s staff into Smash advert mode. “Pretending to be a journalist” is what the Fawkes rabble do - badly.

So that’s another steaming pile of bovine by-product debunked. Another fine mess.
Posted by Tim Fenton at 14:36

Staines, do you understand about the inter-web thingy? Broad Band isn't what you ask your tailor to put into your trousers, old chap.

Can someone please explain how the Fawkes lot justify themselves? I mean, aside from making childish jibes at people they don't like, what is it that they actually DO? And how do they justify getting paid for it?

I await with some pleasure, the reactions when the Fawkes shower suggest that the likes of Mensch and Littlejohn attend their respective 'offices' to file their copy.