While the Super Soaraway Currant Bun’s front page dutifully tugs its corporate forelock and very humbly begs Her Majesty to accept its sincere and heartfelt praise at the length of her reign over us, on inside pages the warmongering has been ratcheted up as readers are told that, more or less, we should forget questions over the legality of execution by drone strike, and instead glory in the violent explosiveness of it all. 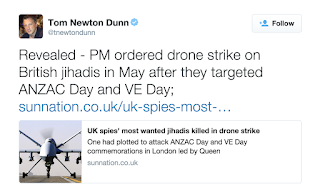 The Sun has carried a two page spread spelling out what readers are intended to think: “Poll shows massive support for RAF blitz … JIHAD IT COMING [Geddit?!?!?] … Dad of IS Brits backs drone strike … PM signs off ‘4 more kill orders’”. And don’t forget, readers, it’s all being done “For Aylan”. Like a three-year-old toddler would have endorsed the execution of others. But something is not right about this.

While the Sun is ranting and frothing about those dissenting from their gung-ho line, jeering about “Human Rights”, shouting “look over there” at what ISIS, or whatever they’re called this week, do to others, and mockingly asking whether Young Dave should have sent them a “stern letter” instead, it does not address the point that there were no attacks on Anzac Day, V E Day, Armed Forces Day, or indeed V J Day. 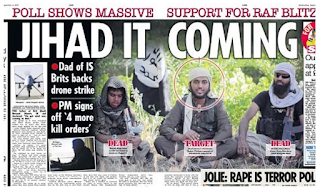 Why would Cameron sign off a “kill order” after there were no attacks on Anzac Day (in April), or V E Day (in May)? Why did the Sun claim there was a plot to attack Armed Forces Day (in June) but no other paper picked up on their story? How can anyone know that someone in Syria is “plotting” anything other than the kinds of rubbish routinely dreamt up by witless fantasists if there is no activity in the UK? 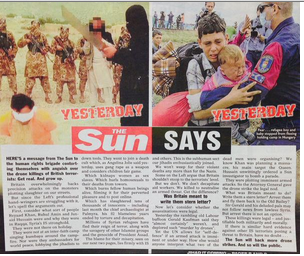 Had there been any kind of viable plot, there would have to be a UK end to the operation. Where was it? Where were the Police reports of suspects being detained, houses and business premises searched, vehicles impounded, and, more importantly, suspects being charged and almost certainly remanded in custody pending trial? There weren’t any. Yet the Sun expects its readers to take its unsupported drivel on trust. 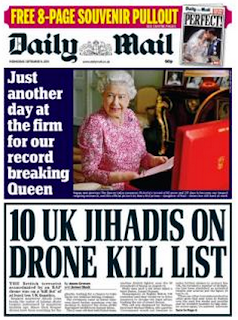 The Sun's problem - the Mail is sceptical

And, as for the “massive support”, one poll taken just after the event may not be the public’s last word, not if all the papers sounding a note of caution are anything to go by. Even the Mail is less than enthusiastic, perhaps remembering the Iraq adventure and the similarly enthusiastic tone of the Sun. The Government’s refusal to make the legal advice public will only serve to undermine that support, whatever the Sun says.

The Sun’s argument does not stand a few minutes’ analysis. No change there, then.
Posted by Tim Fenton at 14:18

Nice one, Tim. Sadly, there'll be much more of the same thing. Does Murdoch have shares in General Atomics Aeronautical Systems (makers of the MQ-9 Reaper)? Or in Lockheed Martin (who produce the AGM-114 Hellfire missile)? Or is it just the usual dyspeptic malevolence?

Two days in, predictably and as usual, the "official" narratives are looking inadequate. More to the point, the "lawful" aspect — a word too frequently elided into "legal" — is being questioned. Helena Kennedy and Lord Macdonald are on the job, and seem to suggest MoD arguments flakier than Kellogg's.

Thank goodness (indeed!) even at the drop of the first poll, 16% of us are leery about this mucky, mucky business. No amount of Murdochian cheer-leadership is going to stop questions being asked, or doubts growing.

With each passing day, that rag and its employees sound more and more like 1938 Nazi Germany.

And to think there are STILL those naive fools who think, "It couldn't happen here"..........Oh REALLY? Just stick around and see what happens when Ukraine kicks off its West-instigated mass-murderous mayhem again.

Moreover it will get still worse when inevitably some "Islamic" homicidal maniacs inflict yet another Charlie Hebedo or Tunisia on innocents. Nothing is more certain.

The Sun, its owner and its employees are a disgrace to everything we hold civilised. Shame on those who buy its disgusting hypocritical muck.

Reason behind The Sun's aggressive desire to promote war? Murdoch owns shares in Genie Oil & Gas, licensed by Israel to dig for shale oil in Syria. Yes, it's been licensed to dig for oil in another country, the only obstacle being the Assad regime.

Israel have licensed the Israeli Afek Oil and Gas Company to dig for oil in the Golan Province of Syria, they've licensed them to dig for oil on the borders of another country. Afek is owned by Genie Energy. Genie previously announced a strategic advisory board whose members provide strategic direction and council. Its members include former Vice President Dick Cheney, Michael Steinhardt, Jacob Rothschild, and Rupert Murdoch. These guys also have share holdings in the company. It would explain The Sun's aggressive pro war bias of late, if we start bombing Syria. Afek can dig in Syrua where large areas of shale oil reserves reside.

Off main topic but possibly linked, some of Murdoch's publications involvement with the spooks is possibly one of the reasons why the Daniel Morgan murder has remained unsolved for so long?

The Met couldn't have botched so many investigations without their help, could they?

What say you Alex Marunchak? See Peter Jukes's articles on Byline for reference on him.

Sadly if my Facebook timeline is anything to go by, plenty of people do willingly believe the rabid, right-wing fever dreams the Sun and its ilk are peddling, with countless of videos and pictures purportedly depicting rioting "so-called refugees" refusing aid packages and assaulting police officers; all used as evidence t back up claims that ISIS is using the refugee crisis to infiltrate and invade Europe

J rothschilds also had interests in yukos -russian oil before putin jailed khodorkovsky.he was also a director of sky.an investment banker who became friends with murdoch soon after his arrival in UK