The Super Soaraway Currant Bun was in the vanguard of those urging the sainted Tone to press ahead with the Iraq adventure. It was notoriously gung-ho at the time of the Falklands conflict under the less than benign leadership of the revolting Kelvin McFilth. It wanted the UK to drop bombs on Syria two years ago. So it is no surprise at all that its reaction to the wave of refugees is to, er, drop even more bombs.

“BRITAIN has a proud history of compassion towards victims of disasters, whether they’re natural or man-made” declares today’s editorial, before asserting “And few man-made disasters have been worse than the migrant crisis created by the butchery in Syria … It’s not just the country’s rival forces who are to blame. Two years ago we could have acted to stop it. But we didn’t … Our armed forces were ready to step in alongside America. David Cameron wanted up to help … At the last minute, Ed Miliband decided to play politics with Syrians’ lives and vote against British military action”.

And, as Jon Stewart might have said, two things here. One, what was being proposed two years ago would have put us on the same side as what then became ISIS, or whatever they’re calling themselves this week. And two, all that was being proposed was the dropping of bombs on Syrian targets. This would inevitably have led to deaths.

Yes, the loss of “Syrians’ lives”. So when the Sun claims “Today’s refugee crisis is a direct result of that failure to act. Syria has descended into an unimaginable hellhole”, this is the most amateurish bullshit. All we would have done would have been to kill more Syrians. It would have made the refugee crisis worse, not solved it. 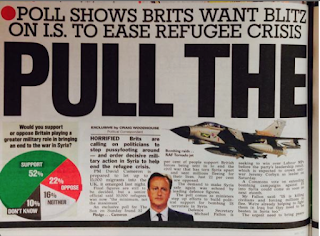 But they have a poll to back them up - yes, one of those polls that were wrong at the General Election, but right when they return the result the Sun wants to hear. “Our poll today shows that voters are way ahead of politicians in grasping this. Some 52 per cent say Our Boys must get involved now and help put an end to the fighting”. Given the Russians are also in the area, Our Boys getting involved may do the exact opposite.

In any case, two can play at this poll game. There is a Survation poll out today which shows just 29% of all voters are in favour of military intervention, with 48% opposed. There is no majority for getting involved. Moreover, much of the instability in the region is directly attributable to the 2003 Iraq War. On top of that, the Sun claims to be supporting Our Boys, but it’s always the first to want them to be put in harm’s way.

If Stanley Baldwin ever got one thing right, it was to tell of the press “What the proprietorship of these papers is aiming at is power, and power without responsibility - the prerogative of the harlot through the ages”. The Sun does not have to relay the bad news to soldiers’ families, to help rebuild shattered countries and their peoples, and nor does it have to face the electorate. For them, anonymous cowardice is a way of life.

We have already deployed more than enough high explosive help across the Middle East. And there are already more than enough ruined lives as a result. We do not need to get drawn into another pointless war. The Sun can take its rabble-rousing and shove it.
Posted by Tim Fenton at 16:24

There's a sort of soap opera of propaganda developing on this, particularly on C4 News, where - as you would expect - Hilsum and Rugman have been their usual far right selves.

As with the Scum editorial, it is deliberate use of the "crisis" to have a go at the Assad gang in the West-instigated civil war. Whenever the "crisis" comes up, Rugman and Hilsum usually manage to get in mention of "Assad regime" and "barrel bombs."

Two things here. According to UNHCR, Syrian refugees comprise about 20% of the total number trying to get into Europe. Meanwhile, neither Hilsum, Rugman or Miller have managed a single report on the Saudi Arabian regime and its mass murders of Yemenis with cluster bombs (and other weapons) manufactured in the USA and Europe.

Assad is indeed an evil dictator. But so is the Saudi regime and all the other puppet governments in the Gulf propped up by the USA-led West. None of those governments have uttered so much as a word of support, let alone taken any action on, the tragedy of refugees in the region. The only thing they've done is fund and support the ISIS murderers. But not a word on that either from Hilsum and co. The Scum of course just lies its head off, as usual. So does the rest of Brit mainstream media.

The REAL target in the Middle East has always been ANY regime that tries to behave independently. We saw and are seeing the same thing in Central and South America and Eastern Europe.

Just wait until the same lunatic Western imperialists get started in Africa again.

Two years ago we would have done THE EXACT FUCKING OPPOSITE, bombing Assad and helping his enemies (including ISIS). The Sun must know this, even they're not that stupid. So they must hope their readers are.

I'd not be so sure. The complexities of middle eastern politics will be lost on the readership, so why bother explaining them at all? They're all uppity forrins who need some manners bombing into them. Followed up by a visit from the SAS, or Johnny Gurkha. So what if it doesn't accomplish anything? It'll be great for visuals and we can have some opinion pieces by Andy McNab and we can call anyone we don't like cowards and traitors and...oh, I've just come.

"The Sun must know this, even they're not that stupid."

The Sun appears to believe that it doesn't matter who you bomb. It is the act of bombing that makes the West strong. If the West just bombs somebody, then the uppity natives will see the game is up and stop fighting. (This has been shown to be false over the last 14 years, and the results of this error have been shown to be disastrous. But, for the Sun, that appears not to matter.)