Today, Queen Elizabeth the Second becomes our longest-serving monarch, beating the record set by Queen Victoria. In celebration she has been in Scotland performing the official opening ceremony for the new Borders Railway. The press has been marking the occasion, and, as there is no more ardently Royalist title than the Daily Mail, it has been no surprise at all to see their US Editor-at-large Piers Morgan in suitably grovelling mood. 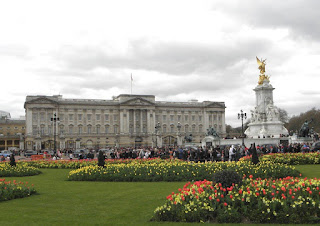 “'Thank you for every amazing minute, Ma'am - all 33,460,800 of them’” begins the headline, as Morgan and his paper go wrong before reaching the first hurdle. He wasn’t there for the first thirteen years of the Queen’s reign. That might be why he then asserts “The Queen has scarcely put a regal foot wrong during her entire six-decade tenure”. To his credit, he does mention one later, but misses a few.

There was the - largely unreported, though it would be nowadays - socialising and partying during the 50s by the bloke who was supposed to be at her side, Prince Philip, which came to an end when she eventually put her regal foot down. Rather more significant, and again, not widely understood until well after the event, was the way in which Harold Macmillan used the Queen to prevent Rab Butler becoming Prime Minister in 1963.

An older and wiser Queen might have seen Macmillan’s chicanery coming: he got her to send for Alec Douglas-Home, then in the Lords, whom Mac judged to be the right kind of person to lead the Tory Party. Elizabeth went along with her Prime Minister’s wishes. Many ordinary Britons did not understand what was happening, but the staff at the then still new satirical magazine Private Eye did, and lost no time telling their readers. 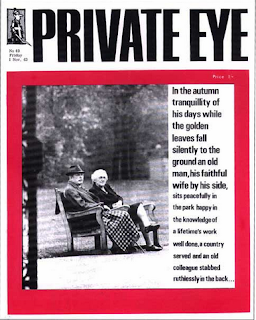 Issue 49 showed a photo of Macmillan and his wife on the cover, with the comment “In the autumn tranquility of his days while the golden leaves fall silently to the ground an old man, his faithful wife by his side, sits peacefully in the park happy in the knowledge of a lifetime’s work well done, a country served and an old colleague stabbed ruthlessly in the back”. That happened before Morgan was born, but research, eh Piers?

Meanwhile, he concludes “I have no hesitation in proclaiming her as the single greatest British Monarch of them all”, before releasing the inner Mr Creosote in all his readers by letting them into a secret: “I’ve met the Queen three times”. Could have been worse for her - she probably had to meet Kelvin McFilth as well.

After that, Morgan pauses only to tell “I suspect we won’t really understand the astounding debt we owe this remarkable woman until she is no longer with us. But today we can acknowledge a magnificent milestone in her reign, and offer due praise for 63 years of quite splendid service”, before styling himself “I remain your deeply grateful, not very humble, and occasionally thoroughly disobedient servant”.

Two of those are potentially treasonous, Piers, and you know what, historically, that entails … er, how d’you fancy an assignment in Syria?
Posted by Tim Fenton at 16:34

He's getting a good kicking in the comments.

I doubt he'll be too fussed about that.

No, but it's still fun reading them.

Her Maj, through an equery, once asked why we were still filming in the Palace gardens when we should have left some time b4.

I read it. It's the sort of thing Viz used to do as a spoof.

In recent years, the obsequiousness of the media towards the royal family has gone into the stratosphere.