All those BBC bashers among the Fourth Estate , and all the papers that are resisting any thought of being overseen by a properly independent press regulator - which would generate a Venn diagram with two very closely matching circles - were falling over themselves to praise John Whittingdale after the latest Licence Fee settlement. And then they, and he, were brought down to earth with a most uncomfortable bump. 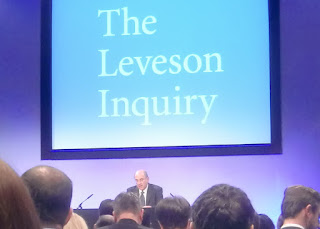 He never really went away

The word that brought them all to earth was Leveson. But, you may say, Leveson reported back in November 2012, and most of the press has set up IPSO and moved on. Well, up to a point, because the Royal Charter on press regulation has passed into law, and the process by which a regulator can apply for recognition under the Charter is now open for business. And there is nothing Whittingdale or his press pals can do about it.

Yes, the so-called Independent Press Standards Organisation (IPSO) has just celebrated its first birthday. But those believing this to be the last shot of the battle should note that none of those papers that signed up to IPSO said anything about the occasion. Campaigning group Hacked Off, on the other hand, had plenty to say, and staged a well-attended protest outside IPSO’s London HQ on Tuesday morning.

The protest was addressed by Hacked Off stalwarts Evan Harris and Brian Cathcart, and also Labour PPC Emily Brothers, who was viciously smeared in the Sun by the deeply unpleasant Rod Liddle, veteran campaigner Peter Tatchell, who has been smeared on a regular basis by the press since the 1983 Bermondsey by-election, and Polly Toynbee of the deeply subversive Guardian, frequently whined at by right-leaning pundits.

Ms Toynbee has let it be known that she for one has no confidence at all in IPSO in a comment piece today (read it HERE). But she need not be unduly worried: the larger part of the press that signed up to IPSO tried to scupper the recognition panel, advancing the argument that they had not approved the process, only to find out that they do not have a veto, or even any privileged status in the matter. They cannot stop it.

Whittingdale was asked about the process, and the normally talkative MP mysteriously went all quiet. “Will costs/damages changes to libel happen  if @impressproject  is recognised. ‘I don't want to be drawn’ on that says @JWhittingdale” observed the BBC’s David Sillito. Whitto, as he is known, must be aware that the Royal Charter process has been set in motion and neither he, nor any other politician, can stop it.

Worse for his boss Young Dave, there is nothing he can do either, no matter how much he may now regret setting up the Leveson Inquiry, and how much he would like to genuflect in the direction of Creepy Uncle Rupe and all the others. He would need a two-thirds majority in both Lords and Commons to do that, and it ain’t going to happen. The realisation is slowly dawning that independent press regulation is all but inevitable, and soon.

And that, folks, is why I signed Hacked Off’s birthday card for IPSO “Look forward to the 2nd birthday … IF THERE IS ONE”. That last chance saloon was for a time, but not for all time.
Posted by Tim Fenton at 15:24