Yesterday, the Prime Minister and Leader of the Opposition attended a service at St Paul’s Cathedral marking the 75th anniversary of the day when the Battle Of Britain ended, the victory of those that Winshton called “the few” over the numerically superior forces of the Luftwaffe in the skies over southern England. Jeremy Corbyn, being atheist and Republican, chose not to sing the National Anthem. 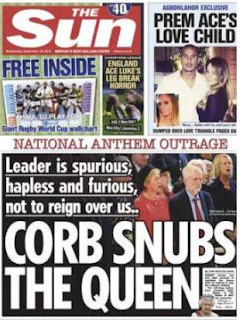 The Sun overflowed with faux outrage as a result: “NATIONAL ANTHEM OUTRAGE … Leader is spurious, hapless and furious, not to reign over us … CORB SNUBS THE QUEEN”. Was she there? Er, no, but look, HE DIDN’T SING THE NATIONAL ANTHEM. Had he done so, all would have been well … at least, until the Sun called him a hypocrite for abandoning his atheist and republican principles. 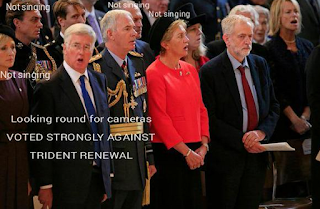 In other words, it was a lose-lose situation in which Corbyn found himself. And he was not the only one not singing the National Anthem at the service, as a helpfully annotated photo has shown. That counted as nothing for the Sun, whose former sister paper, the late and not at all lamented Screws, was so respectful of the Royals that it had their phones hacked, then got Clive Goodman and Glenn Mulcaire to take the fall. 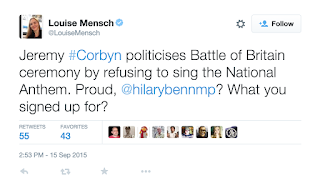 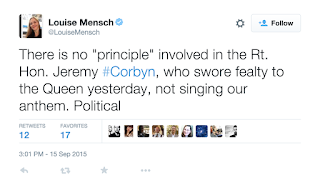 It also counted as nothing with The Usual Suspects, with the pick of the prize idiocy being, not for the first time, (thankfully) Tory MP Louise Mensch, who trilled “Jeremy #Corbyn politicises Battle of Britain ceremony by refusing to sing the National Anthem. Proud, @hilarybennmp? What you signed up for? There is no ‘principle’ involved in the Rt. Hon. Jeremy #Corbyn, who swore fealty to the Queen yesterday, not singing our anthem. Political”. Taking the oath of allegiance does not compel singing the National Anthem. 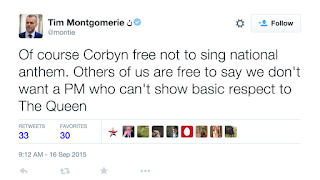 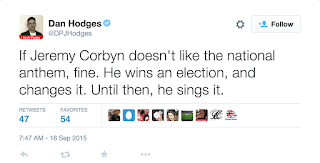 Still, details, eh? The serially clueless Tim Montgomerie was also passing adverse comment: “Of course Corbyn free not to sing national anthem. Others of us are free to say we don't want a PM who can't show basic respect to The Queen”. She still wasn’t there. Would anyone else care to make an equally pointless contribution? 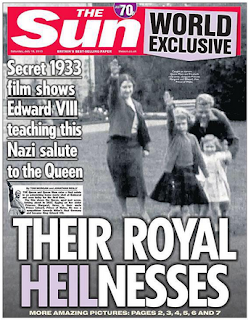 How the Sun shows respect for the Royals

They certainly would, as the Telegraph’s not even slightly celebrated blues artiste Whinging Dan Hodges confirmed, with the magnificently stupid “If Jeremy Corbyn doesn't like the national anthem, fine. He wins an election, and changes it. Until then, he sings it”. Does as he’s told like a good little boy, eh Dan? Like Mil The Younger did, only for clowns like you to dump all over him, eh? Pull the other one.

And what nobody seems to have noticed is that not only did the Sun’s former sister paper hack the same Royals which it now wants everyone to respect, but also that the same Sun as recently as July ran a story suggesting the Queen and Queen Mother gave Nazi salutes, using a home movie which they published against the wishes of the Royal Family. In this they were proudly supported by the grovelling Ms Mensch.

All of which means the Murdoch press has no room to call out anyone for disrespecting the monarchy - not unless they are going to admit that they did it first.
Posted by Tim Fenton at 10:36

I can't help wondering if the "royals" who threw up their right hands in Nazi salutes ever sang the Horst Wessel Song.....I mean, that "Duke" of Windsor and his Yank arm candy were pretty well"in" with the mad Austrian corporal weren't they?

Be interesting if any of the Scum Nazi hacks actually know all the words of the so-called "national" anthem. Especially the bit about crushing the Scots.

You might think the Scum would stop digging before it buries itself in ridicule, like the New Labour who chased its support. But it won't. Which can only be good news for Jeremy Corbyn and a sense of decency. The more it rants, the more it looks like the disgusting gang of racist warmongering cowards it is.

History will catch up eventually. But who knows what damage they'll do to the country in the meantime.

There always going on about football players not singing the NA as well. If I was feeling very nervous and had a camera doing a close up of me, I wouldn't feel like singing either. And I'm a royalist.

How to be Louise Mensch:

1. Wake up.
2. Spot an issue you want to make something of.
3. Pull a name out of a hat.
4. Go on Twitter accusing the name of not supporting/denouncing the issue enough, to your satisfaction.
4A. Possibly accuse them of that cardinal sin, Hypocrisy!
5. Carry on all day.
6. Bathe, sleep, wake, repeat ad infinitum.

This reminds me of the Americans getting in a piss because there's a picture of Obama not having his hand over his heart while people sang the US anthem, or some shit. Anyway, we do not want to be looking to American conservatives on the internet to tell us how to behave, that is not going to end well.