The row following the death of young Tory activist Elliott Johnson in an apparent suicide rumbles on, with the Sunday Times unearthing what looks like more appallingly bad behaviour by former PPC Mark Clarke, together with the impression that CCHQ knew what Clarke was like, and what he was up to, but for reasons best known to themselves did nothing about it. And I have to tell the ST that there is more to explore. 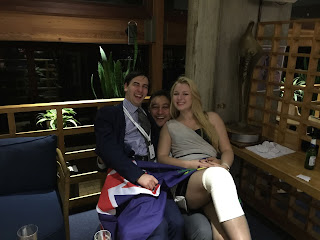 Elliott Johnson at left; behind him is Mark Clarke

The article, by James Lyons and John Boswell, reveals that Johnson recorded a conversation he had when meeting Clarke, and “a second man, André Walker”. That recording was discovered after Johnson’s death, and has been passed to the Police. Clarke, it is claimed, wanted Johnson to withdraw a complaint he had made to CCHQ about Clarke’s behaviour. There are several more such complaints outstanding.

That much is inconvenient to the Tory Party. What is potentially far more damaging for them are claims that suggest Clarke’s actions were, if not sanctioned by them, at the very least allowed to continue. Former Bow Group chairman Ben Harris-Quinney claimed that Clarke “did CCHQ’s ‘dirty work’”. He also suggests that he was threatened with a campaign of anonymous and unattributable, yet organised, abuse. 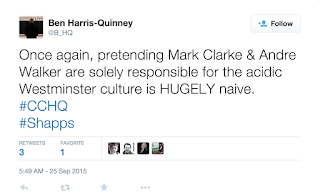 Yet worse is the claim that Clarke, on hearing that Sarah-Jane Sewell, whose departure from Conservative Future (CF) he had previously celebrated, had been hired by the Parliament Street think tank, confronted its chairman Patrick Sullivan, telling him “Your career is over. Everybody in the room will cut you out. You’re dead to me. I know people in the party [my emphasis]. You’re never going to get ahead”.

So what might the Tory Party’s co-chairmen, Andrew Feldman and Grant “Spiv” Shapps, have known of this? Feldman, it is understood, concentrates on the fundraising side: the part involving all those activists is more likely to have been down to Shapps. The Welwyn Hatfield MP may now be far away from the job he left after the General Election, but the connection to Mark Clarke is one that Zelo Street readers will know all too well. 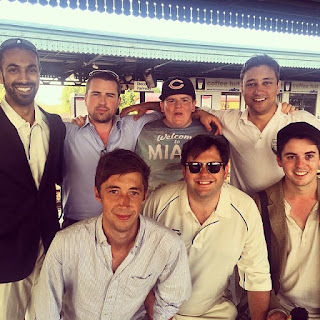 A source helpfully made available this photo of a post-cricket match gathering at Didcot Parkway station last summer. At top right is Mark Clarke. Second from the left, wearing a pale blue shirt, and with Clarke’s right hand on his shoulder, is one Paul Abbott. Who he? Abbott was, at the time, Grant Shapps’ chief of staff. The photo was taken around the time that Ms Sewell was forced out of her role at CF.

It is quite possible that Shapps would have had some knowledge of what was going on, which may make for potentially awkward questions. What may also prove awkward, for Lyons and Boswell, is the presence on the front row of that photo of the odious flannelled fool Henry Cole, formerly tame gofer to the perpetually thirsty Paul Staines at the Guido Fawkes blog. Cole now works for the same organisation as the Sunday Times hacks.

Not that the Sun’s “Westminster Correspondent” will have any power to stop the investigation. And the rest of the press is on the case. This story has some way to run.

[UPDATE 29 September 1730 hours: the bullying scandal has now spread to Rail Minister Claire Perry, who has called on firms to, er, deal with online bullying. This is because India Brummitt, whose name has been pitched as a possible participant in the Elliott Johnson affair - something she has denied - is now a Parliamentary aide to Ms Perry.

Questions are being raised as to whether Ms Perry had any knowledge of the complaints that have been made about Mark Clarke and others. Were that to prove true, it would be most inconvenient to an MP who once Tweeted that she had signed up to the Beat Bullying online Big March. 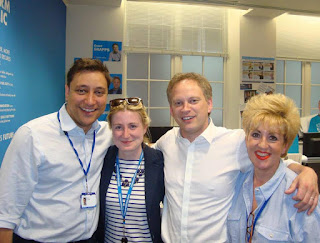 And, for Grant "Spiv" Shapps, of whom questions are being asked as to what he knew about bullying, and when, here is another inconvenient photo. With Shapps are Mark Clarke, India Brummitt, and at right, former deputy party chairman Emma Pidding. It's pretty clear that Shapps knows those whose names are being circulated - so would he have us believe he doesn't know what they were up to?

Grant Shapps has been rather quiet of late. Maybe he has been too quiet]
Posted by Tim Fenton at 10:27

We might have known who would be involved somewhere in this tragedy.

Yes, and THERE HE IS....rictus-grinning, empty-headed arsehole Grant Shapps, the kind of insensitive gimp the tories produce from their public school assembly line. He and Jeremy Hunt make a fine pair of comic bookends.

There's no comedy in the loss of a young life, only horror. But I wouldn't expect Shapps and co to remotely understand that.

When the news of the suicide broke it was mentioned a letter about the bullying (or possibly a recording?) had been passed to police - presumably BTP given the circumstances. Is this heading rapidly to a conflict of interests if Brummitt works for the Rail Minister??

Grant Shapps is scheduled to appear on BBC R4's Any Questions on Friday. Unless he suddenly pulls out of course