After a lull in hostilities, it seems that the attack on Trade Union representatives’ facility time has resumed in earnest, as Rupe’s downmarket troops at the Super Soaraway Currant Bun reach for the book of invective in today’s paper. And added to that invective has been a generous covering of forthright abuse and dishonesty, just to make the Unions concerned look really bad. 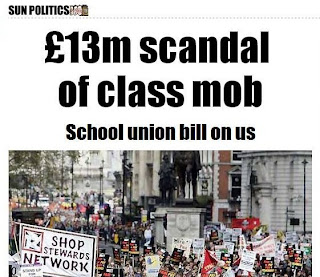 If you're going to pull a whopper, make it a big one

As usual with these stories, there is a nugget of fact buried deep within the pile of fresh steaming bovine by-product: the NUT, NAS/UWT and ATL have a number of workplace representatives. The Sun has seen responses to Freedom of Information (FoI) requests that show there are 633 of them, some seconded full time to union duties. This, though, is insufficiently dramatic.

So first the number is extrapolated to cover the local authorities not replying to the FoI requests, which the paper estimates brings the number to 800. On top of this, the cost of the representatives is put at £13 million a year. But the clinching, and blatantly untrue, conclusion is then told as “A BATTALION of 800 union agitators are [sic] trousering taxpayers’ cash to stir up classroom strikes”.

The piece goes on to describe the workplace representatives as “NUT, NASUWT and ATL officials”, which they are not. This blatant porkie has been backed up by a broadside from Trevor “the Sun is not a swamp that needs draining, honest” Kavanagh, who is clearly slavering to the Pavlovian Max over the prospect of “Oiky” Gove sacking lots of teachers and making others work longer.

But the Sun does have an MP willing to speak in support of their contention, Gavin Williamson, who says “Taxpayers will be angry ... that they are bankrolling union officials who are orchestrating these strikes”. If my taxes were being so spent, I would indeed be angry. But workplace representatives are not “union officials”, nor “agitators”, and are not “stirring up classroom strikes”.

So why does Williamson say something that is blatantly untrue? Successor to long time Tory Party stalwart Patrick Cormack in South Staffordshire, he isn’t on the council of the so-called Trade Union Reform Campaign, so named as it aims to do as much damage to Trade Unions as possible. But he is a past chairman of Conservative Students.

And, as someone who attended the University of Bradford, one can conclude that he is not stupid, and knows what he is saying, as do the hacks at the Sun. So the conclusion has to be that all are well aware of their dishonesty, but that this is what they are prepared to do in order to accomplish their objective. Rupe may not be so keen on Young Dave nowadays, but his hatred of Unions clearly endures.

Meanwhile, TURC haven’t even picked up on the story. Wake up, chaps!