It Was Thirty Years Ago Today

It can have escaped no-one that Britain is marking the thirtieth anniversary of the start of the Falklands conflict, the occasion that the Argentine military junta invaded the islands, which they term Las Malvinas, and the decision was taken by then Prime Minister Margaret Thatcher to send a task force to regain the territory, by force if need be. Less than eighty days later that mission was accomplished. 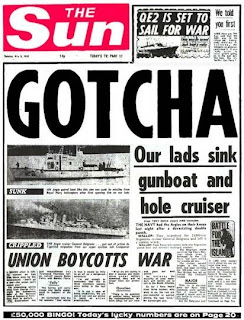 This is one of those events from recent history that is spun very differently, depending on who is asked for their view. But some facts are not in doubt: Thatcher was the most unpopular PM in history before the invasion, the latest round of defence cuts – withdrawing HMS Endurance – gave the Argentines cause to believe the Government was not serious in keeping the islands, and indeed, Nicholas Ridley had told the Commons that Britain couldn’t afford to.

So it should have surprised no-one when the Argentines invaded, partly to deflect public attention from the Junta’s growing domestic unpopularity. Thatcher didn’t really have any realistic option that the one she took – unless she had wanted to be a one-term PM, and a footnote in Tory Party history. 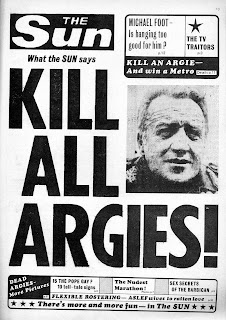 ... and some merely all too realistic

And, contrary to all the guff about what great pals she was with Ronald Reagan, the administration in Washington DC did not support the sending of the task force, preferring instead to back mediation. Only when the Argentines refused to take part did the USA move against them and in favour of the UK. And, despite all the anti-French rhetoric over the years, Paris gave invaluable assistance.

The Argentines had purchased Super Étandard aircraft, along with air launch Exocet missiles, from France. The combination had an initially devastating effect on the task force, but the Argentine reserves were minimal. Efforts on behalf of the Junta to purchase more Exocets were fruitless as the French closed ranks with their fellow EU member state. This was a pivotal action.

Ultimately, the conflict was won by the army with professional soldiers rather than conscripts, by the navy with new build ships rather than World War 2 surplus, and by the air force with the better aircraft – and access to more missiles. And it cost the lives of more than 900 people. If the Falklands conflict did one thing, as Max Hastings has observed, it gave UK politicians the idea of “popular wars”.

And, as for the why-oh-why brigade asking if Britain’s armed forces could do it again, this does not arise. Argentina now has a navy consisting of no more than a few patrol boats, and the country could not afford another war. The Falkland Islands now has an air base at Mount Pleasant that can take the largest aircraft. The rhetoric coming out of Buenos Aires is just so much hot air.

This, given the cost in death and injury of the last scrap, is probably as well.